I’d like to first let you know that this is not another book about zombies, so we can save the discussion for “fast zombies” versus “slow zombies” for another post. But this is a great book for these long winter nights when even logging a 5-miler seems like an accomplishment unto itself. 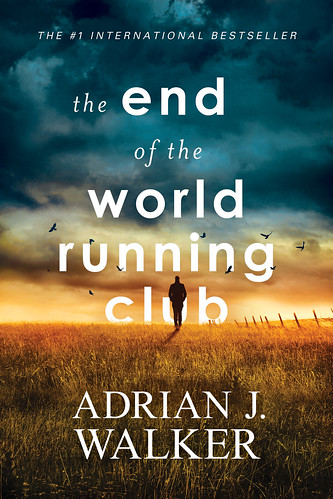 The End of the World Running Club by Adrian J. Walker starts out about someone who definitely isn’t a runner. The main character, Ed(gar) is a self-proclaimed slug. He seems to feel trapped in a work-family-guilt cycle where he knows he’s got it good, but doesn’t appreciate his wife and kids. So, to deal with it, he drinks too much, watches TV when he knows there are more productive things he could be doing (like exercising), and makes half-hearted attempts to connect with his family that leave him feeling like more of a failure. If you’re thinking, “This guys sounds like a jerk,” you are probably not too far off from the truth.

Ed, however, knows he’s a jerk, and he doesn’t like the fact that he falls short of being fully committed to his family. His overeating and drinking are just his way of dealing with it. It’s one of his frequent evening binges that really starts this story in motion and provides context to the friction in his relationships with his wife and children. The “End of the World” is a horrific meteor shower – although “shower” isn’t the right word for a celestial event that basically wipes out the northern hemisphere.

This is where the story starts moving, and you find that Ed, despite basically being a clod, actually does want to keep his family alive, first of all, and then get them to safety, and finally realizes the lengths he’ll go through to make them happy. I really don’t want to give too much of the story away, but essentially he has to travel from Scotland to the southern coast of the British Isles to reunite with his family. A Southern-hemisphere nation has launched a one-shot rescue, but there’s a deadline to get to the ships; and hundreds of miles of burned, dead land pockmarked with craters where there used to be entire villages.

The “Running Club” comes in on this journey south. Ed meets up with some other stragglers who are trying to return to society, but along the way they meet some less-than-idealistic folks. While some of the people he encounters will make you cringe, it’s actually not a far leap from the stage that Walker sets with his masterful description of the barren wasteland that Britain has become. The name of their “Club” is a cynical observation of the absurdity of what it actually took for Ed to become a runner. At one point, Ed basically gives up. As many of us have probably done on a long run, when every step could easily be the one on which you end the run, he just keeps moving forward. Then he starts running. He’s not instantly transformed into any sort of a good runner; it never gets easier for him, but he’s a runner nonetheless.

This is a book you’ll likely want to read more than once. I was so involved with finding out what would happen next – it’s very suspenseful – that I read it really fast, but when I got to the end I realized that I wanted to read it again and spend more time thinking about the various dystopia introduced on Ed’s long run to the ocean.

The End of the World Running Club by Adrian J. Walker is available from Amazon here for around $16, and the Washington County Cooperative Library has multiple copies including as an ebook. There’s a waitlist for this book at the library, but if you’re like me, you’ll want to read it multiple times; and it’s the kind of book your friends will be eager to borrow. It’s a suspenseful and hopeful take on an apocalyptic theme, with just enough running thrown in to mean a little more to readers who have toughed out some miles the going gets rough.

If you read it, be sure to drop us a line and let us know how you liked it!

2 Comments on Run Oregon Bookshelf: The End of the World Running Club