The 50k distance has become my standard distance, so I was excited to try out Oregon Trail Run’s Mary’s Peak 50k. They also had a 50 mile or 25k option, but given the rest of my summer calendar, the 50k was a sweet spot for me.

It was graduation weekend for many schools in Corvallis, so I didn’t bother trying to find a hotel to stay in the night prior. I just woke up at 4 AM and made the ~2 hour drive from Portland to Blodgett that morning. I arrived around 6:45 AM (the first shuttle bus was leaving at 7:10 and the second/final was scheduled to leave at 7:20). There was ample parking just a short walk from the finish area and I had plenty of time to pick up my packet, run my swag back to my car (after the volunteers graciously let me exchange my shirt for a more appropriate size), use the porta potty, chat with race director Mike, and relax in general. I took the 2nd shuttle bus, which was running just a few minutes behind schedule.

I chatted with two guys on the bus about the Portland Marathon controversy and how they came upon Mary’s Peak as their first trail event. About 15 minutes into our 20 minute shuttle, we came to a game of chicken with the first bus coming back down the hill. Our driver had to do some anxiety-inducing maneuvering to make it past (meanwhile, the 50M runners were trying to run down the same road and had to navigate around the buses). We all made it in one piece, but we had a bit of an adventure before we even made it to the start line! The poor runners on the first shuttle bus had been waiting in the chilly forest for us for almost 40 minutes at this point, though the spectacular views surely kept them company. 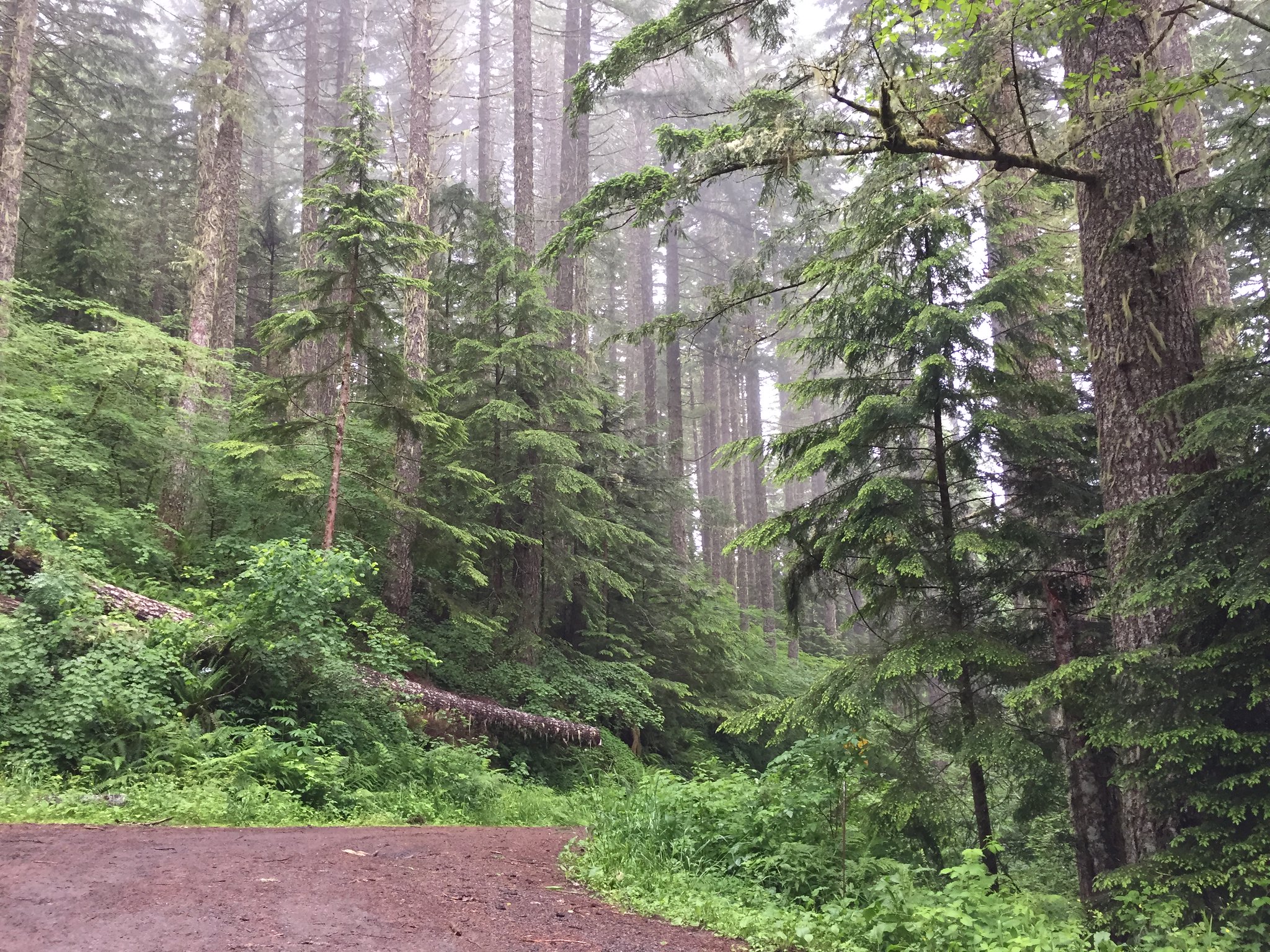 Once we all arrived, Mike gave us the course breakdown, provided his personal cell phone number in case anyone needed anything at all, and impressed us with his knowledge of the forest. Soon, we were off! The first section was a lovely downhill on the forestry road we just drove up and it was tempting to sprint, as downhills are my favorite. We made our first turn onto gorgeous singletrack and I could feel the day beginning to warm up already.

The course was muddy and slick and the singletrack was rolling with a net gain. After a few miles, we popped out onto the forestry road again for our first aid station and had a good 7 miles of uphill ahead of us to the top of Mary’s Peak. It was grueling and after a few minutes of breaking away from the pack, I found myself alone for most of it. No sign of any other runners, no other hikers or bikers, no photographers, no volunteers…just me. 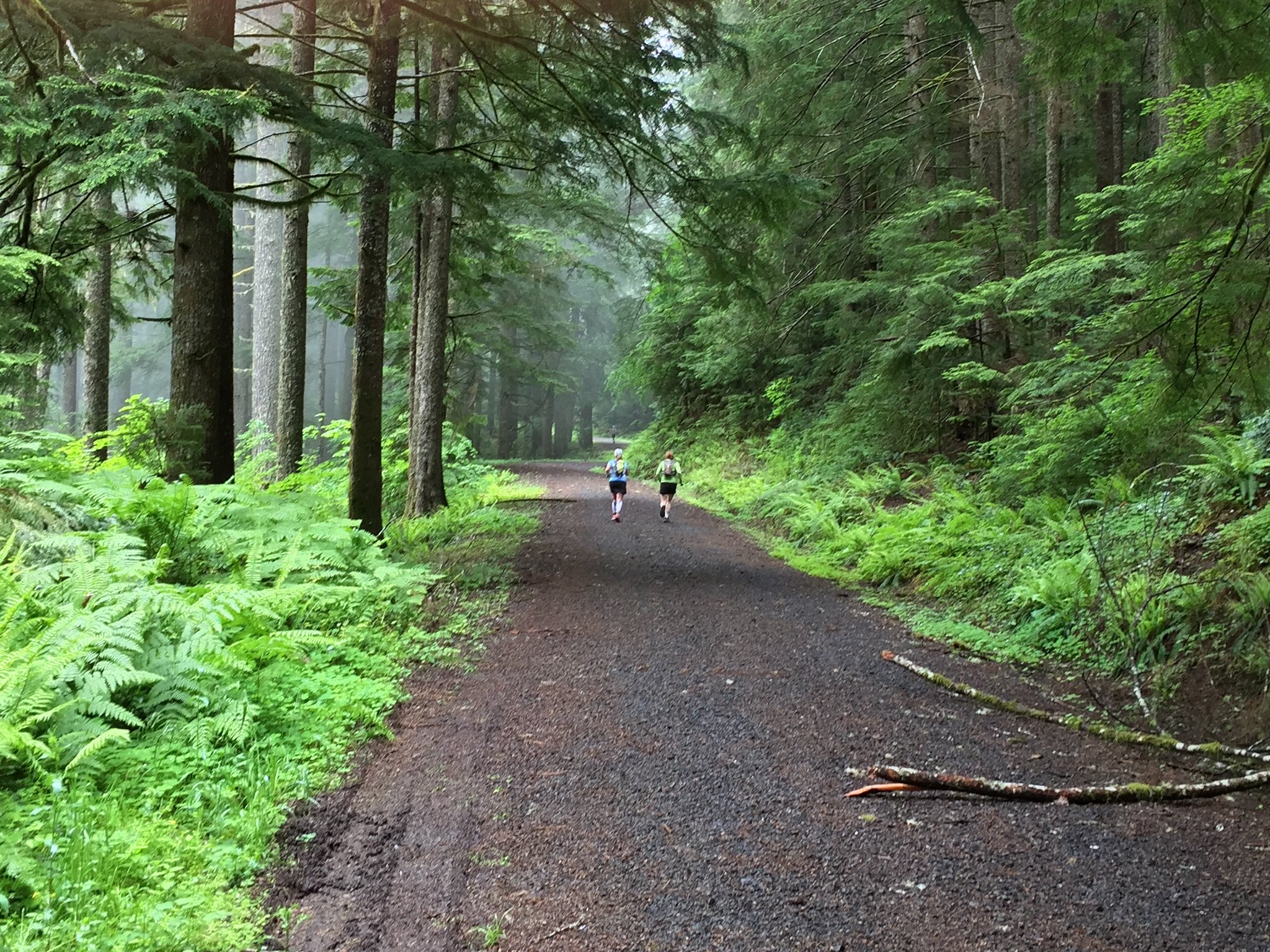 Eventually we turned onto singletrack again after a forestry road gate (the trail was well-marked with pink signs and black arrows) and the true hill climbing began. The trail was stunning; the trees and underbrush were thick and lush, the switchbacks relentless. A few of the 50 milers were on their way down and I was greeted with “good job!” and “keep it up”, which always feels nice. 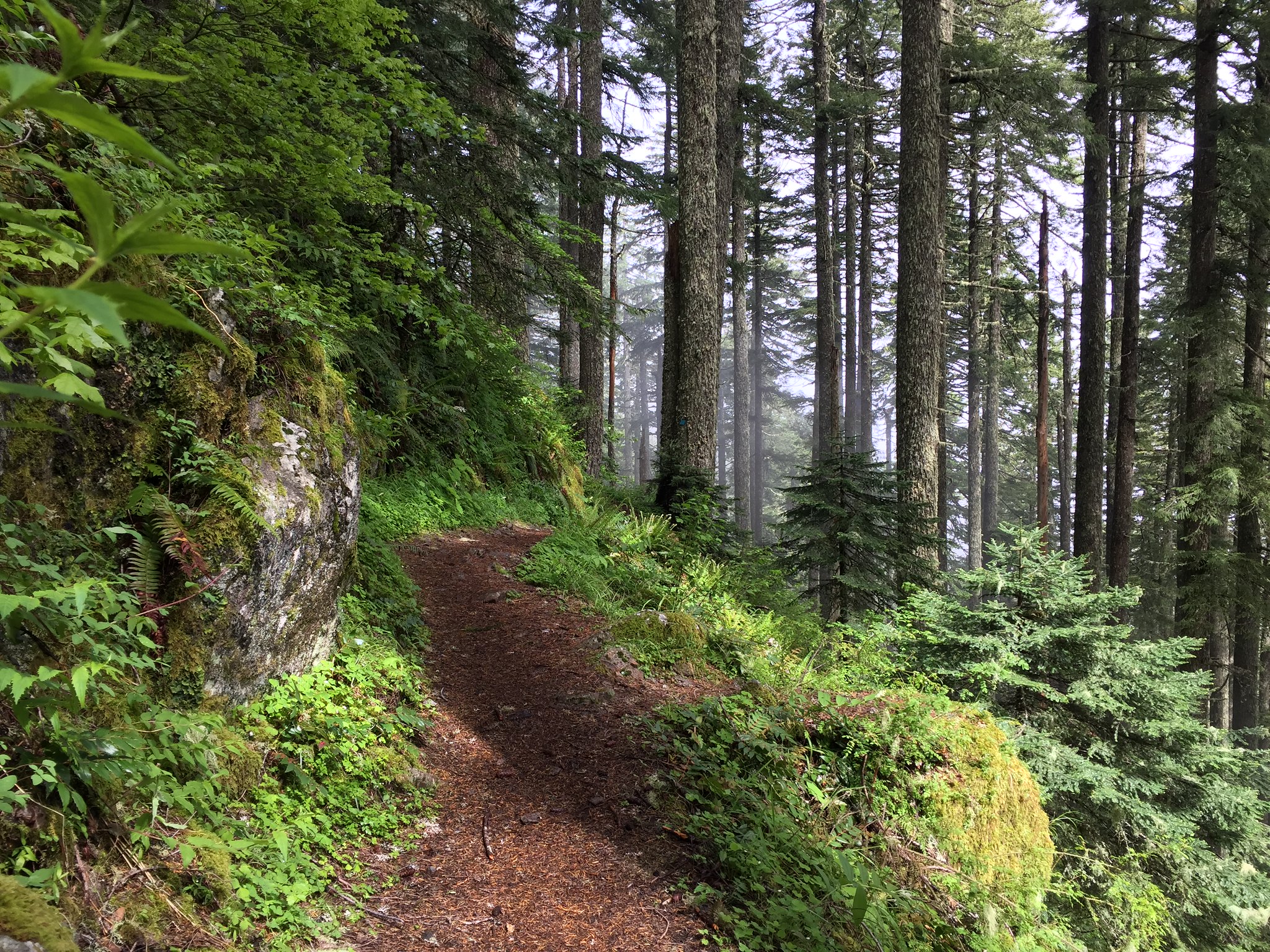 After many slow uphill miles, we popped out into a meadow and finally saw some volunteers. A man with a dog told me “Just that way, then you’ll circle back to me in about 6-7 minutes.” “Challenge accepted!” I told him (for the record, it took me exactly 10 minutes to make it back). Mary’s Peak would have given 360 degree views of the coast range and valley, but sadly we were pretty clouded in. There was also a radio tower, loads of wildflowers, and an empty picnic table. I didn’t linger. 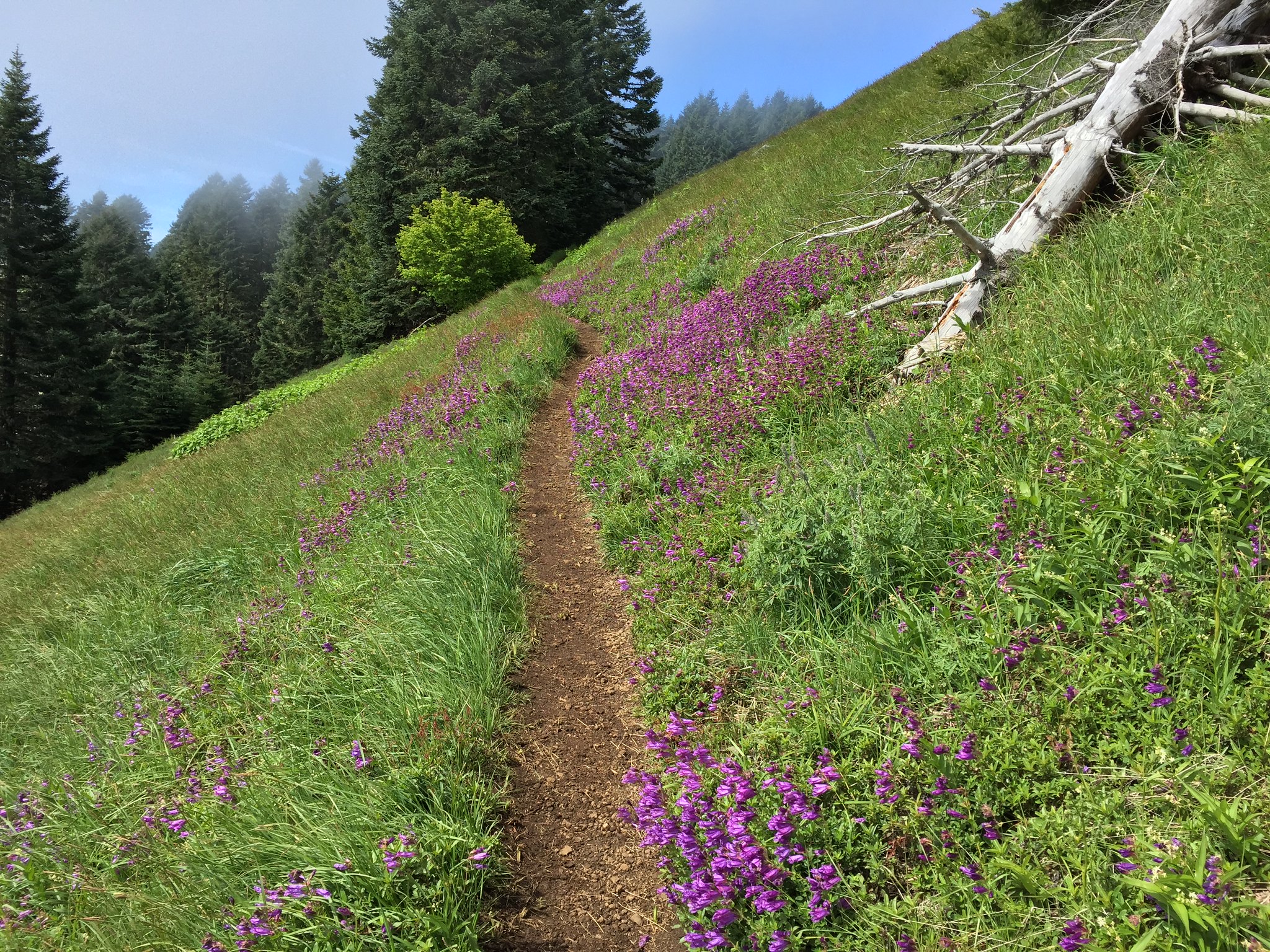 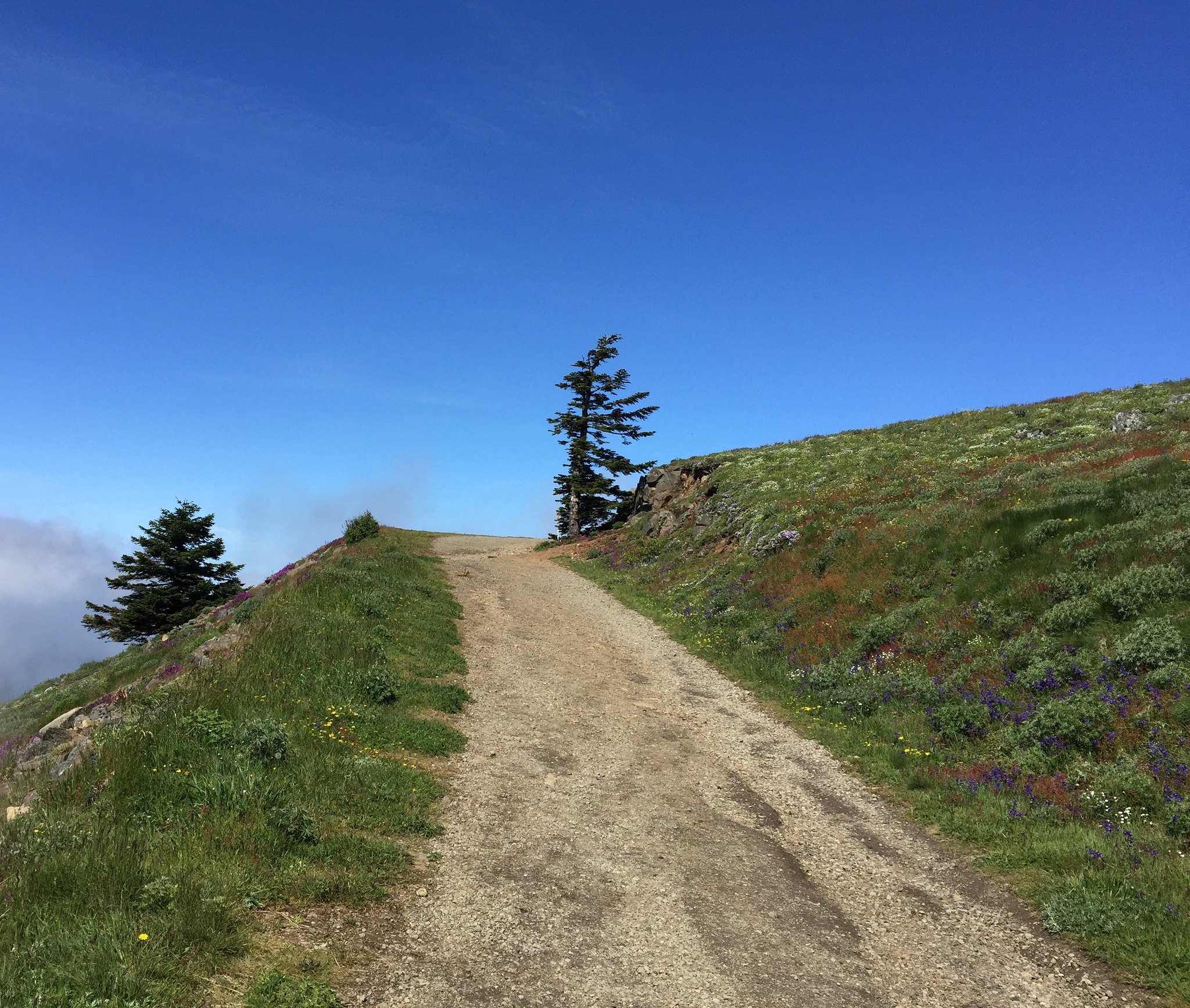 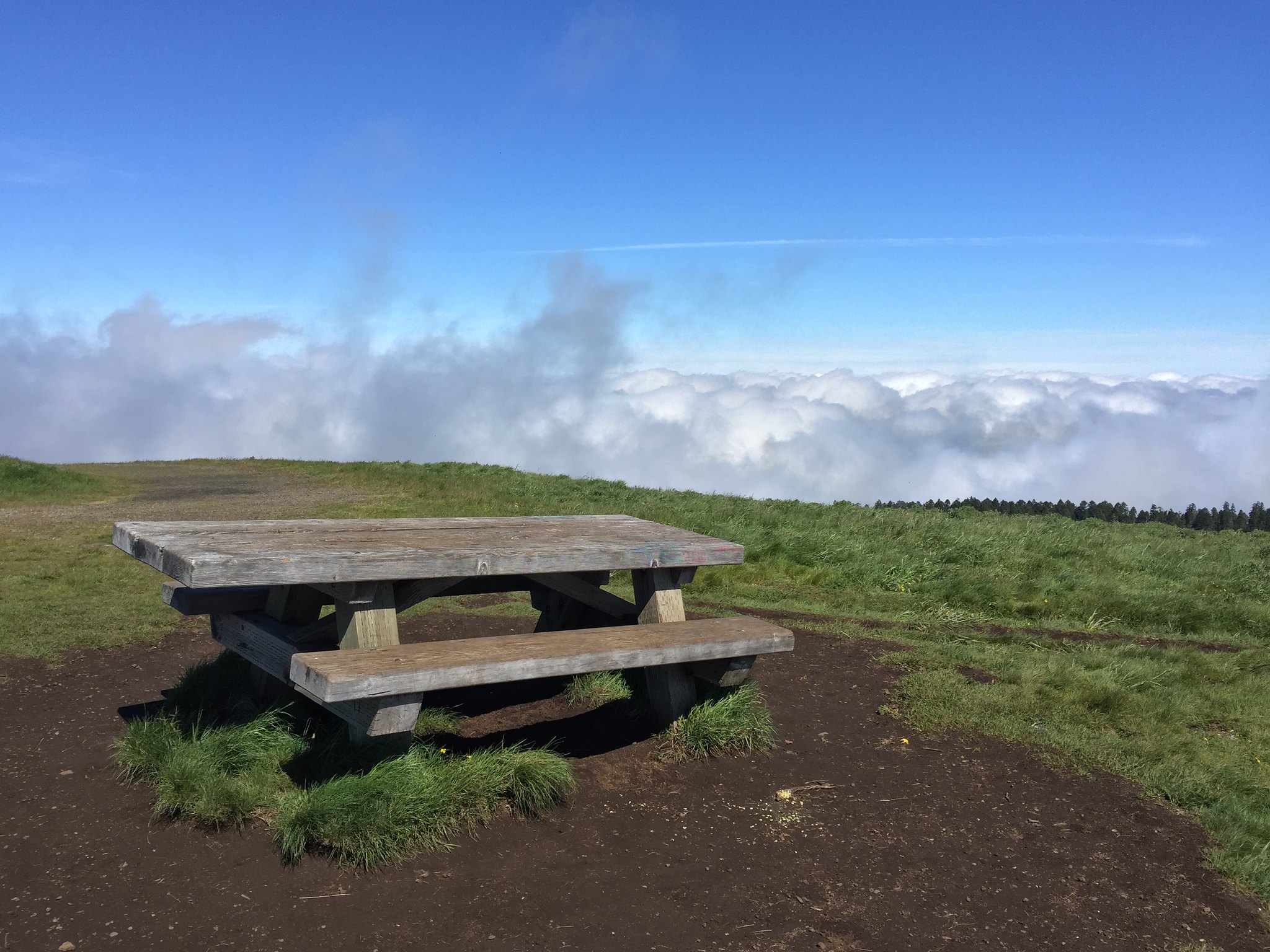 After passing back by the volunteer, it was less than 1/4 mile to the aid station. Here, I grabbed an Oreo, a few chips, and a cup of Coke – standard ultra fare. The 50 milers went south and I headed north into the woods. This section was easily the best part of the race. It was singletrack perfection in the moody forest. The temperature was cooler in the fog and the switchbacks provided a nice mental challenge. I picked up the pace and booked it for miles. Eventually I caught another runner and thought “I’m so glad to see another 50k-er!” She grunted and let me pass, making it obvious she wasn’t up for chatting. Shrug. 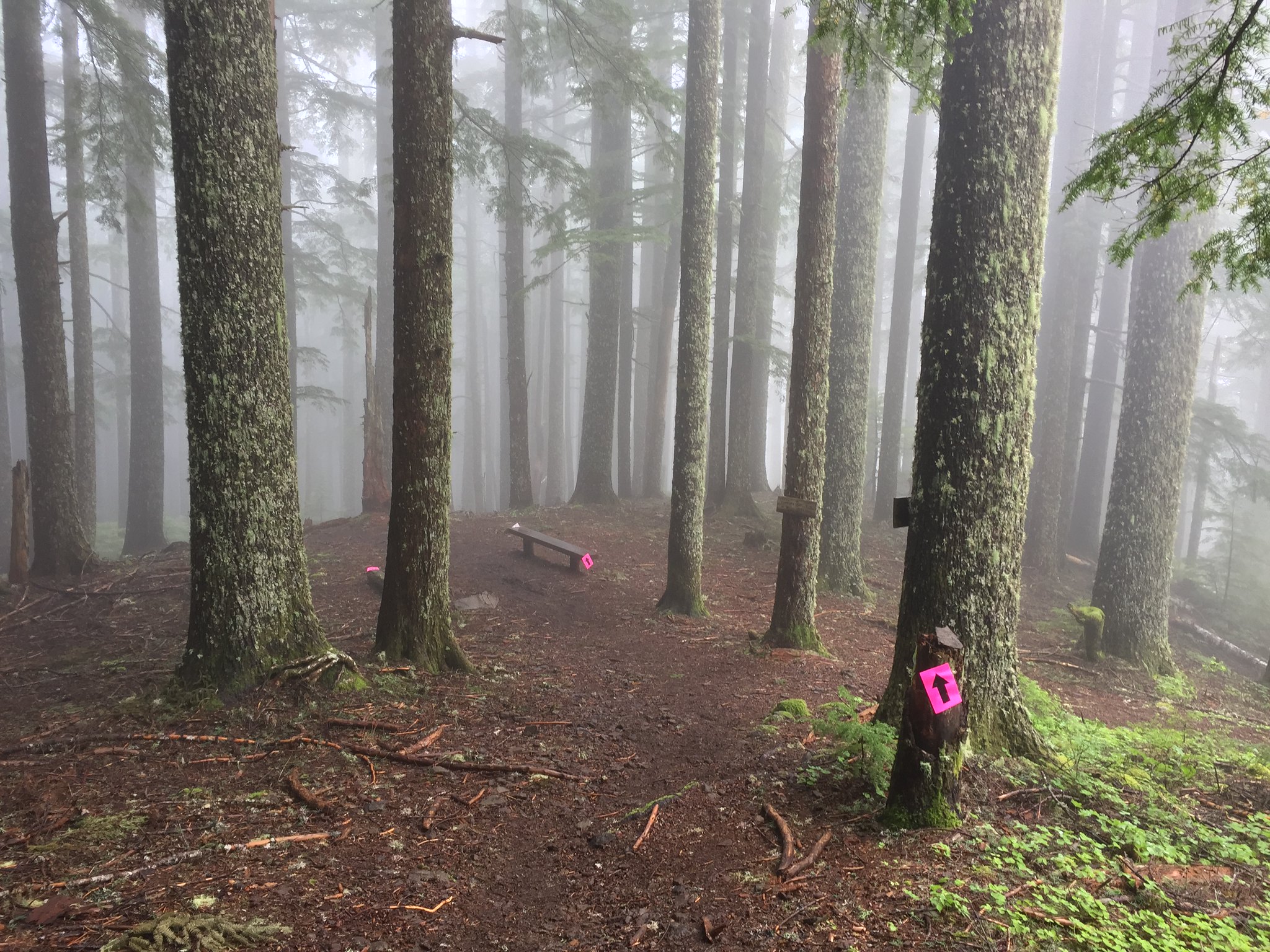 The course returned to the very first aid station and then backtracked along the first singletrack section we ran up initially. It seemed to be uphill both ways, to me. From here, I ran with 2 other ladies who were up for some company. We hit an intersection of forestry road and another girl joined us. From here, our group was enjoying the solidarity as the course continued its rolling nature. Although it was net downhill, any sort of uphill was rough and [for me] unrunnable. I felt like I power-hiked most of the course.

We were all vaguely aware of the cutoff time and at our next aid station, we inquired about what time the cutoff was and if we were at the proper aid station for it. No one seemed to have a clue what we were talking about, which was a bit disappointing. We weren’t in jeopardy of missing it, but it seemed reasonable that the volunteers would have this information. I grabbed another Oreo, poured myself another cup of Coke, ate a few more chips (I was wishing for some refreshing orange slices at this point in the day), and we all took off again. 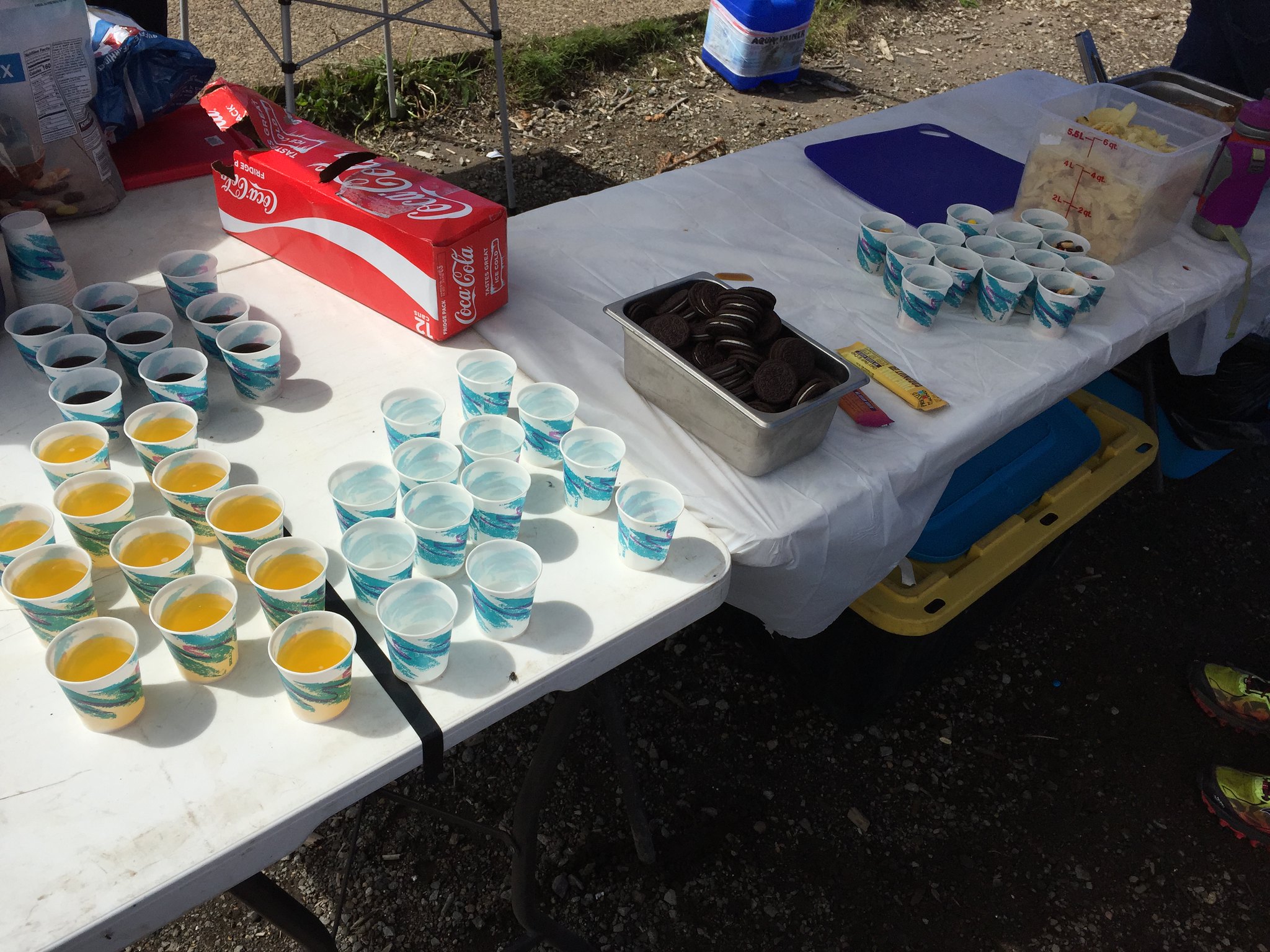 We came up to a section of the forest that was clear-cut and we found an unmanned water station. The day was starting to really heat up, so we all refilled out bladders and bottles and caught up with a guy who had clearly taken a bit of a fall earlier in the race. And then there were 5. 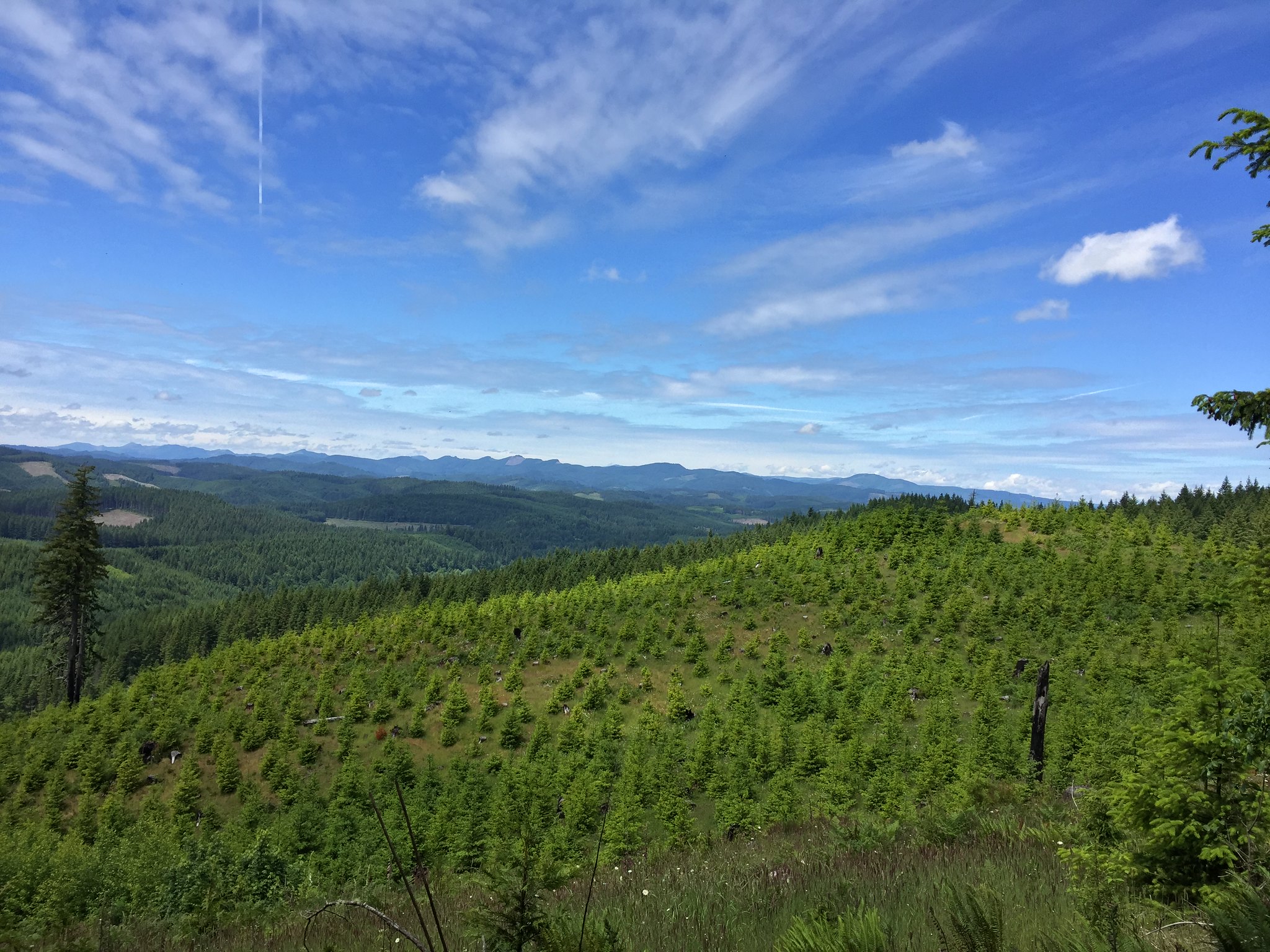 Winding through the forest, we took turns who was pacing, who we were chatting with, and who jumped at the snake(s) first! I was grateful for the company. As our various strengths became obvious, members of the pack went on ahead and/or took up the rear. I ended up finishing the last bit of seemingly endless forestry roads of the race with a girl my age from Albany and I enjoyed getting to know her more. We came into the final aid station, joking and cheery! The volunteers told us we had about 4.5 miles to go. I looked at my GPS watch, did some calculating, thanked them all, and we took off. We ran down a pretty gnarly section of forestry road (dried mud ruts) and eventually came to the infamous “gate”. “Good, only about half mile to go!” I said as I photographed the wildflowers. After a few more steps, we came upon a depressing sign telling us there were, in fact, 1.7 miles to go. Disappointed, we discussed whether it was my watch that was horribly inaccurate or if we were given misinformation from the aid station. In any case, we plodded along, laughing at the noisy rooster, cooing at the barking dog, and curiously looking at the strange castle/church/mansion in the middle of the forest. 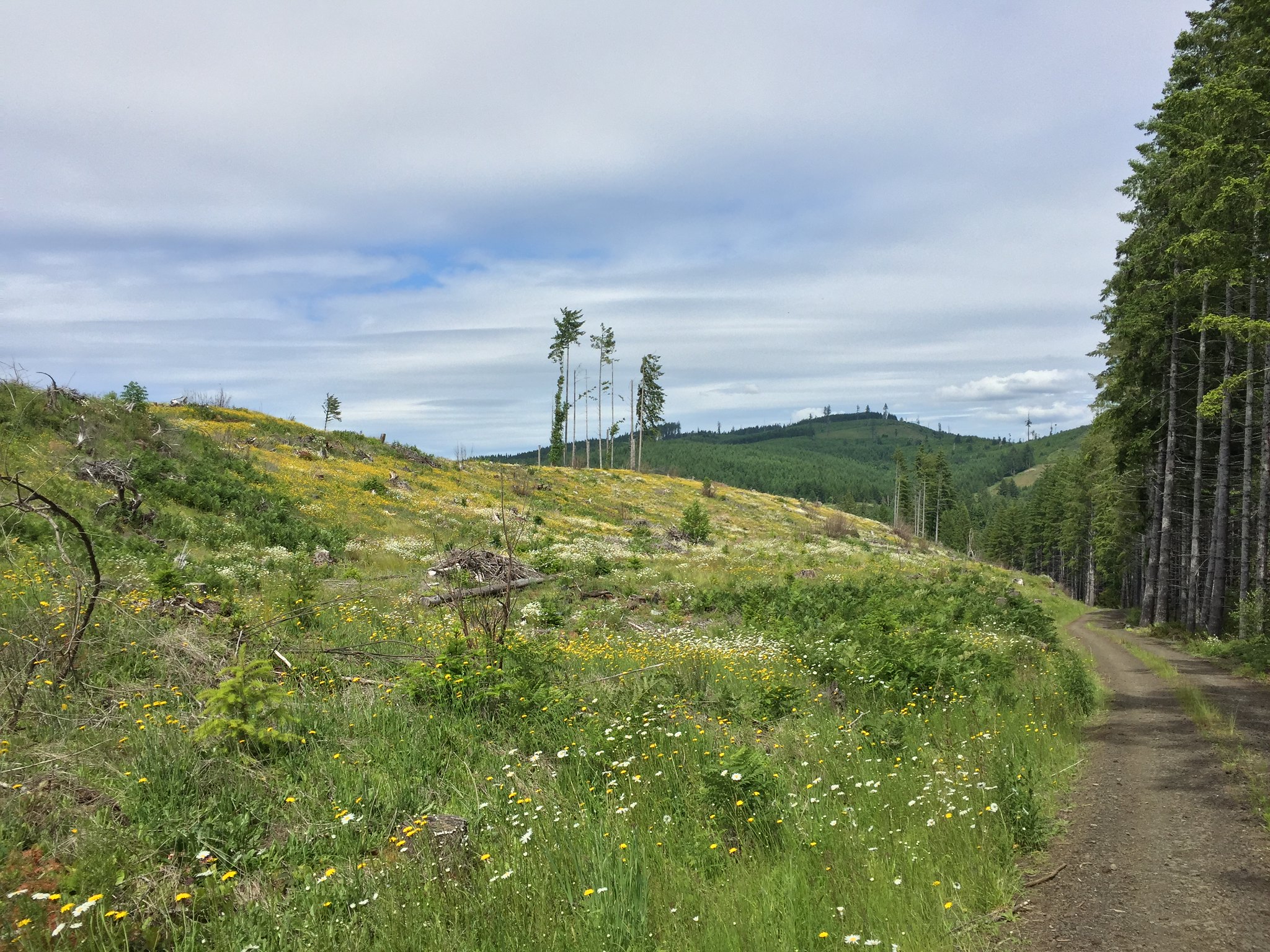 Because Mary’s Peak doesn’t mess around, the final stretch was uphill. We “sprint” finished and were treated with finisher pint glasses, watermelon, all-you-can-eat spaghetti, all-you-can-drink soda, massage chairs, and general relaxation at the finish line. 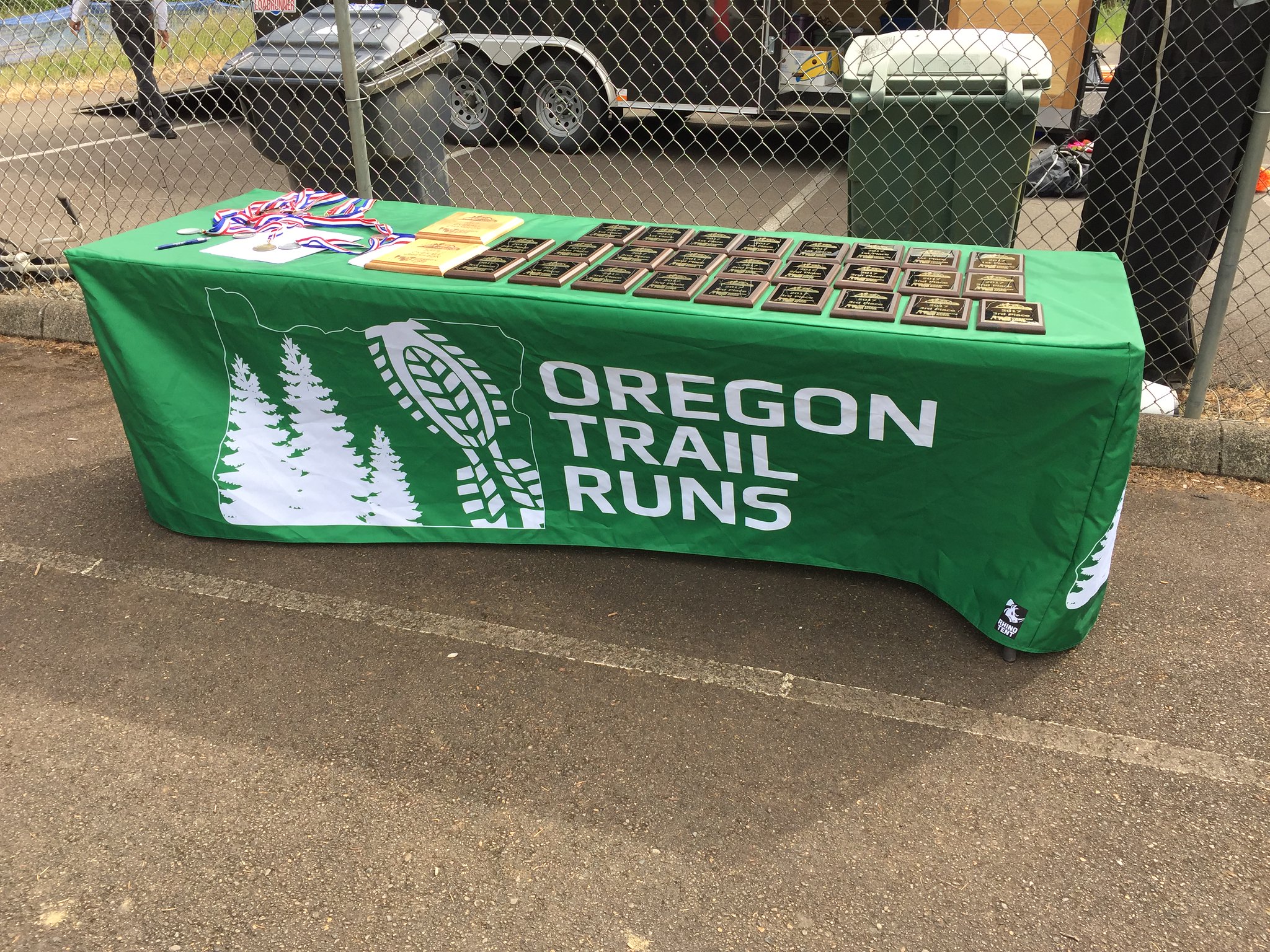 I hung around for about 45 minutes, laughing with other runners, enjoying the beautiful afternoon, and watching the other racers (in both the 50k and 50m events) come across the finish line. Race days are the best.

Mary’s Peak was a lot of fun and I met such great people at this event. Congrats to all my fellow finishers – it wasn’t easy!