For many runners in the Portland area, the Hippie Chick Half Marathon has been a Mother’s Day tradition for many years. Since its move to Hillsboro, participants of this women-only event dodn’t have to worry about an early sellout date anymore, and the flat roads and open spaces allow for a variety of distances. Race day is on Saturday, May 13th, and for the first time this year, there will be the option to run a 15k (9.3 miles) in addition to the half marathon (13.1) and quarter marathon (6.55). For those runners who bring their families along, there is also a free kids run for youngsters ages 3-10.

The race starts and ends at the Hillsboro Ballpark, which is a great venue since it offers open turf fields (not muddy grass), bleachers to relax in, open sunny spaces as well as covered shady (or dry) areas, and flush toilets in addition to porta potties. The courses for all three distances head west from the start line and are mostly flat. The 15k and quarter marathon (6.55 miles; just a little over a 10k) are out and back courses, while the half marathon adds a little detour to the south to its course as well. Water and aid stations will be less than two miles apart; the quarter marathon has four station, the 15k six, and the half marathon will offer seven. 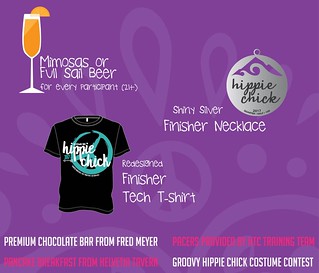 After the race, each participant receives a finisher’s necklace, pancake breakfast, and  beer or mimosas for those of legal drinking age. Music will play, and during the award ceremony prizes are given to the top three finishers in each distance as well as awards to the top three in each age group.

To avoid delays on race morning, you can pick up your race packet on Thursday at the Downtown Foot Traffic or on Friday at West Side Foot Traffic. While there is plenty of parking near the stadium, carpooling will make parking easier for everybody.