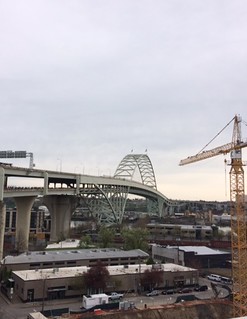 This year was my fourth running of Terrapin’s Bridge to Brews 8k. I like unique routes, and being the only Portland race that takes runners across the Fremont Bridge (I-405), it definitely qualifies as unique. Sunday morning was a cool and overcast day, which made it perfect running weather. We found street parking just two blocks away from the start line, and packet pickup was quick and easy. My husband had accompanied me to this race (since I had promised to share my beer tasting tokens with him), so I didn’t have to gear check my warmup clothes. The start was to be at 8:40am, so I made my way to the starting area around 8:30. It’s good that I did and didn’t wait for any announcements, since they were really hard to hear, even while in line for the start. I sorted myself into my pace group based on the signs held up by volunteers, and soon I heard the starting horn.

During the first mile of the course heading west on downtown streets I had to do some dodging and darting to avoid potholes, groups of walkers, MAX rails, and I was briefly stopped to let a MAX train pass. I soon reached the one mile mark and first water station at Flanders and 15th Ave, and then the course took us down the on-ramp onto I-405 and towards the Fremont Bridge. On the bridge, runners were kept on the shoulder and the rightmost lane, and a long line of orange cones separated us from northbound traffic on I-405.

Running up and across the bridge we were treated to beautiful views of the city, the river, and the mountain, and many people stopped for pictures and selfies (me included, which made mile 2 my slowest mile of the race). Mile 3 was a nice and easy downhill down and off the bridge near Legacy Hospital. Soon after, I passed the next aid station, offering water, electrolyte drink, and energy gels. The split (and following merge) between the 10k and 8k courses was very well laid out and staffed with volunteers who pointed out the correct way for runners. A nice downhill towards Interstate Ave gave my legs another boost for the next uphill to cross the Steel Bridge, and then the finish line came into sight on Naito Pkwy. 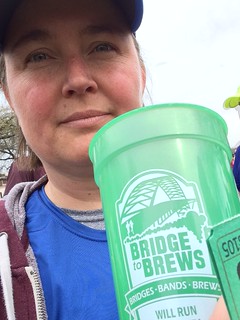 Included in the race registration was a tasting cup and ten tasting tickets for the beerfest that was set up as part of the finish party. There were about five breweries, two wineries, two distilleries, and once cidery. Due to the large number or participants and the relatively few tasting stations, lines got very long very quickly. The wineries did not have many patrons, neither did the distilleries, and after we had stood in line for a brewery for over 20 minutes, we gave up on trying to taste different varieties and got a full fill of the pint cup instead.

I found the race very enjoyable, and the course different from other downtown races. The long lines at the beer tasting event have been a challenge for the past three years that I have attended, and I’m not sure how they can be avoided. I would definitely run the race again!