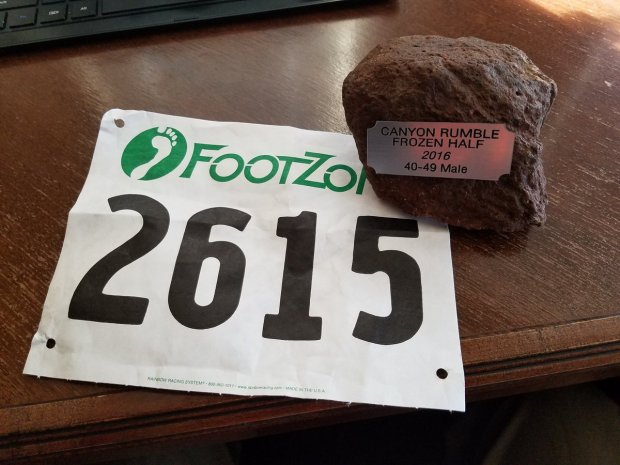 Back in mid-November, I wrote a preview for this race with a bit of a warning about the weather being a factor. Let me just say, first of all, that the weather was spectacular! This was the 5th annual running of the Canyon Rumble Frozen Half, which is put on by Madras Runners, and without a doubt, this is a race I will do again.

This past year has been a real change for me, as I have sought to be more than just a writer who happens to run for fun. As I embraced the challenge of running competitively for the first time, it changed the way I looked at every race I entered and therefore effected my outcome. Coming into this race, I had already run 7 halves and was simply hoping for another decent result similar to Silver Falls. In that race I set my trail half PR and came away excited about the Rumble. To be honest, I had high hopes of even finishing in the top 3 as this tends to be more of a small town race...until all the fast guys showed up!

Before I get to the finish, let’s talk about the course. All 3 distances share a start/finish, are out and back races, must tackle the “M” hill. This hill is a switch-backing doozy that hits you just 1/2 mile into the race. The paved trail takes you straight up and then straight back down again before sending runners into Willow Canyon. The downhill, westerly traveling trail starts out as a fun, single track, semi-rocky section that eventually gives way to a dirt/gravel road. Once to the midway point of the half, the views of majestic Mt. Jefferson are stunning. At that point I was still within 1/4 mile of the leaders but we had all been cruising downhill. After turning around, I was quickly reminded that I had just run 6.55 miles downhill…and the fast guys weren’t slowing down.

I seemed to find a good rythym as I worked my way back to town and was feeling generally good about my time as I caught and passed one runner while keeping another runner in my sight. What I couldn’t shake was the gnawing feeling that the M hill was going to really stink on the way back up. Sure enough, as much as I wanted to race to the top, I found myself admiring the dudes who had already beaten the hill, especially the first two.

Those dudes were Brandon Hoffman of Bend and Remi Boille of Portland (St. Johns). Brandon won the race last year with a time I thought I might be able to compete with. This year was a completely different animal as Brandon scorched the course record and everyone else except for Remi. Brandon’s time of 1:21:22 and Remi’s time of 1:21:55 were 5 minutes faster than the 3rd finisher, Alex Gay of Portland. Jordan Firman, Jordan Wolfe and Sam Schwarz, all from Bend, were your 4th, 5th and 6th place finishers respectively. Mark Benedict of Portland was 7th and I took 8th. The top female was Amber Singh of Klamath Falls who came in 13th. Amber has been the top female 4 out of the 5 times this race has been run.

Afterwards, I took some time to talk to race organizers Jamie and Trevor. At the beginning of each race, Trevor has an elk bugle that he blows to send everyone off (have you ever heard of such a thing?!). While the event is still a somewhat small town affair, news of this race is getting out there. Jamie loves to see the Portland runners coming over and providing such excellent competition and it is a reminder that we are all just one, big, awesome community! Both Jamie and Trevor were not only on top of everything to do with the Rumble, but they were personally there at the finish to congratulate each and every runner/walker who came in.

In the end, I came away with a new trail half PR, a cool rock for winning my age category (and Masters Division), a sweet new beanie, met some really cool guys and gals from Portland and gained a whole new appreciation for my Madras friends to the north. The Canyon Rumble takes place every year in early December and it is a race I highly recommend. Hopefully, I will see you there next year!