When you sign up for a late-October race, you never know which weather will be thrown at you, so as I contemplated my costume options for this year's Run Like Hell 10k, I took into consideration the fact that I might get soaked during the run. This year's theme was ComicCon, which left the door wide open for all sorts of fandoms to be represented at the run. After throwing around ideas about Ravenclaw, Disney Princess, and superheroes, I finally decided on a black t-shirt saying "A Girl Has No Costume" giving a nod to Arya of Game of Thrones.

Run Like Hell offered three different distances this year: The half marathon, the 10k, and the 5k. I had chosen the 10k for myself, but since my friend was tackling her very first half marathon, I was at the start area at Pioneer Courthouse Square bright and early before the sun came up. It wasn’t raining and wasn’t too cold, but we were wondering if the dozens (or hundreds) of crows cawing in the trees were an omen of things to come. The start/finish area at the Square was again very well set up: Registration, packet pickup and gear check were at the top of the stairs on the southwest corner of the square, near the start line on Broadway. At the bottom (and Northeast corner) of the square were the stage, food and drink, as well as standing tables throughout the square. A long row of porta potties was lined up along the east edge of the square, and there were so many of them that I never saw a line.

Announcements were easy to hear, and we made our way to the start line for my friend’s start of the half marathon at 7:45am. Close to 700 runners and walkers in a variety of costumes tackled Terwilliger Blvd this time and lived to tell the tale! Next up was the kids run, which was a mascot-lead 1/4 mile out-and-back dash on Broadway. Before too long it was time for me to drop off my sweater at the gear check and line up for the 10k. The course was wide and easy to follow, and it never felt too crowded. As we turned onto Naito Blvd just 1/4 mile into our run, I saw half marathoners speeding by who already completed close to seven miles! After a short stretch on Naito, we turned left onto Couch, then north onto 9th. On Couch and 9th there were musicians spaced about two blocks apart, and listening to the different types of music made this mile pass by quickly. 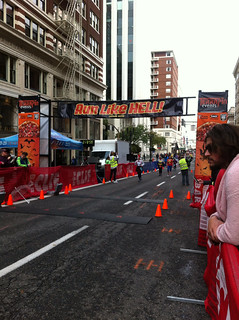 We turned east onto Overton, then north onto 17th. After that, in order to avoid all Amtrak rail crossings, the course followed a zig-zag pattern of one block over, then one block up until the turnaround at mile 3.5. We zig-zagged back (and I heard an Amtrak train blowing its horn, knowing that with a different course it could have paused the race at the train tracks), and after the Musical Mile on 9th and Couch we turned south onto Broadway, finishing the race with a slight uphill at Broadway and Alder.

After crossing the finish line, there was water and bananas right away, which I appreciated a lot. Medals were handed to the half marathon finishers only (and race bibs of different colors made it easy for the volunteers to know which race a person had just completed). My friend finished her half strong and faster than she expected!

Back at the square (half a block walk from the finish line) music was playing, vendors were giving away samples of drinks, chips and granola bars. The post-race food provided by the race itself was half a banana and a slice of bread with nutbutter. It hit the spot and refueled well, but I had hoped for a cup of soup or chili as we had received at this race in past years. Drinks were provided by Lagunitas Brewing and Two Town Ciders: both companies brought several varieties to choose from, and since we had two drink tickets on our bibs, we got to try several. After catching our breath, refueling and rehydrating, we stayed long enough to see the beginning of the costume contest, before making our way back to our car and home. 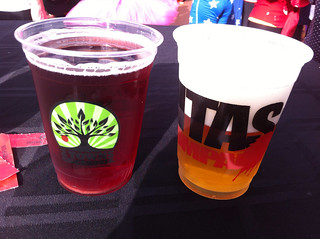 Overall I’m very happy with the race experience. Street parking is free on Sunday mornings, and we found a spot not too far from the start. The start/finish area was well organized and signs clearly visible. On the 10k course we had three water stations, and one Clif Shot fuel station, which we passed twice. The start and finish areas had lots of space and were clearly marked too. Certainly a great option for a late-October urban race.