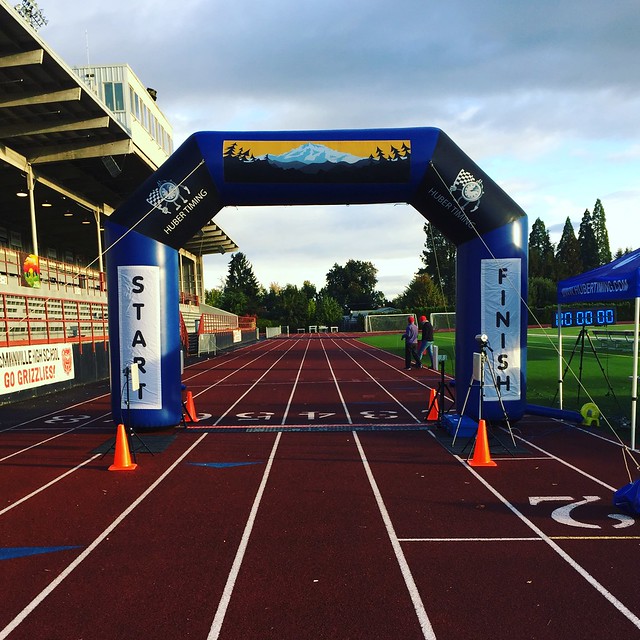 I'm a big believer that it's always great to mix in small and local races through your race calendar. Sometimes we can all get drawn in to the shirts, medals, and atmosphere (which are all great in their own rights), but it's still fun to remember the small guys. My 4-year-old and I decided to have a daddy/daughter race day in McMinnville at their annual Runtoberfest 5k, which benefits the McMinnville Education Foundation.

The race started at Wortman Stadium and finished at the same location, complete with a short track finish. Despite cool temperatures when we arrived, it was great to see local runners warming up and local volunteers getting ready for the day. Actually, though the day started off a bit chilly, the rain held off and it ended up being pretty solid running weather. Huber Timing was on site and the McMinnville Cheer Squad was getting their instructions. I will just say right off the bat that they did a great job throughout the day. I know my daughter (a cheerleader herself) loved having them there.

The course was pretty simple, mixing in some residential neighborhoods and long, straight stretches of rural roads just outside of town. There was only one really small hill and the rest was straight as can be. I could see this being a PR course for those who are interested in that. With only 2 “major” street crossings, there was hardly any other traffic on the roads.

There were a few extremely minor hiccups – as happens sometimes with small races – though none were even close to being a problem for me. It seemed that there may have been some miscommunication, as the first main intersection crossing (Lafayette Street) was announced as having police assistance, but there didn’t appear to be any at my arrival. This left some runners waiting for the light to change. The police assistance was around at the intersection on the way back, though I did need to stop again regardless. Honestly, I didn’t really care. There was also a few happy volunteers shouting out an encouraging “less than a mile to go” when I knew we were closer to halfway. Obviously, these are relatively minor (and easily fixable) and the course measured pretty close to being true.

Following the race (which was won by Run Oregon and McMinnville’s own Brian Bernier), there were some simple refreshments, highlighted by local company Betty Lou’s. We stuck around to see all 93 runners finish on the track before calling it a day. And to be honest, there aren’t many cities greater to hang out in after a race than McMinnville. My daughter and I had cinnamon rolls at the Red Fox Bakery, walked the beautiful 3rd Avenue main drag, checked out the views of McMenamins Hotel Oregon Rooftop Bar, and had lunch at Grain Station Brew Works. There was not much more I could have asked for on an October race day!

1 Comment on Keeping it Simple: A Run Oregon recap of the 2016 Runtoberfest 5k in McMinnville