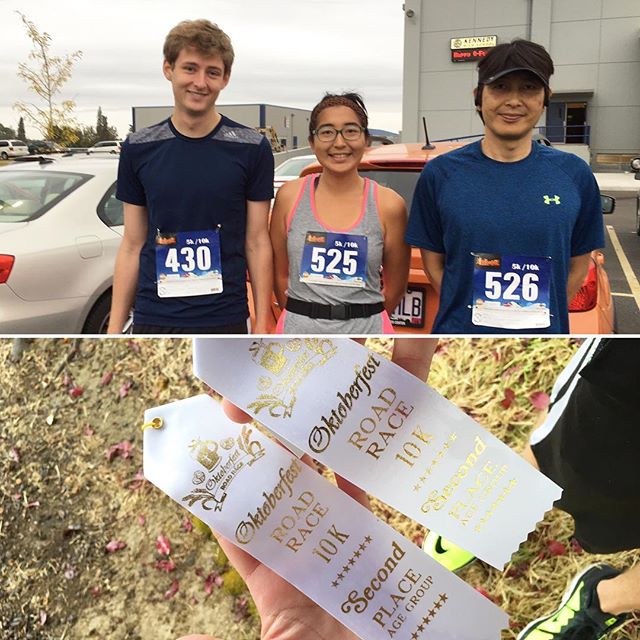 After a wet Spring, most of us here in Oregon appreciated a relatively dry and (mostly) mild summer. The last week has been especially nice, so it was a little disconcerting to see grey skies as I woke up on race day. My daughters (7 & 4) and I had made a plan to run together (one actually running and one in our running stroller), so we were excited nonetheless. I hadn't run this race in a few years, and I was happy to be back in Mt. Angel for Oktoberfest!

The starting area of the race (Humpert Park) is very spacious, an especially nice amenity for parents. Race Northwest has been managing this race for a while now, and always does a great job with energy and logistics in their events (alongside Rogue Multi-Sport for timing). Coffee was available for $2 at the start line (money going to local non-profit), which was almost a necessity on a mild morning. Half marathon runners took off around 815am – heading north to complete a cool loop section on that edge of Mt. Angel. The 5k and 10k races were slated to begin at 10am, and at about 957am, the rain started coming.

The two shorter distances followed the same beginning 1.6 miles, a pretty simple and straight stretch South along Humpert Lane. There are some minor hills, but nothing too overwhelming. The major challenge was the rain picking up a little bit of steam and some chilly crosswinds along the beautiful surrounding farmland. My 7-year-old went through a few outfit changes along the way (mostly removing and putting on her sweatshirt) as the wind came and went. It wasn’t all that cold, but everyone was likely carrying a few extra pounds of H2O in their shoes, clothes, and hair, which made things a little slower than they likely would have been otherwise.

There was one aid station after mile 1, meaning that 5k runners got to take advantage twice along their out-and back. 10k runners headed a little further out into the country and got to circle St. Benedict’s Abbey at the top of the hill. I have run that 10k route before and really like its quiet simplicity.

The last stretch of our out-and-back put us on some neighborhood streets. As all the Oktoberfest festivities were ready to begin near 11am, these streets were mostly lined with cars already. And it seemed that the closer that we got back to the finish line, the harder the rain came down. I truly felt for those 10k and half marathon runners who still had some time out there on the course. All finishers were troopers today!

Following the event, results were available immediately and some post-race snacks were available (though mostly everyone was just trying to figure out how to stay dry). Runners could pick up their finishers mugs downtown beginning at 11, which would allow for a free beer and some indoor celebration. We opted for the “Kindergarten”, the kid’s activity area, once the weather (sorta) cleared up.

All-in-all, Oregon weather won the day, but that in no way dampened our spirits out there! I was proud of my 7-year-old finishing without stopping and enjoyed every minute of the day we spent in Mt. Angel. I feel this is one of those staple races that everyone should do once, and I have my eyes set on the half marathon in my next go around!