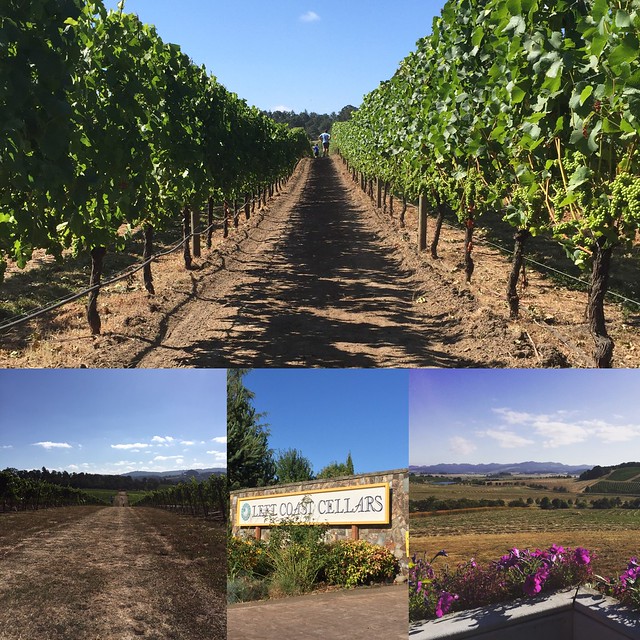 I find that inaugural events typically fall into one of two categories - providing a good experience with a few minor hiccups or trying really hard with some significant hiccups. It's HARD to plan, manage, and deliver a race. It's even harder when it is the first jump into the racing scene. I personally know that challenges going into first year races, and I am generally pretty understanding of most snafus that occur. But the 2016 Run for the Oaks came across like a well-seasoned race and I thoroughly recommend this race - even if I am still exhausted as I write this (6 hours later). Between the fine folks at Left Coast Cellars and Scovel Racing, I am also still grinning and loving to think back on this race.

Even though I reside in the Willamette Valley, I haven’t checked out as many wineries as I should have. I had seen the signs off the side of Highway 22 many times, though 99% of them are when we are on a day trip to the Coast. As we pulled off Highway 99W, I was struck with just how huge the grounds were. I don’t know what I was expecting (I mean, it had to have 5 miles of trails somewhere), but I guess I wasn’t thinking of 350 acres. It’s hard to really do justice to the grounds and the views, so I will just toss a few pictures here (which are nice – but still doesn’t really capture the awesomeness).

Again, the pictures are great – but you really have to see it to truly appreciate it. Left Coast Cellars is not one of those giant, state of the art wineries that we see littered throughout the hills. It’s still amazing, but it almost reminds me of a down-to-earth location and a comfortable place you would just want to hang out.

My 6-year-old copilot joined me (I had confirmed that it was “possible” to bring a stroller beforehand – something that proved to be my speed downfall) and we got there early to grab my bib and take in the views. We also checked out the chicken and rooster cage, Farm Market Cafe and planned our post-race activities (croquet, cornhole and stone oven pizza). Aaron from Scovel Racing had the music pumping and the atmosphere was actually really great. Couple that with blue skies, and a mild temperature (at least at the start), and everyone was all smiles.

When the 8k runners took off (5k runners started 10 minutes later), we immediately headed up a short, yet steep, paved hill. My stroller-buddy and I got up relatively quick, but made the cordial (and smart) decision to pull off and let everyone pass us, as I noticed that the first turn was on a very narrow and loose gravel path – not exactly conducive to strollers. We ended up passing some other runners over the next .50 miles of climbing, but man – I wasn’t expecting it to be so tough.

I did check out the course map and elevation chart prior to running, but it seemed deceptively level. As I mentioned, the first .5 mile was essentially a continual uphill, and then those beautiful, yet rolling, winery hills really had me huffing a puffing while pushing a kiddo/stroller up uneven grass and dirt. Sadly, this meant there were more sections of walking than I initially anticipated. Oh well.

The “steep hill” mentioned is in the center-right of this picture in the distance – the straight trail portion of the pentagon shaped outline.

There was one lone hydration stop where we received encouragement that we were “almost there”. I jokingly balked at this, and she laughed that we were about halfway. I would recommend bringing water next year, as the unshaded hills can definitely get a bit toasty. After one more rolling hill, we seemed to crest and had our first extended downhill – which was much appreciated. We could see the tasting room, but knew that it was just a mirage, as we still had a ways to go. Trails gave way to paved road after mile 3 for the first time since that few hundred feet at the start, and we got into a short-lived groove. I was feeling pretty good, but my heart quickly sank as I looked to my left and saw runners heading up a ridiculously steep hill.

Out of the goodness of her heart, my daughter decided she wouldn’t make me struggle up the hill alone, and got out and walked to the top with me – saving me from the agony of pushing 75+ total pounds straight up to mile 4. Thank her kind soul!

Luckily there was another downhill, followed by a trail section around the lake. Toss in some brief road running and a final trail climb, and the finish line couldn’t have been more welcome. I would guess that about 85-90% of the race takes place on varied trails – which is definitely a challenge.

Following the running, we stuck to our pre-race plan of pizza and land games. There were also plenty of standard post-race faire, from fruit and bars, to pretzels and chips. Oh, and wine.

I highly recommend signing up for next year (registration is already open). This year’s event was around $50 – somewhat high for a 5k/8k, but if you factor in a race shirt, logo wine glass (actually plastic, but whatever), and complimentary wine tasting, it’s actually a great deal. This year’s event was also limited in number (around 100), as the owner of Left Coast stated they wanted to make sure they didn’t bite off more than they could chew in year 1. Next year’s event looks like it will be moving to a 10k/5k as well.

It is looking like the allowed numbers will increase in 2017, and that’s a good thing for everyone. However, don’t delay in checking out Left Coast Cellars – their Tasting Room & Farm Market Cafe are both open daily from 11-5.

2 Comments on First Time’s a Charm: A Run Oregon recap of the inaugural Run for the Oaks 8k