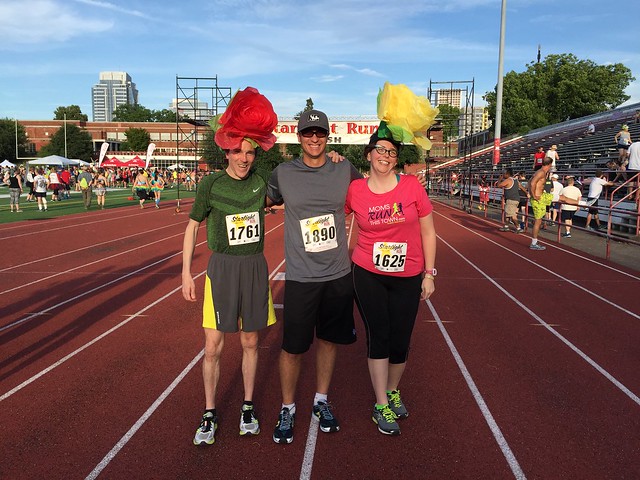 The 38th annual Starlight Run took place on Saturday, June 4. The temperature was hot, the crowds were plentiful, and three Run Oregon bloggers took to the downtown Portland streets courtesy of the event. Read on for their experience.

Matt: The Starlight Run seems to be a staple for many a runner in Portland and the surrounding areas. Rarely do you come across someone who hasn’t participated in the event at least once. It has always been one that piqued my interest and one that I knew I wanted to participate in with my family.

Though the temperatures were pushing triple digits (and seemed to hardly cool down even as the evening turned into night), our experience was very smooth and easy at Lincoln High School. From the quick bib check-in to the vendors handing out food and beverages, it all seemed really simple. We found some shade in the football stands, yet there was plenty of room to stretch out and get ready to go.

While I have run downtown Portland streets on many occasions, the added temperatures seemed to really make the hills that much more pronounced. My 6-year-old was attempting her first 5k (after successful 3k’s) but, in retrospect, the heat (coupled with a pre-race fooling of delicious Cosmos popcorn) made it too much to bear on her little body. After about a mile and a half, she was overheating and necessitated our little family (her, my wife, and running-stroller bound 4-year-old) to walking. This wasn’t all bad, as we got to experience the race for what it really is – a fun time with huge crowds cheering on runners and costumes galore.

Joe: The Starlight Run is a unique event. Unless you’re the fastest of the fast, there’s no point in racing it hard, because there are no results recorded, and only the top three overall receive awards. And if you run it as a fun run, you really should be sporting a creative costume. The crowds gathered for the Starlight Parade are very enthusiastic and show appreciation for fun costumes, and kids line up along the sidelines for high fives. This is a great event to enjoy with family and friends at a relaxed pace and soak up the atmosphere.

I’m terrible at planning costumes in time for events like this, so when fellow Run Oregon Blogger Robin showed off the elaborate rose costumes she and her husband were making and invited me to join her family, including her two young daughters in bee and ladybug costumes, for the run, I jumped at the chance. I had a great time running and walking with them, and seeing the older daughter break into a huge grin every time she sped up during her first-ever 5k was awesome!

Robin:   This crazy race is a fun, family- friendly event full of quirky and some very well thought out costumes.  Arrive early to cheer on the creative spirit at the costume contest and enjoy plenty of samples from vendor booths, live music or just kicking back with your friends.   Post race, enjoy the festivities and watch the Starlight Parade.  I admit to skipping the post race crowds and leaving immediately after the race, but my 6-year-old and 3-year-old are still convinced they were the parade.  Matt mentioned above bringing his kids and I brought mine as well, knowing they would love the crowds clapping and cheering.  I think the crowd enthusiasm may have been what fueled my 6-year-old to keep going, accomplishing her first 5k on her own two feet.  Dressed as a ladybug and a bumblebee, my kids heard plenty of “oohs” and “aahhs” as they trotted by, surrounded by adults wearing giant roses on their head.

I have to give a huge shout out to Joe for running with my family.  “Running” might have been more like “picking up knees while inching forward” but it became very clear that I was not going to be able to keep up with my oldest at the pace she was setting for herself.  Joe to the rescue, chased her through the crowds and made sure she knew someone was with her, even if her mom was stumbling behind.

Despite the early June heat that this race sometimes experiences, the crowds are always full of cheers of encouragement, high fives, and a squirt bottle or two to mist the participants.   I knew the heat would be less than ideal, so I carried a drawstring nylon bag full of water bottles for the entire distance.  I guess I was a mobile aid station!  This is a fun run and we put a lot of fun into it.  I think this will be our family’s tradition to welcome in the summer season, so if you see me there, chasing two kids, be sure to give me a “You can do it, Robin!”