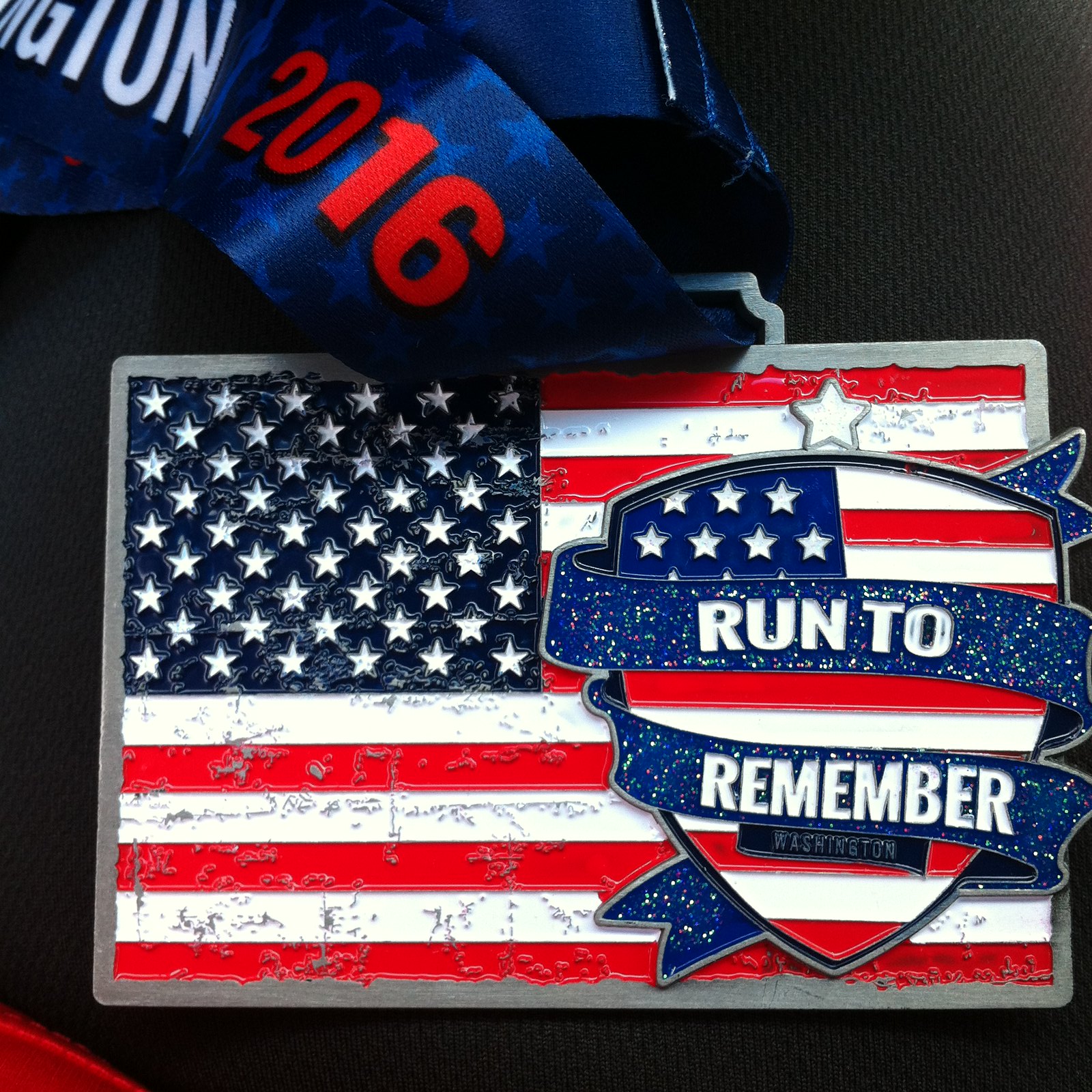 After running races in the Portland Metro area for the past six years or so, race routes are getting somewhat repetitive, so I was excited to sign up for a race in Washougal, WA. It was a clear and sunny morning nearing 60*F when over 430 runners were toeing the line for the Run to Remember 5k and 10k at Reflection Plaza in Washougal. Full results for all distances can be found here. I arrived with my family in tow about 30 minutes before start time, and we were able to park in the parking lot next to the Pendleton Woolen Mills store. After a short walk to the start area, I decided to stop by the porta-potties, since I didn't remember if there would be any on the course. And good thing I did get in line right away: With only 5 porta potties, it took about half an hour before I was done (and I realized later that there were no bathrooms on the course!), and at that point there were just seconds left before the start of the race.

The 5k and 10k started right on time at 10am. I started near the middle of the pack, and even though I didn’t hear about any announcement asking runners to line up according to pace, I didn’t notice any significant congestion on the course. The flag-lined city street at the beginning of the race course allowed for the entire width of the two-lane street, and by the time I reached the tunnel labeled “Gateway to the Columbia,” the field was already stretched out quite well. A quick switchback ramp (lined with small American Flags) got us up onto the the Columbia River Dike Trail in Captain William Clark Park along the Columbia River. This trail is very flat with a packed pea-gravel surface and beautiful views of the Columbia and (on the first half) the Vista House and Mount Hood.

The first aid station was located at Mile 1, offering water, Gatorade, and PowerGel. I was feeling great (and carrying water) so kept on going. The 5k turnaround came up soon after, and it was very well labeled as well as staffed by volunteers who reminded 5k runners to turn around and 10k to keep going. At the second aid station (just before the Mile 2 marker), I took a water and a Gatorade and kept on going on. By that time the industrial complexes were behind us, and we had entered the Steigerwald Lake National Wildlife Refuge. I watched out for wildlife, but I didn’t see any animals larger than a barn swallow (not counting the leashed German Shepherd dog).

The 10k turnaround point was also well-marked and staffed by friendly and encouraging volunteers. Since I’m training for a half marathon, I’m also training to fuel during a run, so I ate two of my chews after the half-way point. Knowing that I’m more than half way done is always encouraging, so I tried to pick up the pace heading back the way I came. The gentle breeze was blowing from the west, and it felt refreshing in my face. The second half of the run went uneventfully for me. I made it a point to be encouraging to the oncoming runners still out on their first half since I know how big of a difference a “good job!” can make to me while I’m running.

The aid stations on the return were just after the Mile 4 mark and at mile 5, and I chose Gatorade again at both. Soon I saw the end of the trail ahead, where the race photographer had positioned himself at the bottom of the downhill switchbacks, so hopefully I will look happy and light-footed in the race photos. Through the tunnel and up the street I saw the finish arch just a little ways ahead. I had enough steam left to speed up a little bit on the final stretch, finish strong, and receive my finisher’s medal.

In the finisher’s area, I found my family who had been patiently waiting and cheering on other finishers. I found myself a can of coconut water, which I love! (It looked like there was no Gatorade left by the time I had finished.) The buffet of food was quite impressive again, just like at the Why Racing Spring Classic, and included oranges, pretzel mix, bread with Nutella, build-your-own fruit/granola/yogurt parfait, french toast, and sausages. After filling my plate, I checked the results table to see if I earned an age-group award (not even close!), and then headed out to spend the rest of the day with my family in the beautiful Columbia Gorge.

Overall I would definitely recommend this race to anybody who is looking for a flat and well supported 5k or 10k . I hope that for next year they order a few more porta-potties, but aside from that, the entire event was very well done and a great experience.