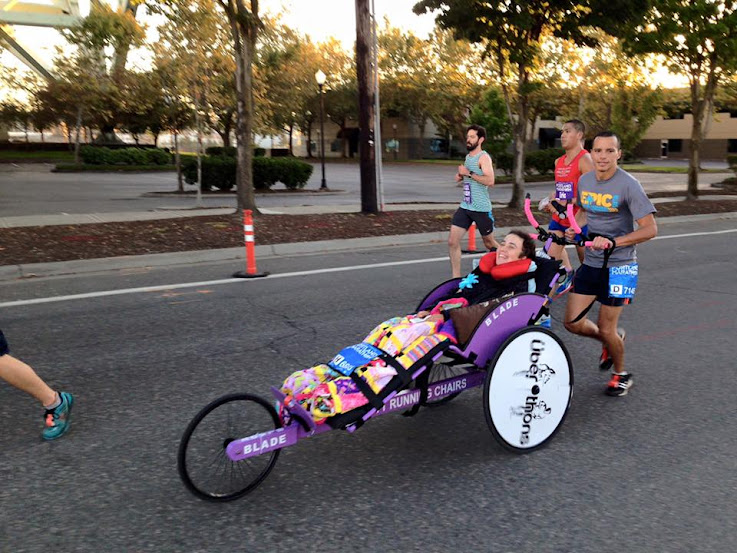 Enjoying the Portland Marathon with Andie

I started 2015 with the usual list of goals and standards. Some were meant to be achieved, others were a nigh impossible bar to strain for. In spite of a rather stressful personal life, I was able to make some new marks this year, as again running proved to be the glue that holds me together through the rocky moments of life. I toed the line 32 times, running practically everything from the mile up to the marathon. I managed to win 15, which puts me at just under a 50% win percentage. There were many notable moments, and I actually set a couple personal bests. I pulled 3 pr's within 6 weeks, two in the half marathon and one at the 5k. I ran a 1:13:00 at the Champoeg Half and then dropped another 27 seconds with a 1:12:33 at the Columbia Gorge Half a couple weeks later. On Thanksgiving I tailed two speedsters at the Turkeython to drop 27 seconds off my 5K best, set a few years ago, crossing the line in 15:33. My first attempt at 'racing' a marathon went decently, as I finished in 2:47:02 in Eugene, beating my previous best by nearly 45 minutes and setting me up for the chance to run Boston.

A good friend and local legend Chuck Coats was in a tough spot with a teammate injured just days before the 12 Bridges Relay. He reeled me in and we had an amazing adventure, trading turns to traverse 65 miles in a well run event at a ridiculous pace.

With Chuck after the relay

A set of chance circumstances put me at the starting line for the Portland Marathon, pushing a local lady, Andie Proskus, who is afflicted with MD. We had an amazing 26.2 miles together and inspired a lot of people in an event that I will never forget for the rest of my life.

A keepsake from the experience

There were a few bad moments, struggling at the Heartbreaker Half Marathon, dealing with sickness at Race for the Cure and not going to Kevin’s Cup because I fell ill. Luckily enough, I only suffered a couple minor injuries.

I met quite a few new people this year, and got to do some cool races I had not done in the past. I learned a lot about running by heart and not worrying about the clock. All of my best times were run without a watch, with literally no inclination of the pace I was at. I have found it to be more freeing, and less worrisome than being incessantly worried about pace.