This past Labor Day, I was in Sunriver for the 5th annual Sunriver Marathon for a Cause. This is the third time I have participated in these races (the 10k in 2011, double half in 2013, and the half this year), and this event is one of my favorites across the Oregon running landscape. It is big enough to be competitive, but not large enough to feel swallowed by people. It’s a great balance.

I loved every minute.

While I have stayed a few times in the numerous vacation rentals within Sunriver, this was the first year actually staying at the resort. Out lodging was a two-story town home of sorts with two queens and a bathroom upstairs, as well as a queen pull-out, bathroom, and kitchen downstairs. We stocked our mini-fridge with snacks and meals for our stay – effectively cutting out the cost of eating out all the time (though we did manage to eat at Sunriver Brewing Company – of course). It fit our family well, and was literally a 30 second from the starting line. And of course, it had this view from our balcony. 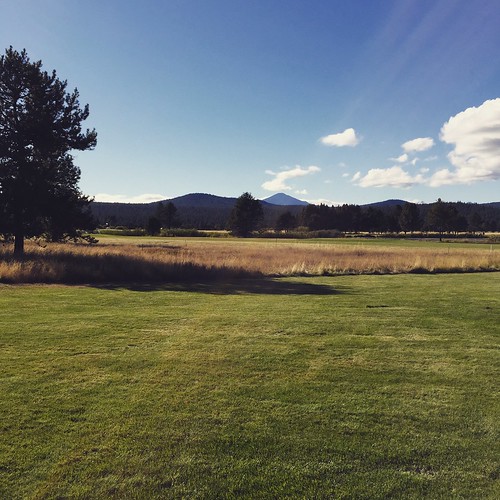 The Race: Our first race experience was the Kid’s race on Saturday morning. It was a pretty low-key event that followed the 5k. But despite its simplistic nature, it was pretty well-organized. Kid’s could select a 1/4 mile, 1/2 mile, or full mile option. My girls opted for the shortest distance and you could just see the sheer joy on their faces as they got to run down the main corridor to the main finish. They got their medals, and adorned them for the rest of the day with their cute yellow shirts. 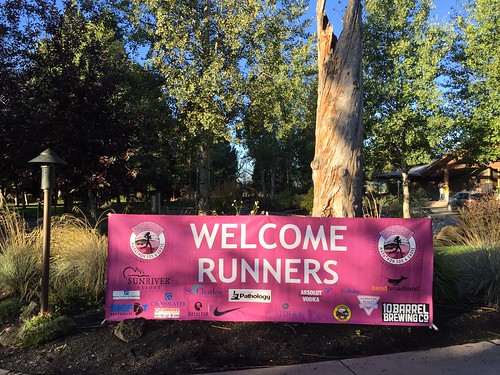 The half was held bright and early Sunday morning. Despite the frigid temperatures (30 degrees at race start), the sky was blue overhead and it was obvious that the sunrise through the race was going to contribute to a gorgeous landscape. 330 half and 110 full marathon runners crammed the lobby of the resort for the last few minutes of warmth. Marathoners took off at 715 am and us half runners shortly thereafter.

The course, like usual,  was fabulous. It is settings like these that I wish I had easy access to a camera as we ran along the waterways, golf courses, and beautiful fields. The early morning mist drifted off the grass as the earth warmed up, creating an aura of awesome. Mt. Bachelor loomed in the distance and there was one point right around mile 4 that I really just wanted to stop running and stare. It’s hard to even describe the beauty of this route. It was just perfect.

The course started to hit woods and vacation rental cabins about mile six, which meant some shade – which was not necessary, but a fun change of scenery from open golf course to wooded trails.

I could tell right off the bat that I had “vacation legs”, and I wouldn’t be putting in a groundbreaking time. I planned to take it easy, which is usually a recipe for just wishing the race would be over. However, it was amazing how the miles flew by. I found myself lost within the beauty of the area and thinking about a bunch of things, but not really about anything specific, that before I knew it, I was coming up on just a few miles left. Having ran this course once before, I knew that there were a few small-ish hills remaining that felt more challenging if you weren’t prepared for them. I conserved some energy and was able to take these on without much of an issue (for future reference – remember the hills near mile 11). I was feeling good enough that I passed some people within the last mile and made as strong a finish as I had done in a while.
The after-party consisted of receiving our medal and pint glass. That glass was quickly filled up with beer provided by 10 Barrel Brewing, and my stomach was filled with a ton of great post-race faire – from chocolate milk and bananas, to granola, pretzels, and fruit – it was a nice little smorgasboard. Results were done quickly, which was nice. There were also portable heaters in the finisher’s area which were appreciated by runners and spectators alike. This race has clearly mastered their craft and puts on an amazing race with unique experiences, great volunteers, and all the details covered.
Speaking of volunteers, they were fantastic. From those handing out water, to those blocking off streets, to those even telling us where to turn, I was always met with a smile. We also started crossing streets about mile seven and every road crossing had at least two volunteers (or police) to stop vehicles.

As I was registered in the race package, my race bag was delivered to my room. The green bag is awesome, as it is insulated to keep things cold. I also received a nice Nike running hat, a logo half-growler (awesome!) and a few energy products. That was awesome. 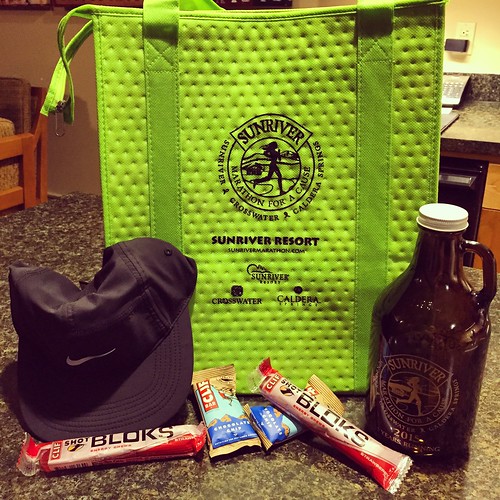 Additionally, we were able to access the new Cove Pool as part of our package. My kids swam for hours and hours throughout the weekend (while I stayed in my long pants and jacket on the outside).

Overall, this race once again surpassed my expectations. It continues to get better with each year I participate and should really be one that you participate in at least once.