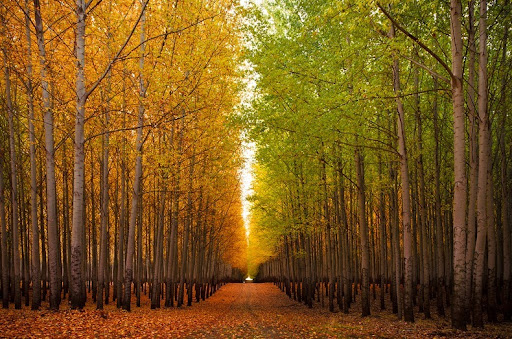 The Boardman Tree Farm, the original "That would be a great place to race!" site.

For years, on family road trips, I used to gaze out the car window at the vast acres of precisely arranged poplars on the tree farm near Boardman, watching the geometrical patterns they formed as the car whizzed past. In my youth, my parents used to accompany me to many races around the state, and we'd often agree when we passed an interesting area, that "That would be an interesting place for a race!" The Boardman tree farm was at the top of our list of theoretical ideal race venues. So it was an exciting discovery when, years later, I stumbled across an actual race among the poplars. There are a number of special places, like the tree farm, that I've always thought would be a great place for a race. Some have eventually hosted events, while others are still "virgin territory" when it comes to racing.

A view of the Bay Ocean Spit from the south.

One of my parents’ favorite areas for hiking and birdwatching was the Bay Ocean Spit near Tillamook. A dirt road heads out a narrow peninsula that separates Tillamook Bay from the Pacific Ocean. The spit widens and opens into a large area of woods, dunes, and dense undergrowth, with the road winding along the bay side.

On our many hikes on- and off-road, we would comment that “There ought to be a race here!” Several years later, a random search of online race calendars coughed up a race on that very road, including a 5K and a 10K. Appreciating the scenery of the woods, but knowing the road turned to sandy beach at the end of the spit, I kept waffling on which distance I would prefer. As it turns out, I have yet to plan a trip out to the coast to run that race, but I’m sure it would be a memorable one in a favorite location.

Steens Mountain in Eastern Oregon was another favorite camping and hiking area for my family. The mountain rises to over 9000 ft., and the dirt road from the tiny town of French Glen to the summit is 26 miles (give or take 0.2) in length (does that distance ring any bells?) I mentioned more than once to my parents that that road would make an amazing marathon course (for other people!) Uphill for the maniacs, downhill for the more sensible runners.

I’m not aware of any marathons on Steens Mountain, but the peak is host to the long-running Steens Rim Run 10K, rising from 7000 ft. to the summit, a race I couldn’t resist inflicting on myself five different times (I’m a slow learner!) Once I even got caught in a blizzard… in August! It’s a spectacular event in an amazing place, one that every Oregon runner should experience at least once.

Crater Lake is another one of Oregon’s breathtaking landmarks, and probably its most famous. We visited once when I was very young, and I didn’t get back until years later, but any runner would agree that running around the rim road would be a spectacular experience. Luckily for us, the Linkville Lopers running club and the National Park Service have been able to host The Crater Lake Rim Runs there every August for the past 39 years.

There’s a marathon, a 13-miler, and a 6.7 mile race. I have run the 6.7-miler nine times (and the 13-miler and marathon a combined zero times – I’m not that crazy!) Coming one week after the Steens Rim Run, I was able to do the double one year, turning the two races into a week-long Southern Oregon race tour. There ought to be a race at Crater Lake… and there is!

Cape Lookout juts into the Pacific just north of the beach. Most of the trail is in the woods away from the cliffs.

One of my all-time favorite trails is the one that heads out to the end of Cape Lookout, with views straight down into the Pacific. At the right time, in the right season, you may be able to spot whales frolicking in the water during their migration up or down the coast. I remember one particular summer hike with my mother when the temperature was just about perfect. Not too cool, not too hot, with just the right amount of breeze.

The sky and the water were both a perfect shade of blue, and yes, it would have been a perfect day and trail for a race (although in some spots the steep cliffs and narrow path would require some very careful footwork). So far, I have not heard of any races on the trail itself, although the new Three Capes Relay passes close by on the main highway.

A bend in the road in Titus Canyon in Death Valley.

A little farther afield, Death Valley National Monument (now National Park) in California was another favorite vacation destination for my parents. There’s a side ravine on the east edge of the park called Titus Canyon that you can drive down, though four-wheel-drive vehicles are required. The canyon is roughly 14 miles long, and drops from 5000 ft. to sea level. My parents took me down that road once as a kid, and later I got to drive them down the narrow, cliff-walled gravel road myself.

As we passed through the old abandoned mining town at the head of the canyon and marveled at the multi-colored, water-shaped stone walls and the amazing patterns of light and shadow, we agreed that (wait for it) “This would be an amazing place for a race!”

Of all the places on this list, Titus Canyon seemed like the longest shot to host a race, but to our great surprise and excitement a couple years later I came across a listing in a running magazine for a marathon and 30K that took runners through the canyon. I wasted no time in signing up for the 30K (Again: Marathon? I think not!) Note: The sadistic race directors have apparently replaced the 30K with a out-and-back half marathon, UP the canyon for the first 6.55 miles. Brutal!

It made for a hugely memorable road trip and race, and although the first four-plus miles included some brutal uphill (I admit, I power-walked some of it – OK, scratch the “power” part), the final 14-mile jaunt through the canyon was probably my favorite and most indelible running experience of all time. It was indeed “A great place for a race!”

What special places have you thought would be “A great place for a race”?