A few years into running I decided that since I was (apparently) never going to get any faster, I might as well confront myself with more challenging courses to soothe the burnt bits of my ego that had, at one point, hoped for a sub-2:00 half marathon finish. I started running what I called the Slingshot (Lower MacLeay trail up to Pittock Mansion in Forest Park) once a week, and I signed up for half marathons while ignoring faster friends' war stories of how "brutal" a particular course was. It didn't matter if I was the second to last person out on a "brutal" course, I was still finishing ahead of everyone who'd been too scared to show up that day.

After trying my hand at some of the more difficult half marathons in Oregon (by their own claim or community mythos) including the original (2011) Heartbreak Half, the annually-changing Fueled by Fine Wine Half Marathon, the notorious Crater Lake Rim Run, and more recently the Columbia Gorge Half Marathon, I thought I’d sign up for a race who had no qualms about being frank about the difficulty and nasty weather variable of their race in the title itself– the Hell of the Northwest.

Lead blogger/Run Oregon Content Manager was also thinking of running it, and warned me that– you guessed it– it was going to be “br00tal.” That’s fine. I signed up without looking at the elevation chart, because as they say to kids these days, “you get what you get and you don’t throw a fit.” No elevation chart had ever dissuaded me from signing up for or running a race– at this point in my life, I knew I would eventually make it to the finish line even if a sag wagon had to bump my butt up the side of a mountain.

Then the ice came. It was Thursday, November 13th in Portland. Two other Run Oregon bloggers messaged me. Are you still going to do it, they asked? If I could make the two hour drive from Portland, yes, I reassured them. I’d be there rain or shine. Later that day, I was emailed and texted by the race director that the race was cancelled for the weekend and rescheduled for the following Saturday– ice and downed trees had made the roads to the race impassable, and the race director couldn’t judge the condition or safety of the trails if he couldn’t get to the starting line. 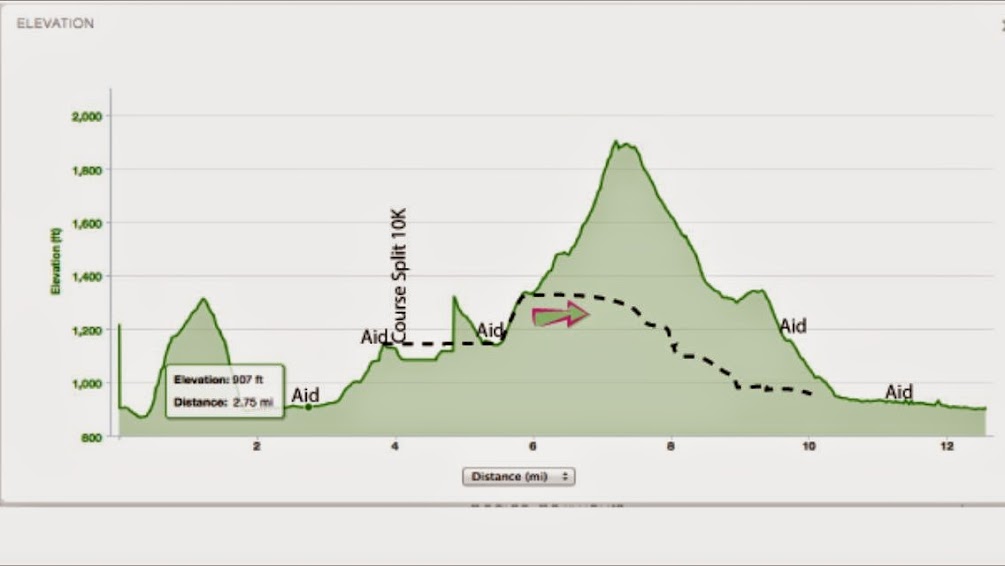 The elevation chart for the 2014 Hell of the Northwest Half Marathon and 10k.

At this point, I have to brag on the race director a bit. Last year, ice famously shut down a huge number of high end, expensive races in the mid-South, and almost all the races uniformly refused to give the racers a refund in any format– whether by a full refund, a transfer of registration to the following year, or a discount on a future race. The race director of the teeny tiny Hell of the Northwest Half and 10k offered racers their choice of refund– refund for out-of-state persons who couldn’t make it the following weekend, a transferred race entry to a future race of your choice if you were in state, or you could still show up the next Saturday if that day was convenient for you. What a stand up guy. I considered trading my Hell entry in for a spot at Mary’s Peak 50k in June 2015 when the weather would be better, but then I realized the obvious– I could just do both.

The next Saturday morning, I left my house at 7 AM so I could arrive at the race in time to pick up my packet before the 10 AM start time (late start was a big plus considering the drive time to the area and the .5 mile walk from parking to the start line). Thirty minutes after we left Portland, it started to rain. And rain. And then it RAINED– i.e., driving 40 mph on the highway kind of rain. The kind of rain that makes you wonder if you should have three-inch spikes on the bottom of your shoes to make it through a race. The kind of rain that has you studying an elevation chart like a new convert reading their holy book for the very first time. The first climb looked rough enough– going from 900 feet to 1300 feet in one mile? I’d done that exact same gain in the same distance at the same portion of a race before, but it was a road race– of all things, the Mustache Dache outside Big Al’s Bowling in Beaverton, Oregon. But at Mustache, I had the benefit of a dry road versus what would here in the Coastal Range be a fully wrecked, slip-and-slide trail. The drop after you peaked mirrored the original gain– I wasn’t sure which was more terrifying. 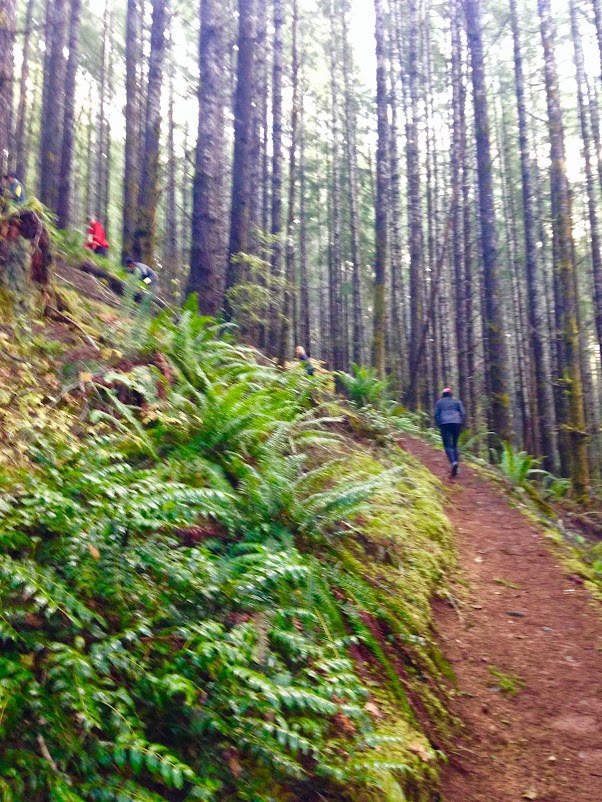 Zig zag portion of the initial climb at the 2014 Hell of the Northwest. Apologies for the blurriness– I was in the process of falling down when I took the photo.

It’s hard to show something like this in pictures, but if you look above, you’ll see that the guy behind the woman in the red shirt is basically crawling up the hill on his hands and knees. That was all of us at some point or another on Saturday, November 22, 2014 at the Hell of the Northwest. That climb and the third– which on the elevation chart appears to be either a vertical free-climb or a mining operation depending on whether you’re on the half marathon or dotted-line 10k route– is part of why on race day, I ultimately dropped down to the 10k. I’m not afraid of going up, but what goes up must come down and the idea of crashing from 1900 feet to 900 feet from miles 7 to 13.1 on a 100% organic slip-and-slide without a mouth guard and a few thousand dollars worth of recent dental work was entirely too daunting.

Overall, the race was gorgeous, but as you know “scenic” and “gorgeous” are usually code for difficult races. As we entered one drop portion of the race, a yellow skull and cross bones marked the entry to the trail. Appropriate– maybe too much so. After my first couple slips and falls navigating both up and down, my legs were shaking violently. I kept letting other runners pass me, hoping I could gain confidence from watching where their feet had successfully fallen and letting my tracks match theirs. I found a couple girls who’d driven in from Newport and matched their pace. One woman cheerfully asked me if this was my first race. This was originally scheduled to be my 10th half marathon just this year, but instead I just shrugged and said no– this wasn’t my first rodeo.

Then the rivers came. 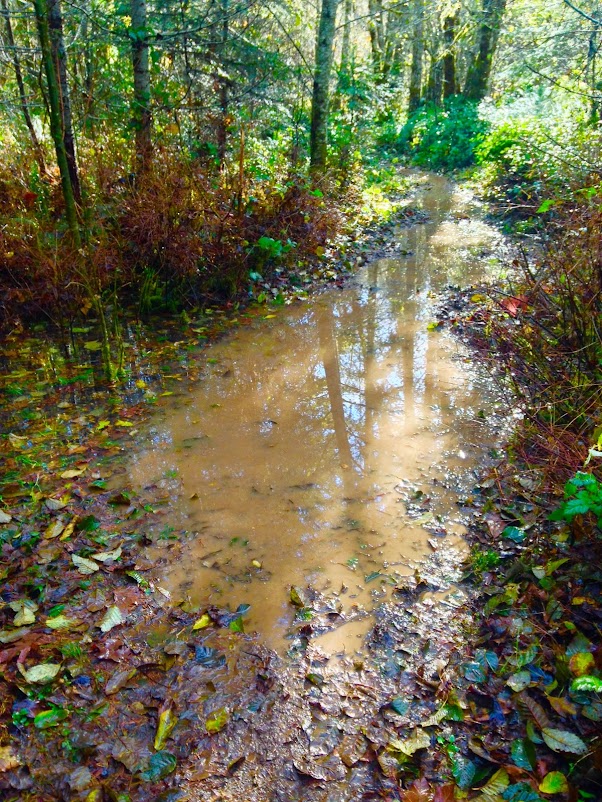 In true Oregon Trail fashion, time to ford the river.

In the 90s computer game, Oregon Trail, I always died when it came time to ford the river. I just never got that talent down. The above picture hardly does the ponding on this trail system justice. On the 10k route, there were about a dozen ponding features to truck through, with water and mud sucking your feet up above your ankle bones and no route to run around them– it’s through the ponds or go home. Ultimately though, like most difficult races, this was a good confidence building exercise because it turns out that completely soaking wet shoes aren’t as impossible an obstacle as you would think in terms of temperature or friction. Of course, let’s be fair– I was only running half the distance of the half marathoners, and I’m sure a full marathon on this course would require multiple sock changes over the miles to avoid serious damage.

Just as I was embracing the pond runs and getting into my stride, I stumbled and heard a loud snap in my right ankle. SHIT. “You ok?” one of the Newport ladies called back to me. “Great!” I hollered back. “Just gonna walk this off.” She shrugged and took a big pull off her asthma inhaler. Great. Really, I thought. Some lady having an asthma attack was going to kick my ass on this course. I limped along until the ankle started to feel better– turns out, it was my knee and groin that was going to feel that fall. At least it was gorgeous out here. My run had turned into a wonky, solo hike– and then I heard the music blasting through the woods. What? The finish line? Here? Already? I scuttled along over a series of wooden bridges and was greeting at the finish line by one cheering husband, a killer, steaming bratwurst, and a Ninkasi beer. The RD even let my patient spouse– who waited in the cold almost 20 minutes longer than I had promised– skip the non-runner guest meal fee because there was so much extra food from the race being delayed from the weekend before. Very cool, Mr. RD.

Overall, it was a race I would run again myself (in better weather– I want a re-do) and recommend to a friend, especially for the $35 HM price point. While there aren’t any medals and the tech tees cost extra, the post-race meal was generous and the atmosphere was beautiful and friendly– the kind of camaraderie unique to a small, difficult race. Results available HERE, and here’s a gallery of the rest of the race: 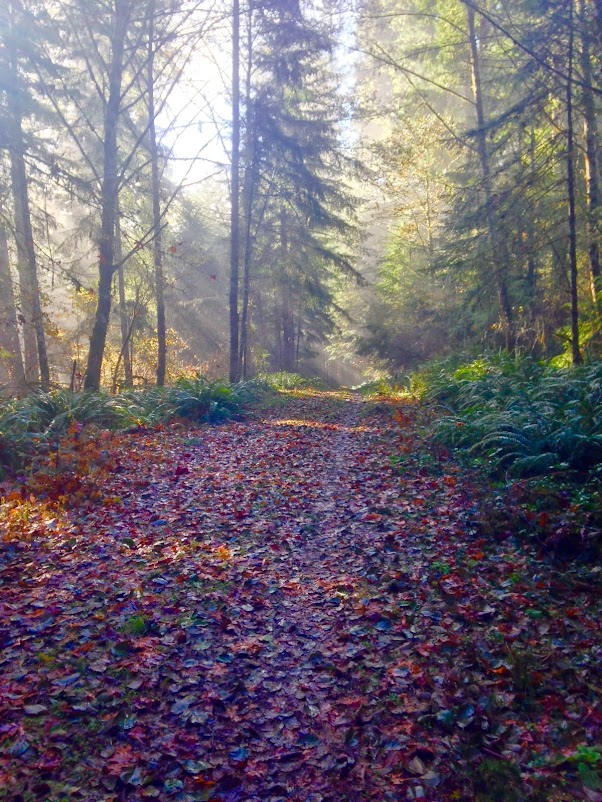 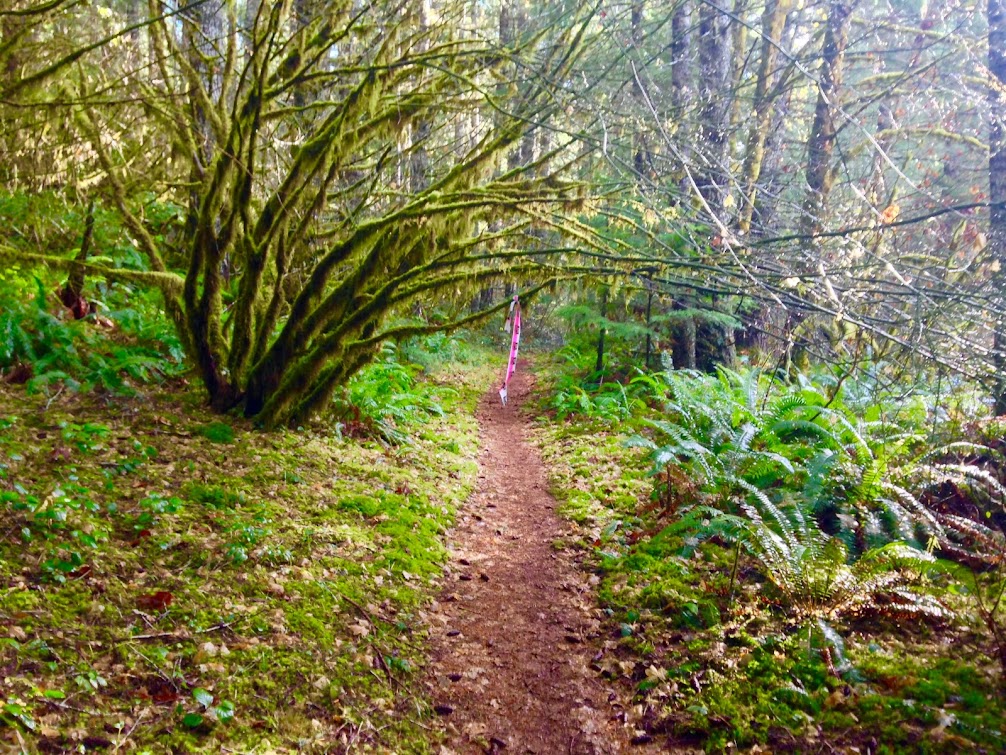 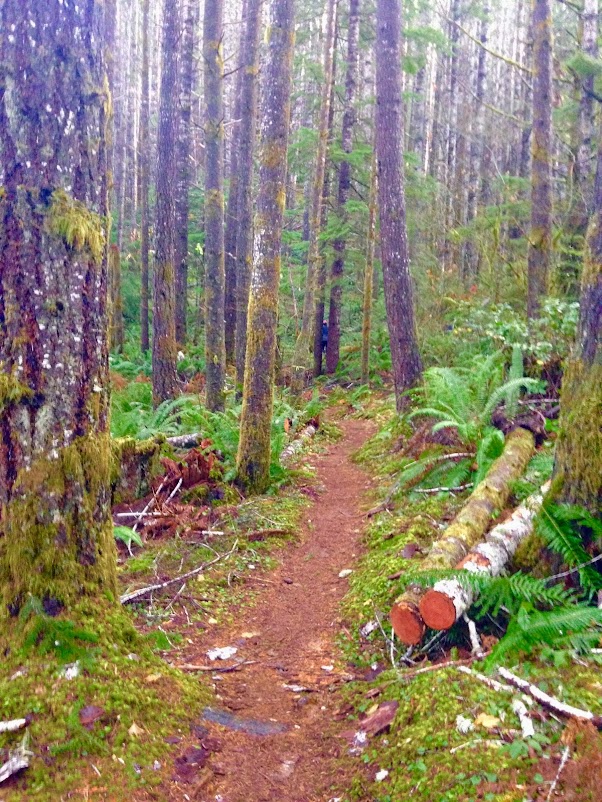 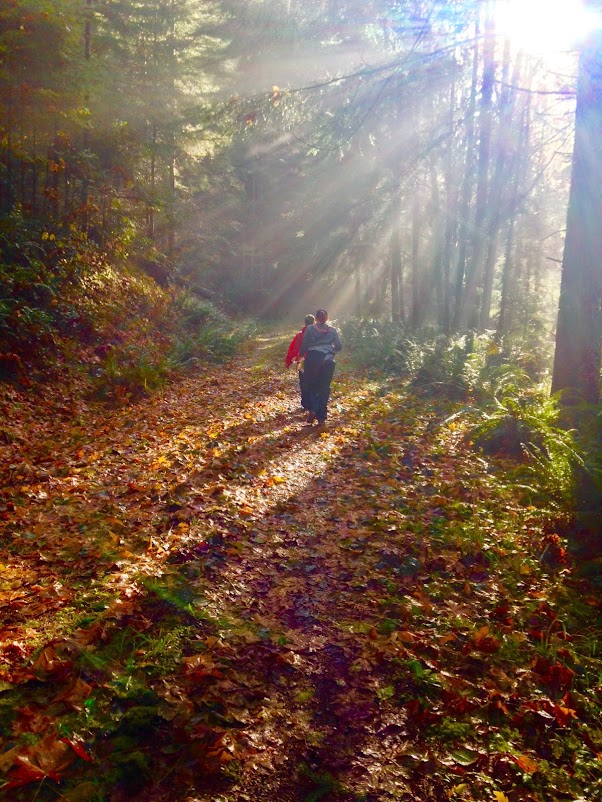