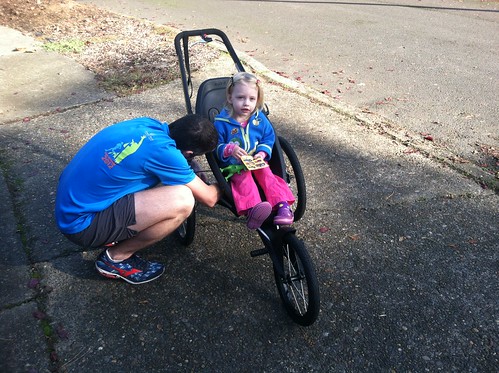 Check out the initial post of the Phil & Ted's Sub-4 Stroller here. After my initial run with the Sub 4 stroller, I knew I had a great stroller. However, there were also a few adjustments that needed to be made. One adjustment was simple - I simply needed to turn the front wheel around and it stopped pulling to the right. The second adjustment took a little research and caused a few headaches. The issue was that the disk breaks were rubbing and creating an annoying squeak as I ran and the rubbing also made it just a little harder to push the stroller (I'm guessing this has something to do with friction or whatever). Anyway, I attacked the stroller with an allen wrench from the comfort of my house. It took about 15 minutes of adjusting a couple of screws before I got it to a point that nothing was rubbing.

I was finally ready to strap my daughter in and head out for a run. One thing I never considered is that I made the brake adjustments to an empty stroller and when I threw a 26 lb 2 oz (seriously, she weighed 26.2 at the last doctor’s visit) toddler in the seat, it moved things just enough so that the brakes were rubbing again. So now, with my daughter strapped in, I made a few more adjustments and when I could run a few steps without a squeak, we were finally ready to head out on our run.

We started our run with a half mile on streets and sidewalks before connecting to the Fanno Creek trail. On the way out, things were going good. The kid was still in high spirits and my legs felt good. When I reached the turn around point, my instinct was to turn around and head back, but I realized that I really haven’t tested the stroller on any hills. So, I turned onto a side street and started heading uphill. For anyone who’s ever pushed a jogging stroller up hill, you’ll understand that this can be worse than hitting the 20 mile marathon wall. You’re already running slower with a stroller and expending more energy than you’re used to. Then you head up a hill and it seems like you stop in your tracks. You check the wheels to make sure your kid didn’t put something in the spokes and then you just realize that hills suck, you cry a little bit and then finally start walking until you reach the top so you can run again. Anyway, I was thrilled to find that none of these feelings of homicidal rage and massive depression set in while pushing this stroller. While my hill of choice wasn’t the final mile of the Mt. Ashland Hillclimb, it was still a good incline and the stroller handled it like a champ.

The rest of the run was pretty uneventful until we got a few blocks from home. I hit a rough patch in the sidewalk and my daughter’s head banged against the back of the stroller. One thing you’ll find with this stroller is that it doesn’t have a lot of padding for your little one. I’m thinking on my next run I’ll provide her a small pillow to add some padding. Maybe this will keep the waterworks at bay.