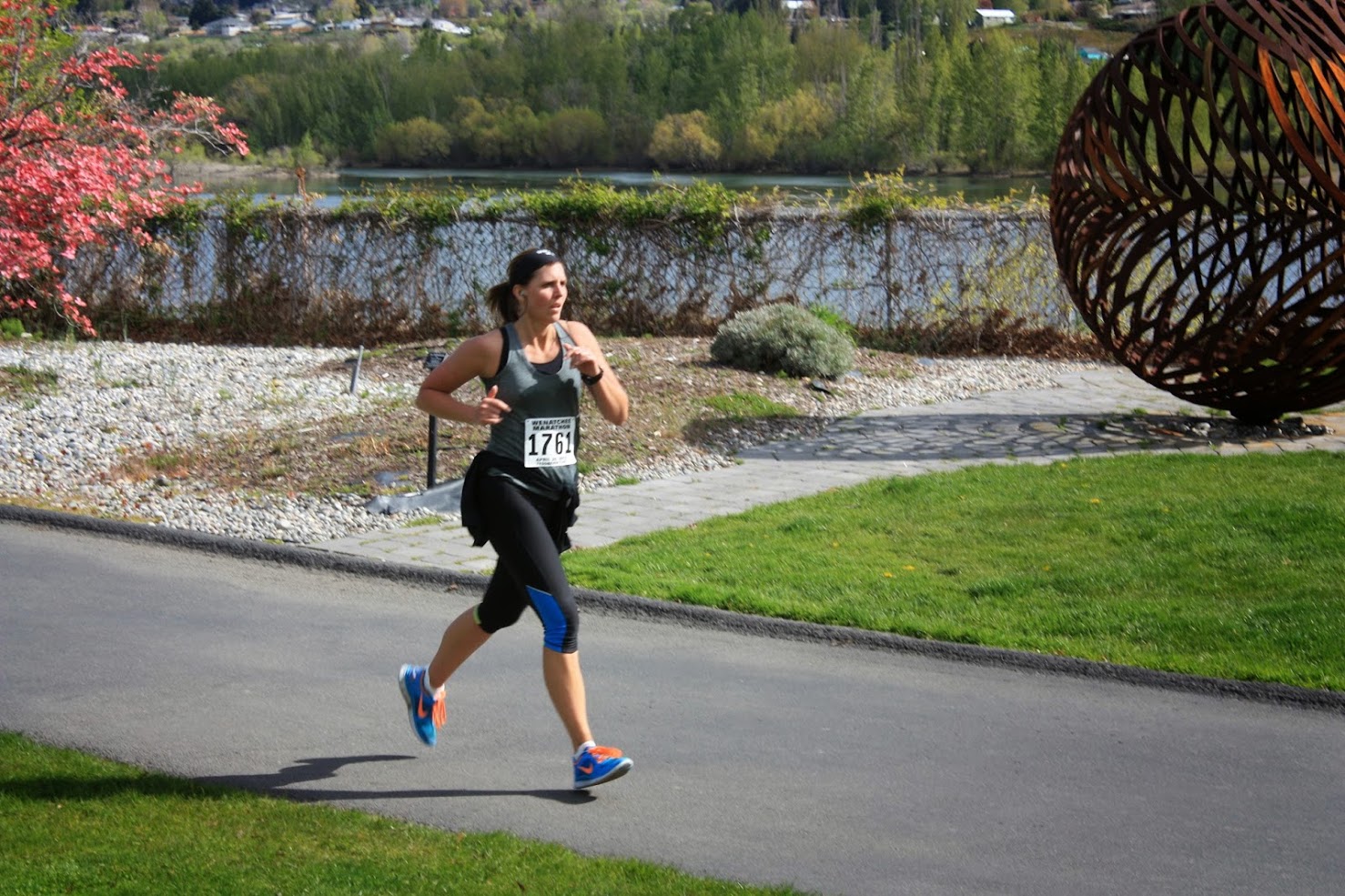 Running the Wenatchee Half in 2013

I tried running periodically throughout my youth and adulthood.  It never took.  After running a block or so, I usually ended up panting and feeling like death was imminent, so I would stop to catch my breath and think, "I can't run!"  And that would be the end of my attempt at running for awhile.

As I began inching towards the age of 30, I caught the running urge again.  This time was different. Every time I saw a runner I noticed their lean, muscular legs and I began to yearn for “runner’s legs.” So began my quest for those legs.  This time I enlisted the help of my husband and we headed to the high school track, which was just a short walk away.  We decided to start with getting in a mile on the track.  I would run as far as I could and then walk and then run again repeating that until I finished the mile.  This became our regular evening activity and it wasn’t long before my husband was running the entire mile.  I still struggled.  I expressed my frustration with my progress to him and he said simply, “Just run slower.”  Suddenly a light bulb turned on for me. For some reason I had thought running had to be all out.  Strangely, slowing down had never occurred to me.  I employed this amazing new technique and found that I could, in fact, run farther. What a concept!

My husband also suggested I get some running shoes.  Yes, long ago, I didn’t even own a pair of running shoes.  I think I was running in the old school tennis shoes I used for playing volleyball. My first reaction to his suggestion was that I didn’t need running shoes.  How could shoes make a difference?  Running shoes were just a marketing ploy to get people to buy more shoes.  Despite my hesitation, I decided that I would ask him to get me some running shoes for my upcoming birthday.  This was the big one.  I was turning 30.  Running shoes seemed like an appropriate gift.

A few days later, I donned my birthday shoes and headed over to the track for my first run as a 30-year-old.  The combination of the amazing lighter running shoes and adjusting my pace led to my first mile run. I was elated.  Running shoes rock!  And so began my running addiction (and perhaps my running shoe addiction!)  Soon a mile just wasn’t enough.  I was bored to death with the track by then and my husband had lost interest in the whole running thing, so I headed out to the streets on my own.  I ran my longest run ever.  I had no idea how far it was, so I immediately got in my car and drove the route I had just run. 2 whole miles! That was freaking amazing!  And so it continued.

With the encouragement of a friend, I registered for my first 5K race.  It was hard, but it felt like such an amazing accomplishment.  Then I tried an 8K and eventually a 10K.  I was hooked. I created a spreadsheet for all my races (which I still use today) and began tracking my times and focusing on PR’s. This running stuff is awesome!

Next came the relays.  A running group that I hardly knew recruited me to take the place of an injured runner and I ran my first Hood to Coast.  Suddenly I was a part of something bigger.  I had a running group.  We ran every Saturday rain or shine (and we still do.)  I had become a “real runner.”