Traveling to central Washington every April to run at the Wenatchee Marathon has become a tradition for me.  I usually run the half marathon, but this year due to a series of unfortunate events in March, I had to change my registration to the 10K.  At first I was pretty bummed to have to make the change, but by race day I was looking forward to running a "new" race and curious what the difference (besides the distance) would be. 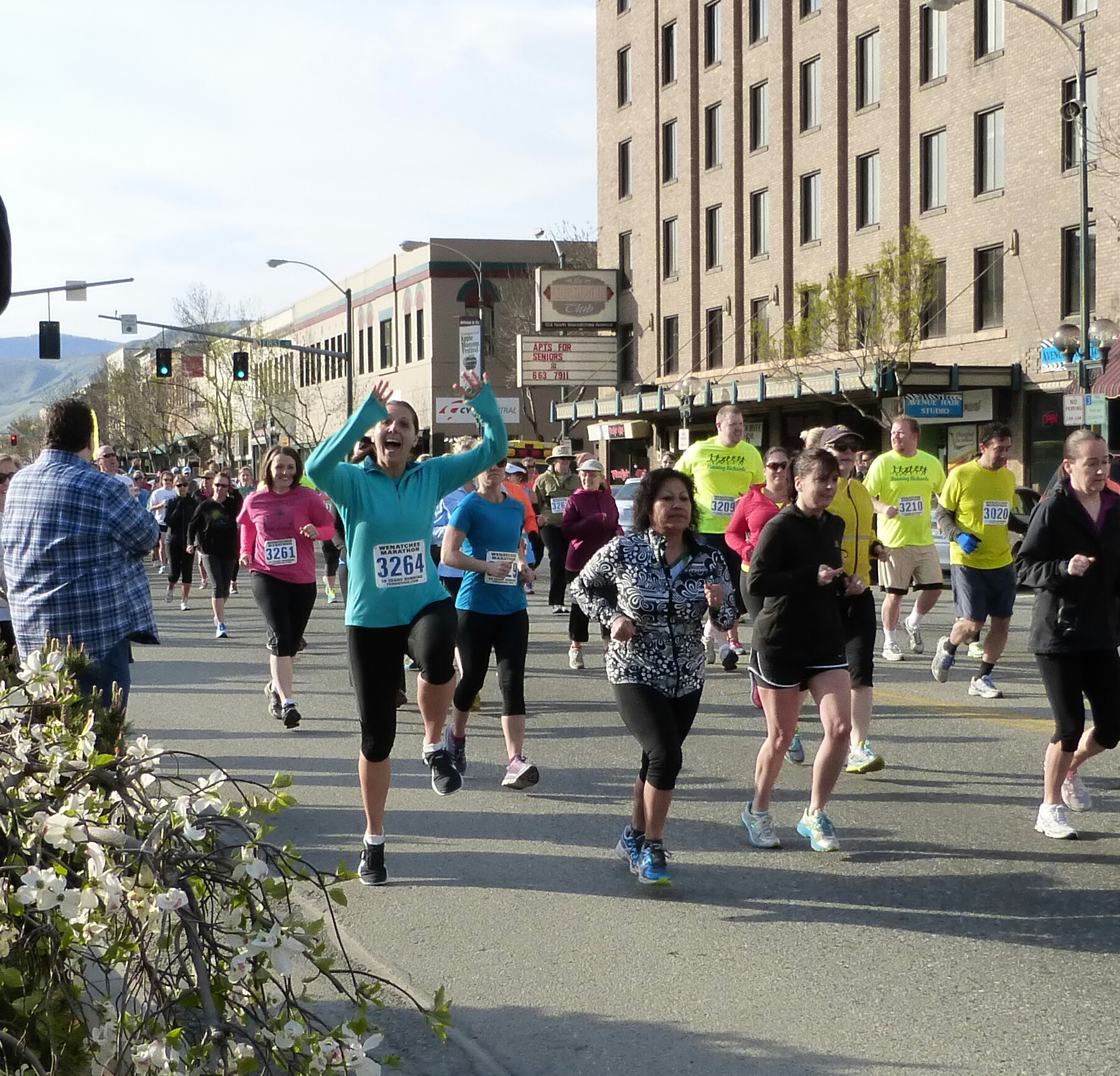 This blogger's enthusiastic start at the Wenatchee Marathon 10K!

On race morning I checked the local temperature to find that it was just 37 degrees.  I decided to pass on the shorts and wear the running capris I had brought instead.  It was a cold pre-race wait, but that did make me less impatient when I waited in line for the warm indoor bathrooms at the Performing Arts Plaza.  I was back outside in time to hear the starting gun of the half-marathon.  I had a moment of feeling a little nostalgic and sad that I wasn’t running the half this year, but I was also glad to have a more leisurely feel to the start of my race day.  I was much more relaxed knowing I was just running 6 miles and I didn’t have to stress pre-race about my gear, food, etc.

The 10K and the full marathon started together 15 minutes after the half-marathon.  I lined up in the street with the many other runners and walkers feeling lighter than usual without being loaded down with gels, headphones, and everything else I usually carry for a half marathon. The starting gun went off and we ran down the street making our way towards Riverfront Park to run along the Columbia River.  This scenic route is one of my favorite places to run.  About a  half-mile into my run I noticed the music, that I initially thought was coming from the starting area, was still following along behind me.  I turned around to see a guy with bunny ears carrying a boom box on his shoulder.  As he and his friends came alongside me, I noticed the group had a sign reading, “Party Pace” and they were carrying Easter baskets with candy in them.  The 10K was already feeling a little more festive than the half marathon. I enjoyed running with their music and fun-loving attitudes nearby, but sadly, the “Party Pace” soon became a faster pace than I was going, so the music soon faded.

The Party Pace Crew at the Wenatchee Marathon 10K

The rest of my run was rather quiet.  The route was the same as the half marathon route, I just got to turn around a lot sooner.  Running across a footbridge, I overheard someone mention how pretty the view was.  That’s when I realized I had been so focused on my run that I had forgotten to take in the great views around me.  I tried to do so, but I really wanted to run a strong 10K, so I have to admit I didn’t focus on the views for long.  I had started out this race just enjoying the run and without any expectations, but somewhere along the way things had changed.  I was checking my pace at each mile and adjusting it as needed. Around mile 5 I had officially set my time goal.

Runners making their way towards the finish along the Columbia River.

As I got into the last mile I thought about how that last stretch is always so tough when I’m running the half and how the pedestrian bridge to the finish line is so brutally hard.  I figured since I was only running a 10K, it would be much easier.  Boy, was I wrong!  I ran the last mile hard, and it seemed just as challenging as usual.  I turned the corner and headed up the bridge and, as usual, it sucked the life out of me.  That bridge is deceptively steep!  It took everything I had not to slow down and I was quite sure I was going to puke.  But, once I got to the top and started running downhill to the finish line I recovered and cruised down the bridge to the finish line and made my goal!

Runners making their way down the pedestrian bridge to the finish line.

As I cooled down post-run I started thinking that maybe I would run the 10K again next year. Or should I run the half?  That remains to be decided, but I will definitely continue my tradition of  running at the Wenatchee Marathon.  And perhaps climbing that bridge to the finish will be easier next year.

Annette Vaughan is a runner and personal trainer in Canby, Oregon. She began running at the age of 30 and became hooked after her first race (even though she is a self-proclaimed slow runner.) She enjoys small local races from 5Ks to half-marathons, with a 30K on the books as her longest run ever. She has also become a huge fan of obstacle course races and just can't get enough of them. Annette is a certified personal trainer, who believes in promoting movement since our bodies were designed to move. The more we move, the better we move and function in everyday life.
View more