The following represents the writing and opinions of Joe Dudman, and does not necessarily reflect those of Run Oregon in general.

With the Eugene Marathon taking place this past weekend, Hayward Field was inevitably on runners’ minds. Unfortunately, with the large-scale renovations and expansion in progress at the iconic track and field stadium, the Eugene Marathon events did not finish on the track this year, but rather at the 50 yard line of Autzen Stadium. While the jury’s still out on public acceptance of the new and improved Hayward Field, there’s no doubt that the old version represents very fond memories to many in the athletics community.

A view of the old Hayward Field that inspired the shirt

With this is mind, a company called Track Valley has introduced one of the coolest T-shirts I’ve seen in awhile, one with a simple graphic of the grandstand and a sweeping curve of the track, along with the words “The Original Hayward Field, Eugene Oregon, 1921 2018”. In addition to this classic shirt, Track Valley also offers a variety of track and field and trail running related T-shirts, tank tops, hoodies, sweatshirts, hats, and bags. Almost every track and field event is represented in interesting and unique custom graphics. But for me, the Hayward Field shirt is hard to beat! One of the reasons I like the shirt so much is because it evokes my own favorite personal memories of Hayward Field, both as an athlete and as a spectator.

My most memorable visit to Hayward Field came in 2003, when I ran three events over four days during the USA Track and Field National Masters Outdoor Championships. When I saw that this annual event would be held in Eugene, I jumped (not high or long, just figuratively) at the chance to race on the hallowed surface of the Hayward Field track. I was 39 at the time, at the upper end of the 35-39 age-group, and my A+ goal was simply to win one age-group medal, and even that seemed like a long-shot with all the great talent that I knew would be descending upon “Tracktown USA” for the championships.

My first event was the 5000 meters on Thursday, and I was fresh and excited. I managed a solid time and held on for third place, thrilled to have secured a coveted medal in my first attempt. Now I could relax a bit, and enjoy my next races without the pressure to reach the podium.

My next event was the 10,000 meters on Saturday, a daunting 25-lap test of speed and stamina that I had avoided ever since running my first track 10000 as a college freshman 20 years earlier. This time the field consisted of competitors from several different age groups, and all the runners wore their age on their backs to help us identify our direct competition. I eased into the race, determined to not go out too fast, while also making mental notes of those in my age group. At one point somewhere in the second half of the race I determined two things: 1. I was currently second in my age group, and first place was right in front of me. 2. I could run faster.

I combined those two thoughts and surged to the age-group lead, continuing to push the pace for the rest of the race, until I found myself crossing the finish line exhausted, surprised, and elated, having won a national age-group championship and a gold medal! The fact that the champions in the age-groups directly above and below mine both ran substantially faster times did little to dim my sense of accomplishment.

Now, I could really relax! I ran my last race on Sunday, the 1500 meters, on dead legs. I finished a distant 8th in my age group, but it didn’t matter. I had more than accomplished my goals, and this race was like a victory lap (well, 3 and 3/4 victory laps). In later years, I ran many more races at Hayward Field, at the Hayward Classic masters meets, as well as masters races at the Pepsi Invitational and Oregon Twilight college meets. Those were fantastic experiences too, but nothing will ever fully compare to winning a national championship on that historic track.

Spectating at Hayward Field is almost as much fun as competing, with the world class athletes on display, and the noisy, highly knowledgable, capacity crowds that fill the stands. While I wasn’t lucky enough to have witnessed Steve Prefontaine race at Hayward Field, I have carpooled to Eugene with members of my running club a couple times for the Prefontaine Classic, the amazing annual meet that features elite athletes from around the country and the world, as well as up-and-coming high school and college competitors.

I remember both torrential rain and intense sunshine depending on the year, but my most vivid memory of a race was Maria Mutola’s victory in the 800 meters in 2008, the final year of her career, capped off with an incredibly powerful kick down the home stretch. A native of Mozambique, Mutola lived in Springfield, Oregon as a young athlete, and became a huge favorite of the Hayward Field and Eugene track fans over the years as she came to dominate the 800. Watching her joyful reaction to her career capping win and the crowd’s affection for her was a highlight of my Hayward Field memories. 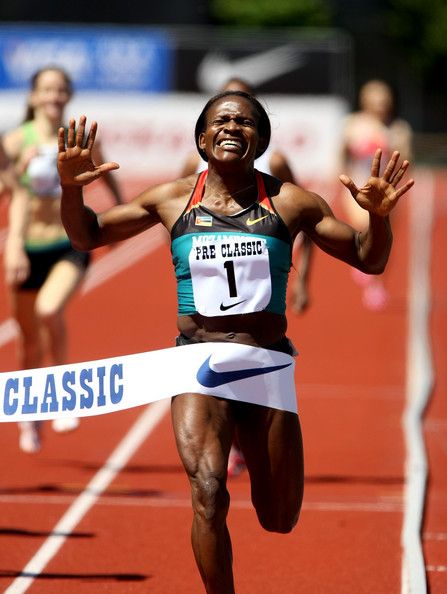 Maria Mutola winning the 800 meters at the Prefontaine Classic

Another top memory also came in 2008, while Kelly Barten and I were blogging for Run Oregon at the USA Olympic Track and Field Trials. And it also involved the 800 meters. A stacked field took off, with all the expected jostling and exchanging of positions for most of two laps. Then the crowd began to roar as local hero Nick Symmonds, from Willamette University and the Oregon Track Club, began his patented surge from the back of the pack, pulling into the lead and widening the gap down the home stretch for a dominating win.

Andrew Wheating reacts in joy and amazement, Nick Symmonds celebrates, and Christian Smith dives at the finish of the 2008 Olympic Trials 800 meters final

Meanwhile, the chase pack was a whirl of arms and legs as everyone gave it all they had left in a desperate attempt to finish in the top three and earn a trip to the Olympics. University of Oregon runner Andrew Wheating edged across the finish in second, and the Oregon Track Club’s Christian Smith dived at the line to clinch the third spot on the podium. The crowd erupted at the result, which would become known as the “Oregon Sweep”. The result was like a mutual gift between the three athletes, who presented the crowd with a thrilling exhibition of talent and determination, and the Oregon track fans, who returned the favor with a deafening expression of appreciation for the local favorites. I have a great souvenir of that race, a print of the finish line photo that Kelly got for me.

My medals, that photo, and now this Track Valley shirt are tangible mementos from a historic landmark that still lives on in a new form but will never be quite the same.

The Hayward Field Shirt is available on the Track Valley website for $25.99