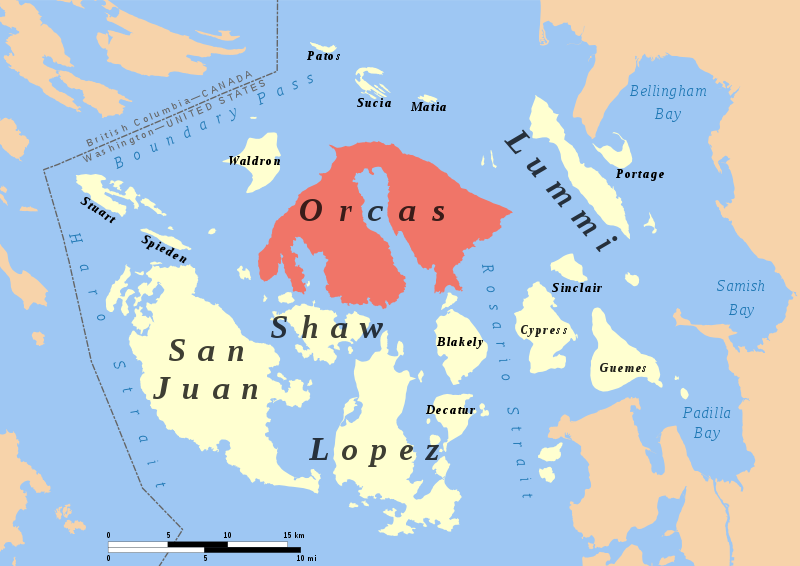 Orcas Island is part of the San Juan islands in Washington state, right smack between the mainland and Vancouver Island, British Columbia. It’s a neat little place that offers a chance to get away from it all and to enjoy some natural scenery. Although it’s a great place to see orcas, that’s not how it got its name.

Getting there requires taking a ferry from Anacortes, Washington (unless you decide to take a private plane). The ferry ride isn’t cheap (~$40 for a vehicle, plus ~$13 per adult), but you only pay to get to Orcas; the return is “free.”

My wife and I recently got to spend a couple of nights there (on our own dime, not a comped stay). Right at the start, I’ll note that it’s not the best place for pure running, although your mileage may vary depending on where you stay. We were in Deer Harbor, which is on the western side of the island. The road is narrow and winding, with no sidewalks and no real bike path either. I asked the front desk manager if it was safe to run outside, and his response was, “If you like playing Frogger.” (I ended up using the timeshare gym.) The most developed part of the island, Eastsound, is a charming little town, and running within there would be safer, though it would require many loops to get in a satisfying amount of mileage. There is also Moran State Park, which is probably the best bet, but unless you’re camping there or staying at the nearby Rosario Resort & Spa, you’d have to drive there.

Even without outdoor running, it’s a fun place to visit. Moran Park offers hiking, cycling, or simply driving to the top of Mount Constitution, the highest part of the island. At the top there’s a stone watchtower open to visitors: climb all the way to the third level for a fantastic view.

Well, it would have been a fantastic view if it weren’t for the haze in the air, courtesy of a big fire in British Columbia – the same one that was polluting the air in Portland this summer. In the picture above, the map shows what you can see, including Victoria (B.C.) to the very left. Except the air looked like something horrible from Los Angeles, or maybe Beijing.

The Rosario Resort & Spa is also worth checking out. It’s located in what used to be the humungous mansion owned by Robert Moran, shipbuilder and mayor of Seattle. The resort includes a museum open to the public: you can see the actual bedrooms of Moran and his wife, his library, and the original spa.

Be warned – or maybe, be grateful – that cell coverage on Orcas is pretty spotty. You can count on getting a signal in Eastsound and at the ferry depot. Other than that, it’s doubtful. But hey, getting away from it all means getting away, right?

Now, getting to Orcas is a bit of a challenge. First, if there were no traffic, it would take four hours to get to Anacortes from Portland. Unfortunately, because the Olympia-Tacoma-Seattle-Everett megapolis is in between Anacortes and Portland, it’s unreasonable to count on a four or even five hour trip. We left Portland a little before 2 p.m. (about an hour later than we’d planned), and we didn’t get to Anacortes until just after 8 p.m., and we had minimal stops along the way. Our return trip was even worse; our ferry dropped us off in Anacortes around 1:30, and we didn’t get home until 10:30 p.m., although we did stop for a leisurely dinner in Bellevue (more on that later).

Second, you are depending on the ferries. (Make a reservation!) I’ve only been on Washington state ferries a few times ever, but my sense is that they are generally reliable. Generally being the key word. We had a reservation for a 7:20 p,m. ferry, but the day before, one of the state ferries went down with engine trouble, which meant ferries had to be shifted to the higher need route to Friday Harbor on San Juan Island. Our 7:20 ferry was canceled, which worked out since we didn’t get there until 8. We were able to get on the 9 p.m. ferry, but it didn’t leave until close to midnight because of the havoc caused by the missing ferry.

All that smoke and ash in the air did make the moon glow a pretty awesome red, though, in this picture I took during my several hour long wait at the ferry depot. (If you are into Pokemon Go, the Anacortes ferry depot has a gym and several Poke stops, which I took great advantage of during the wait.)

About the drive back…. Seattle traffic was so horrible that, seeing numerous crashes on the 5 and the 405, we decided on our return trip to stop for dinner and fun, hoping that they would clear up. As I’m a board game lover, we picked MOX Boarding House in Bellevue. If you’ve ever been to Guardian Games in town, it’s like that, only much brighter and airier inside. Upon learning that we were visiting from out of town, one of the employees gave us a tour of the store, including all of the private game rooms (even the secret one!). It’s a very friendly place, and we were able to play our own games. We each ordered a dinner salad, and I can report that the seared Ahi tuna salad was very good, and provided a generous amount of tuna for the price. (Continuing the Pokemon Go theme, this place has two gyms and two Poke stops!!!)

Oh, and those Seattle crashes? They cleared up but were replaced by others….