The course was advertised as flat and fast, and for me it was just that! The 2nd annual Run to Remember in Washougal WA on Saturday before Memorial Day is a great kickoff to the long weekend. The morning started with the 1 mile race for all ages and speeds. We arrived as some mile walkers were still finishing their race, and there was still plenty of parking available in the big lot along the race course just two blocks from the start. Packet pickup was a breeze, and my husband’s same-day registration went quickly as well.

The event did a really good job at reminding us of the meaning of Memorial Day. The race’s charity partner is NW Battle Buddies, an organization that matches companion dogs with veterans who suffer from PTSD. Before the start of the race, all participants were invited to join the 22 Pushup Challenge to raise awareness that each day 22 veterans are committing suicide as a result of the PTSD and their experiences during wartime.

After the National Anthem, the race started. The 10k participants were off first, with the 5k racers close behind five minutes later. The course was indeed flat and fast. It started with a slight downhill towards the river, a quick ramp up to the dike, and from then on the path was very flat with beautiful scenery. There was a slight breeze, the mighty Columbia River to the right, and Mount Hood straight ahead. 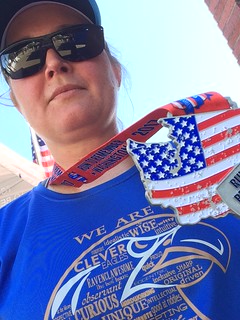 I was able to make pretty good time, skipped the crowds at the water station just past the mile 1 marker, and I reached the 5k turnaround shortly after. The way back went just as quickly, and I was able to maintain my pace as I approached the zig zag back off the dike trail for the remaining two blocks towards the finish line. I was very happy to see that I was able to finish in my fastest 5k time in a long while!

The post race party was fantastic! There was bread by Franz, yogurt and granola, sausages, French toast, and fruit. Additionally, the Deschutes beer garden was open as well, offering a choice between a lager and an IPA. The awards ceremony for the 5k took place while we were enjoying our breakfast and beer, with awards and ribbons given three deep in age group divisions. Overall winners received gift packs from Deschutes beer and Franz bread.

Complete results can be found here and free race photos can be downloaded here.