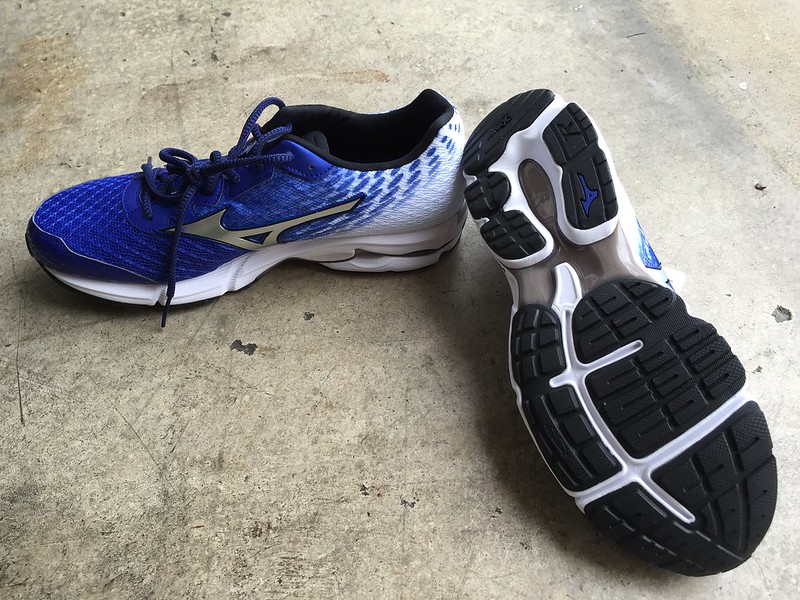 Run Oregon sometimes receives products to review. In this post, Run Oregon provides some impressions on a pair of Mizuno Wave Rider 19's and Mizuno Wave Inspire 12's they received just before the holiday.

Being an ex-college baseball player, I am very familiar with Mizuno. I roamed shortstop with their mitts since high school and Mizuno long-sleeved tops were my insulator of choice on those soggy game day mornings. I was very comfortable in their footwear as well, although I have to admit that was solely in the form of my cleats. Maybe I should not have been, but up until few years ago I had never really associated Mizuno with road running. Now, in trying my hand (or feet, I guess) at wearing Mizuno running shoes, I think I may be sold as a new consumer. As if harkening back to my love of baseball, I was really pumped when I saw the sample colors on the new Mizuno Wave Rider 19's - an awesome royal blue/white color scheme reminiscent of my favorite team (and World Champion) Kansas City Royals. While the colors are simple, Mizuno really made them pop. The other color schemes in the 19 lineup are more simplistic than I remember them being (black/silver, blue/yellow, pearl/black). I love the simplicity in the colors and the committment to Wave Rider design.

For those who have been used to the Wave Rider series, the general populus consensus is that they take what has been their bread and butter and expand on it. The Wave Rider 19’s seem to mimic the same outsole pattern, while making some minor changes to the design of the midsole and the material of the upper as well.

I found that the initial fitting of the shoes were immediately comfortable. The upper looks (if that makes sense) like a Mizuno, but has a new material. It feels super flexible and conforms to my foot without feeling boxed-in and constricted. Basically I felt like my foot had the ability for some play, yet was able to adapt to my own personal level of snugness. They attribute this to their new “upgraded premium sock liner”, and I guess I can’t argue with them. Even with the added padding, I never felt like I was bouncing on air or anything and  there was still a solid ground feel.

Their midsole is an updated version of their “U4ic” (described by Mizuno: delivers optimal shock attenuation, durability and a superior ride that’s 30% lighter than AP+). Under the insole is a new foam (2mm of EVA Foam) that gives it a softer feel. While I haven’t run in Mizunos in about 4 years, it was a simple transition. The new cushioning has a “plush” feeling to it I have not experienced any pain or downtime due to sore feet or legs during the transition. My feet feel destined for a shoe like the 19, but those with wider feet or lower arches may not find things as comfortable.

It appears that there was a lot of backlash about the uncomfortable fit and feel of the Mizuno Wave Rider 14’s. While I do not have the experience of what it felt like to run in the 14’s, rest assured that this is an extremely comfortable shoe that appears to have scrapped the issue with the 14’s and are progressing forward in full lime yellow, cushioning, race-winning glory.

[Editors Note: Shortly after receiving these shoes, our blogger was laid up with an injury, severely cutting into her running abilities. We wanted to highlight the shoes, with the expectation that we will follow-up if and when she gets back into running.]

One of my very first pairs of running shoes was a pair of Mizuno Wave Inspire 8’s. I was fitted with them at a local running store after having my gait analyzed. I overpronate when I run, and the Wave Inspire model offered moderate suppport. They were white with silver and fuschia accents–fairly standard looking, but they were good shoes that served me well. Over the years, I’ve tried quite a few other brands and models of shoe, but I was eager to throwback to my early running days and lace up with a pair of the Wave Inspire 12’s, Mizuno’s latest model that was released in October 2015.

Right out of the box, I noticed that they’re BRIGHT. I love how bold and colorful they are (I received a pair in Calypso Coral/Silver), and the style of the shoe just looks really nice (fact: I run at least 5% faster if I think my shoes look cute). The fit and and experience of wearing the shoes didn’t disappoint–they feel really nice on my feet, and the soles offer a nice balance of cushion, flexibility, and support due to the blown rubber in the front, and the U4ic midsole. The uppers were really comfortable as well. I’m really happy with my new Mizuno Wave Inspire 12 shoes!