I woke up around 3:00 on race morning to the sound of thunder rumbling and rain hitting the roof. I curled up in my warm bed and begin to dread the impending sound of my alarm, as it surely meant I had to head out into a wet stormy race in a few hours. Fortunately, when my alarm did go off, the rain had tapered off and I no longer heard thunder. I still packed an inordinate amount of clothing for every possible temperature and weather condition. You never know this time of year what the weather will be like over the course of just a few hours. I met my running group at Starbucks and we carpooled from there to Molalla to catch the shuttle bus to the start area.

As we rode the school bus up to the Molalla River Trail Race, I sort of wished I was back in my warm bed. This was to be my first race since June, due to a series of unfortunate events. I knew I was not ready for a 10K race and my nerves were reminding me. I kept telling myself to just have fun. We arrived with more than enough time.  In fact, we probably were a little over zealous with our early arrival, but with the limited parking and the shuttle bus ride, we decided it was better to be safe. 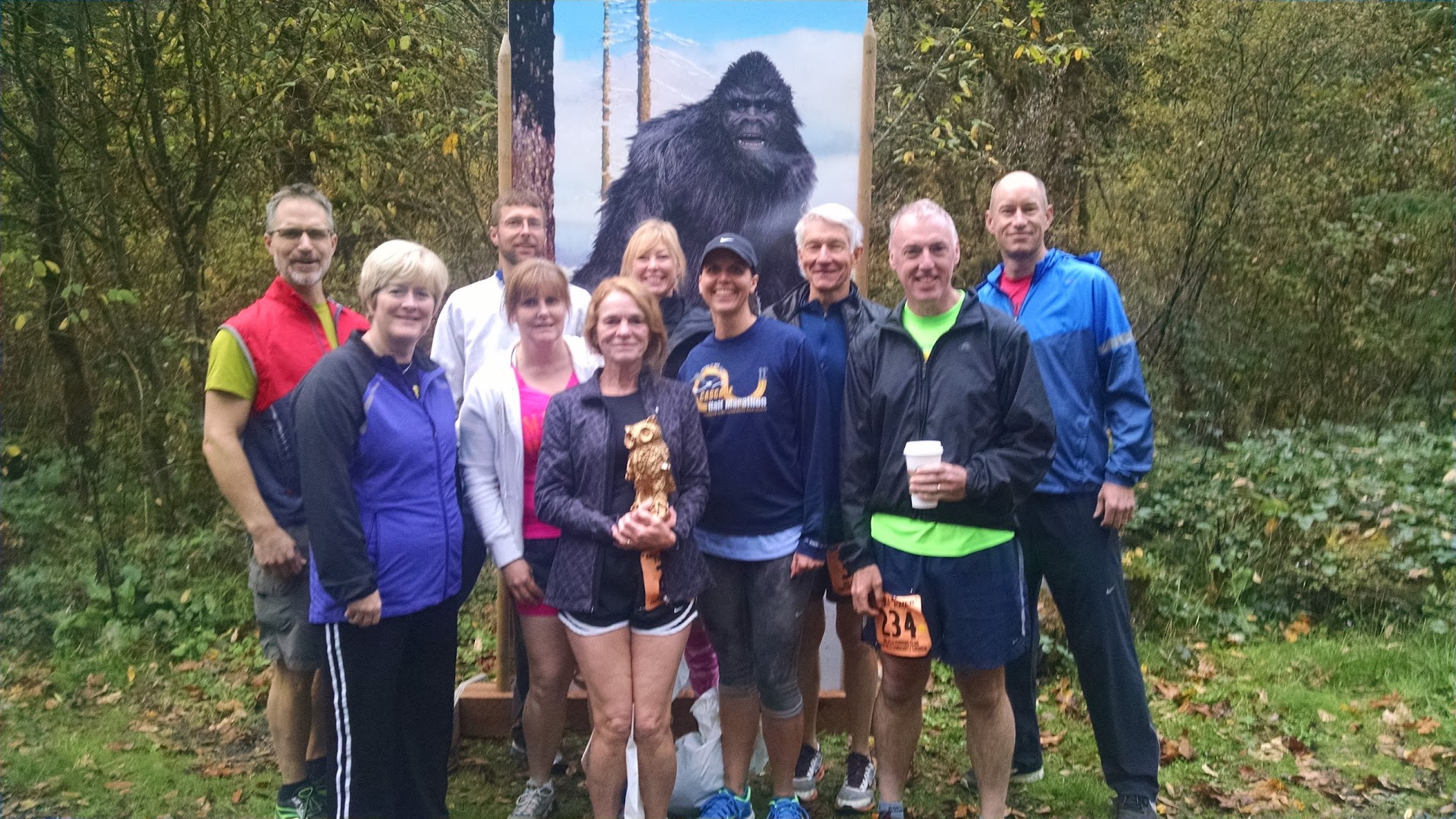 My running group and I ready to run the Molalla River Trail Race.

The starting area was 1/3 mile walk from the check-in area, so announcements were made as each distance needed to begin the hike up to the start. The start area wasn’t real spacious, so just the 10K group filled the area. The 10Kers were started in 2 separate groups to keep the trail from getting too crowded. I headed out with the 2nd group and did my best not to start out too quickly, as I had heard that there were some killer hills to conquer on this course. We started out on a wide dirt/gravel road and people could easily run side by side. There was a lot of chatting and laughter as we began. I enjoyed the atmosphere and the beautiful fall scenery and settled in to a comfortable pace as we encountered lots of ups and downs. As we were approaching the first water stop, roars could be heard in the distance. It was Big Foot – making himself known and offering high-fives to all the runners.

There had been lots of “warnings” about The Wall – a killer hill that was sure to reduce most of us to a walk – so every time we hit an incline I wondered if this was it. As we reached the turn-off for the 10K around mile 3, I soon saw a sign that said, “Welcome to The Wall.” Based on what I had heard about this hill, I had decided in advance to conserve my energy and walk it. At first it didn’t seem like much of a hill, but it didn’t take long before I was panting as I power-walked up this never-ending hill. It seemed like “The Wall” was almost a mile long, but since I forgot my GPS watch, I really have no idea how long it was.

When we finally reached the top of The Wall there was another water stop and then we were running on a single track trail. This is where the race got fun for me. I love the variety of running trails but rarely get to run them, as there aren’t many trails near where I live. I enjoyed the constantly changing terrain and scenery. Time went by pretty quickly because running on unfamiliar trails didn’t allow the luxury of a wandering mind. I had to stay focused on the trails and my footing, as well as the people in front of and behind me, at all times. Before I knew it I was dropping down to the dirt/gravel road again and heading to the finish line.

I finished in a much slower time than any 10K I’d ever done, but it was a blast! The weather was perfect, the setting was beautiful, and I was back to running races again. That dread that I felt earlier in the morning was replaced with a sense of satisfaction and happiness that I had run a 10K again and had a lot of fun doing it.

Afterwards there was warm chicken noodle soup to enjoy and great Bigfoot medals for age group winners along with finisher medals for all. The only negative was having to wait for enough people to get on the shuttle bus after the race before the bus would leave. I will admit, we were a bit impatient, but we survived the wait and made it back to where we parked without too much delay. 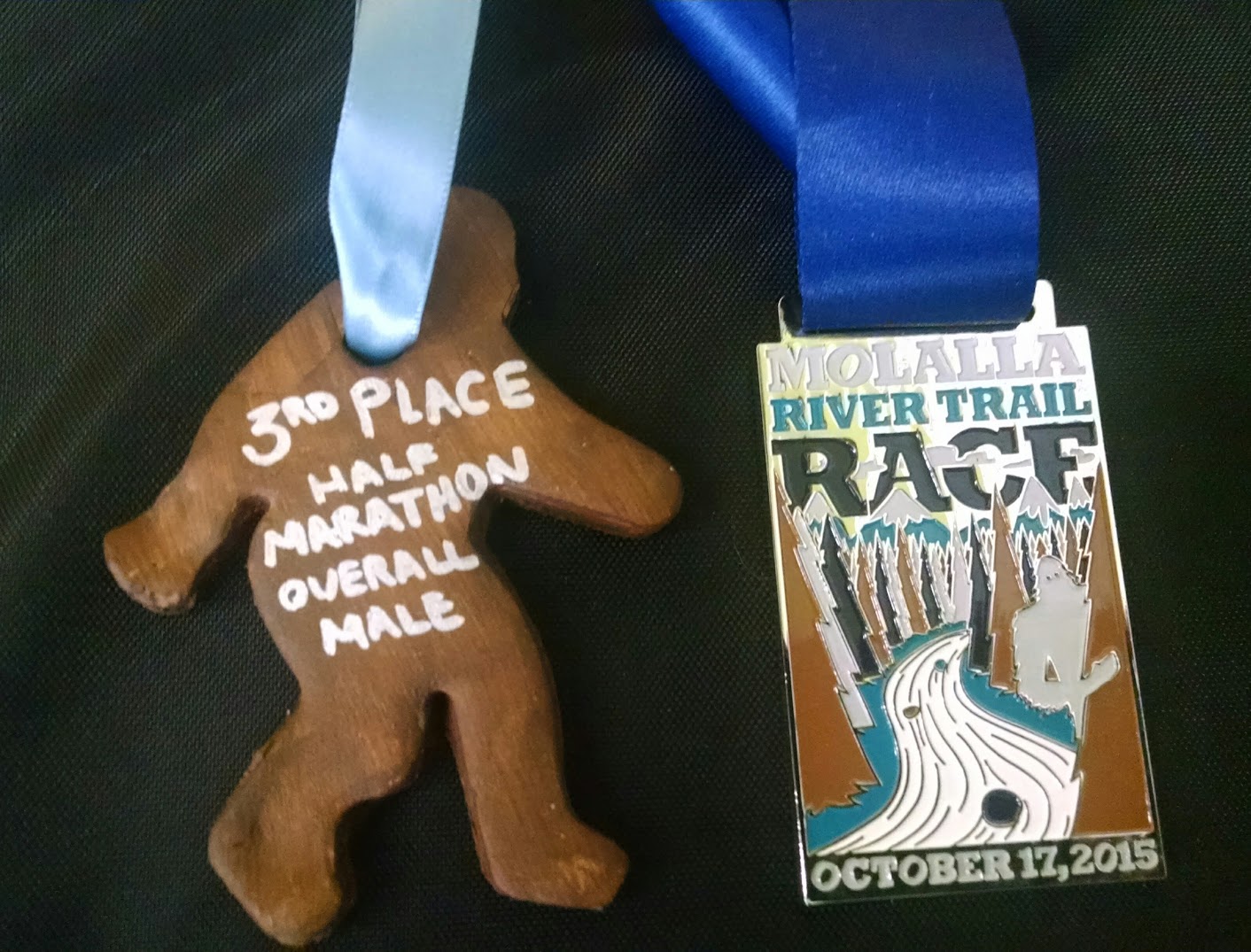 I would highly recommend this race, which has a 5K, 10K, and 1/2 marathon. This year we got great fleece-lined beanies in place of a race shirt. I’m sure it will come in handy this winter when I need a cozy warm hat. I plan to run the 10K again next year for sure. It is now on my list of races I want to do every year. See you there in 2016! 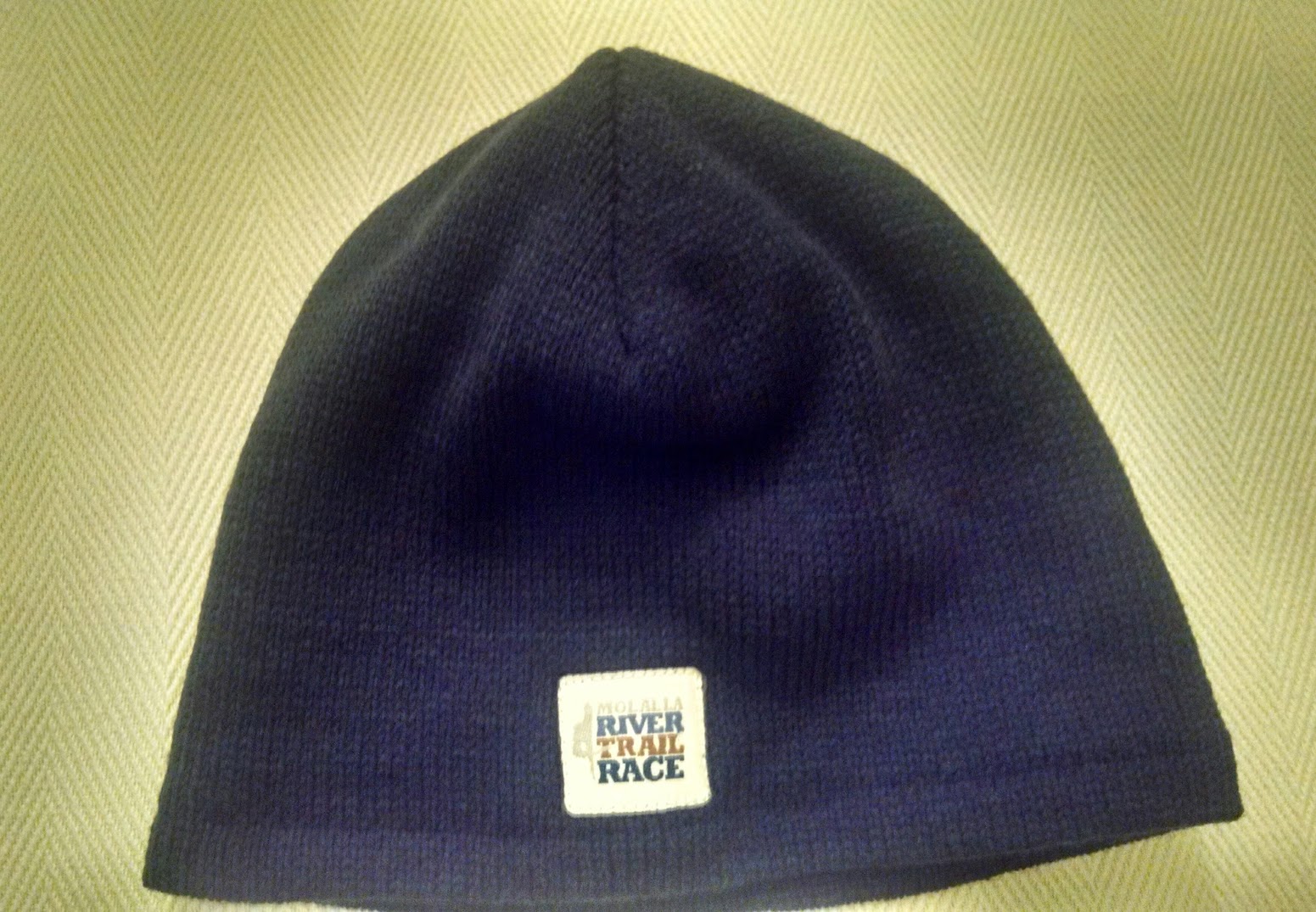 Recap: Run with Paula's 2015 Bridge of the Goddess Half Marathon and 10k

Council Crest is always worth the climb. 📸 by

Whether you are tackling a 5k or 26 miles, your ru

Took in a little #salttherapy at the brand new @my

Put a little color in your Black Friday with the n

You know it’s true. Have a great #turkeytrot eve

Been enjoying these runs with no puddles lately.

A little winter running in the Gorge. 📸 by @r

The Waterfront Loop may just be our favorite “ci

A little trail work morning at the Forest Park Rak

Who is still enjoying this sunny, chilly autumn we

What an epic weekend at @alpine.running Run the Ro

Harkening back to our weekend #runcation in #South

The @mizunorunningusa Wave Neo Wind is a beautiful