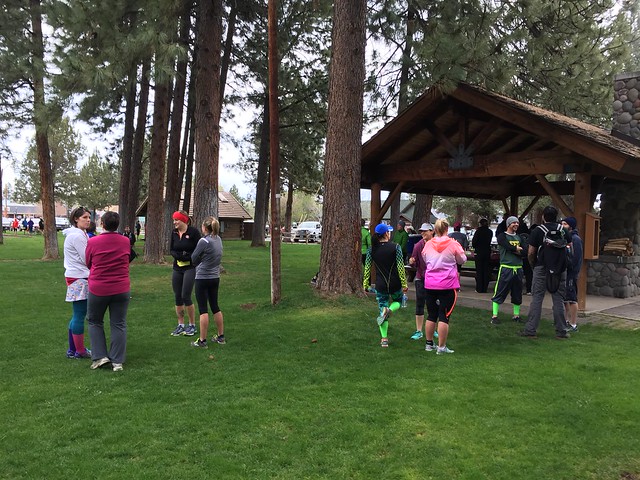 Leg 1 of my Central Oregon running weekend started in one of my favorite cities - Sisters. This city just outside of Bend is home to small town charm, beautiful scenery, great coffee, beer and pastries, and an ever-increasing running and multi-sport community. The 2015 Sisters Better Half Marathon took place on Saturday, April 25 and delivered in all ways. The race started and finished at Village Green Park, a nicely manicured park complete with gazebos and plenty of room to stretch. There was a fire blazing in one covered area on the cold race morning, a welcome reprieve from the chilly air. There were local pastries on site which I decided to sadly pass on, but were really great for those who were participating in the relay event. You see, the event had one course, two distances, and three total events to compete in. Runners could run the full half marathon, which consisted of two 6.55 mile loops. Or you could run in solely the 6.55 distance. OR you could bring a buddy and do a half-relay which each runner running one loop.

The cool temperatures and threats of precipitation were non-issues and the morning turned into almost ideal racing weather. With no concerns of running in cold rainy temps, my nerves went more towards how I would do on my first of two half marathons on the weekend.

We started out by heading East from the park on the always quiet Sisters residential streets. There was one “major” intersection that was easily monitored by course martials directing traffic. Runners ran through Creekside Park (complete with a small bridge), before entering the paved trails around FivePine Lodge. We maneuvered through the area before being spit out onto Elm Street and headed on a short out-and-back. While this was a “main” street, cars were few and far between. I enjoyed this section as it allowed us to see exactly how we were stacking up with runners ahead and behind us.

At about mile 2.75 or so we ran back by Village Green Park , the first of 5 times that runners would pass by (including the start and finish). My family didn’t make the trip with me, but this course was about as spectator friendly as it could be. After this, runners headed out west through a residential neighborhood that I only wish I could afford. Some local residents were out on their porches and smiled and cheered us on while sipping on some hot coffee (jealous). The final 2 miles of the loop consisted of the long circle around the middle and high schools and passed the start of the Peterson Ridge Rumble – bringing back fond memories.

The second loop was obviously identical, and for some reason I never really found myself dreading the repeat. By that time, the sun had warmed me up even more and the smell of the pines were filling my nose with relaxing pheromones. I was feeling good enough to actually pass a few runners on the second loop.

The post-race faire was wonderful. We received a great t-shirt, pint glass, and delicious food (pulled pork sliders), beer (RPM from Boneyard – mmmm), and local cider ALL for the registration fee of $45 for the half, $30 for the quarter, or $55 for the relay. While this race was on the smaller end (154 total runners participated), it deserves a lot more next year. It was an amazing experience and the perfect kickoff to a wonderful running weekend.