With my wife out-of-town for a few days, I was placed in charge of two young girls - ages 5 and 3. When I am parenting alone, these things are pretty consistent - mismatched outfits, hair never being done, and racing in a stroller. My 3-year-old isn't old enough to understand the first (my 5-year-old does though), they both deal with the second, and they were both eager for the last, especially when our plan was to run the 3rd annual Run Your Tutu Off 5k in Corvallis on Saturday, February 21, 2015.

They picked out their tutus days in advance and wanted to be sure that I would be wearing one (“You can’t run in a tutu race without a tutu, daaaaaaaaaad”). I managed to find an old tutu of my wife’s and scrunched myself it as best as I could – good thing it was an elastic band – before we hit the roads for Corvallis.

Though I have been here a few times, it has been mostly for football or work with only a short run downtown and a race up near Bald Hill a few years back. The race was held at Chrystal Lake Park and the paved trails tucked gently along the Willamette River. The park was HUGE and beautiful – especially on a sunny day in the mid-50’s. The pre-race set-up was local with a couple of tents set up for bib pick-up, snacks, and raffles. Word was given that the race course was very straight forward – an out and back on a continuous stretch of paved trail. 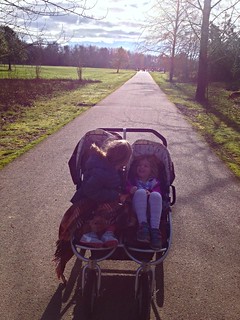 A week before the event, my babysitting plans fell through and I was forced to take both girls instead of just one in my new jogging stroller. This meant taking our double stroller which is NOT designed for running (a wheel fell off last race we attempted). It weighs a thousand pounds (or thereabouts) without any kids in it, so it’s essentially the equivalent of pushing a Hyundai most of the time. As a result, we started in the back of the pack and took our time maneuvering around people. The last thing I wanted to do was start out fast, lose a wheel, and congest everyone up.

Luckily, our stroller held up miraculously well. Steering it was like trying to maneuver a boat, but that was quite fitting as we were able to get some serene views of sun glistening off the Willamette. There was “chalk-motivation” throughout the course of the race, which was definitely needed as I was powering through a few short, yet steep, inclines. The path was well maintained and the park was really a perfect area for a race. I could not have asked for a better place to run on such a beautiful winter (or is it summer…) run.

For being a small race with an RD who puts on this race once per year, there was some fantastic RD-ing going on:

Results were not chip-timed, and I haven’t yet seen a posting of times – but honestly I don’t think this race was solely about the time. It was a fundraiser for Furniture Share, and it did a great job of combining exercise, charity, fun, and tutus into one!

As my kids sat munching on at lunch at Sky High Brewery and Restaurant after the race, they both looked at me and said, “That was really a fun race”, that was all that I was asking for. And I have to agree with them.

2 Comments on To Tutu or not to Tutu, that was never a question: A Run Oregon review of the 2015 Run Your Tutu Off 5k