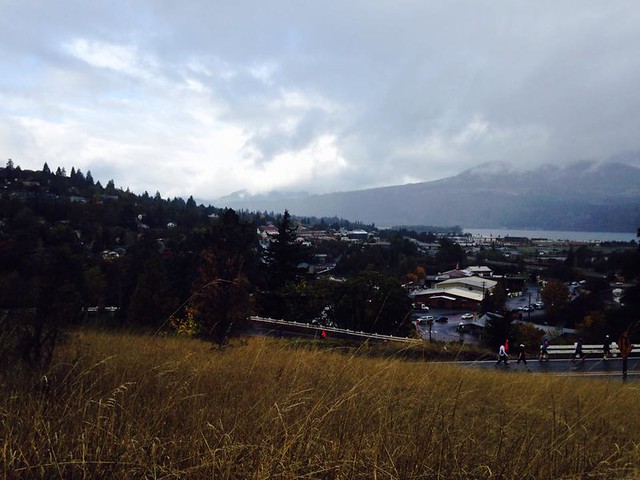 It is now Saturday, November 1, as I sit down to complete my recap of the 2014 Columbia Gorge Half Marathon. I know, I know, that's almost a full week after the race, where have you been? To be honest, I have sat down at my computer three times, and each time I just can't decide what I want to focus on: the event itself and the race swag, the actual physical race course, or the amazing Autumn scenery. All aspects of the race were so memorable that it is easy to see why this is one of the top Nationally recognized races out there. So, as I now sit down to complete this, I feel the only way I can do the race justice is to highlight all of them:

Admittedly, I am not really a “race swag guy”. I have enough race shirts boxed up in my attic that I generally love races which charge less but give the option of purchasing an upgrade for a shirt. I also enjoy medals, but don’t view them as “necessary”to complete my enjoyment of a race.

The Columbia Gorge Marathon appears to have a good little system going. As part of registration, each runner received a logo beanie (love!) and a custom-made medal. The beanie was a unique item to receive and fit awesome! It came inside a drawstring bag,which is an underrated gift for me,as I use them for packing up my post-run gear at work. There were a few local companies who offered up some discounts as well.

Following the race, everyone received custom-made ceramic medals. Sure, they aren’t the giant fancy medals that some races sport, but this one stacks up just fine. The pinkish-hued medal highlights the Washington hills and Columbia River from an almost perfectly visualized vantage point along the race course. By looking at this medal for years to come, I will be able to be transported back to memories of the race, much moreso than generic medals in my arsenal. Speaking of race course…

I can only speak to the half marathon distance, but I thought the course was an ideal combination of challenging and rewarding. After a short jaunt through the park, a solid few miles of climbing greeted us. I didn’t do my due diligence in checking out the course terrain beforehand, and the hills surprised me. They weren’t really overpowering, but I am happy that they took place at the start of the race (it is an out-and-back after all).

After an initial climb, the incline continued, but on a much more manageable and steady basis. And then we hit the Historic Columbia River Highway State Trail. Here is a brief, yet solid, description of the trail by oregonstateparks.org:

Where motorists on old U.S. Highway 30 once crept around curves high along the cliffs of the Columbia River Gorge, hikers, bicyclists and users of other muscle-driven forms of transportation leisurely enjoy the view from the Historic Columbia River Highway State Trail.

This paved trail is truly perfect for a run. I found the course to be a little like a blend of urban and rural running – all jumbled up and combined as one. The paved trail would fit in perfectly as a nice running path in an urban landscape, yet the surrounding environment is the exact opposite of urban. The scenery is truly something to behold…

Ah yes, the scenery. I have lived in Oregon for the last 10 years and am familiar with the wonder that is Oregon in the Fall. The leaves changing, the rainbows arching, and the smell of freshness that just permeates the air. Even with all of that, I was STILL blown away for how beautiful the run was. I can only imagine the awe and wonder that the runners from 39 other states felt on race day.

The starting point on the Columbia River is perfect. There is a lot of open space, and it is close enough to downtown Hood River that runners could walk over to local coffee shops before hand and head to one of the fantastic local breweries afterwards. It is also possible to meander over and check out the marina and catch a passing boat or two chugging down the river.

Even though there was some initial rain (it is October in Oregon), it never really materialized into anything major. Plenty of people, like myself, brough rain gear and never needed to use them. With the rain came a few fantastic rainbows, some of which were captured by some budding photographers/runners along the course.

I know it may have been impossible, but the only thing I was hoping for was a little bit more downtown Hood River running. I always like races that show-off what a city has to offer. I think it would have been cool to run through the main street and wave to the residents as they get their day started in this beautiful city. That being said, I completely understand that the logistics and cost of being able to do that is not productive, and there was a little bit of city running anyways – so I don’t want to seem like a complainer. The true beauty (and race namesake) is to experience the Columbia River anyways.

Once we hit the paved trail at the Mark O. Hatfield trailhead (the start of the marathon), the real beauty hit will full force. The trees created a natural tunnel of colorful Fall foliage overhead, and it was so easy to get lost in the rural landscape. I got the urge to just come back up here after the race had finished and go on a walk with my Golden Retriever and just soak up scenery and the views. And those views…

It’s impossible to do justice to the views. Shoot, the Gorge is picturesque when driving on I-84, but even more so on the trail. Every few miles, there were areas where you could really take in the splendor of the Gorge in all it’s beauty. I was making pretty good time, so I didn’t spend near as much time soaking in the views as I should have (NOTE: If you aren’t going for time I highly recommend packing a camera or phone for picture-taking and stopping along the way). The pinnacle for me was the Mosier Twin Tunnels. I had heard of these before, but they provided such a unique stretch and area that I literally got goosebumps while running.

Even while returning on the out-and-back course, I was never bored. The beauty was ever-present and I again lost myself in the serenity of the area. It’s not always easy to feel peacefully alone while running with 1000+runners, but the race just flew by as my troubles left my body and I became almost one with the landscape around me.

So while this race recap is now a full week in the making, I think it was worth it – much as the race was worth running. We talk a lot about running “bucket lists”, and some are always on the list (Portland Marathon, Boston/NYC/Chicago Marathon, etc). But this is one that you should slide into your list, wether you are from another state, or only a couple hours drive from the start.

The 2015 event is scheduled for October 25 and REGISTRATION IS OPEN! Do not hesitate. Make plans now. You won’t regret it.