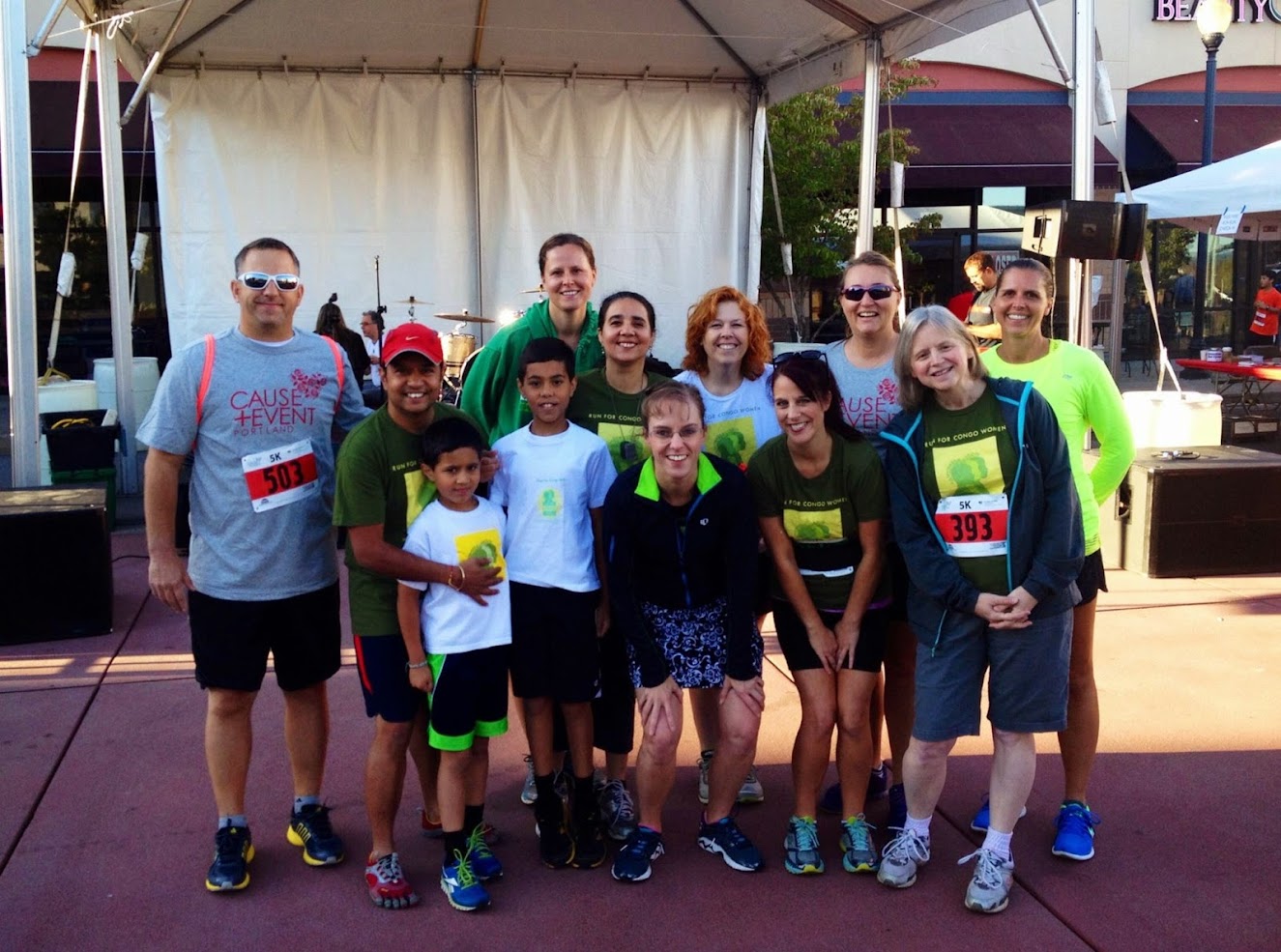 Team Congo PDX at Cause and Event 2014

When my alarm went off on Saturday morning, I really wanted to turn it off and go back to sleep.  But, I had the Cause and Event 10K to run, so I crawled out of bed wishing for a little more sleep. I had never been to Cause and Event, so it certainly wasn't the race that had me dragging, I just wasn't as rested as I wanted to be.  I was running this race as part of Team Congo PDX, so I needed to arrive a little early for the team photo.  If you aren't familiar with how Cause and Event works, you should know that it is the one event where you get to choose your charity.  Instead of the race organizers deciding where the proceeds will go, you sign up under the charity of your choice. As a part of Team Congo PDX, money from my registration fee went directly to this cause supporting women who are survivors of war in Congo.

This race was in Bethany Village, a location I was unfamiliar with, but when I pulled in I quickly spotted a volunteer that was directing cars towards the parking lot and made my way to the correct location. Without the wonderful volunteers, I probably would have wandered aimlessly for awhile!  Once parked, I made my way towards the race location and discovered that this race was a pretty big deal!  With vendors lining the streets, a stage set-up for a live band, and people milling about everywhere, I was surprised to discover that this was only year 3 for Cause and Event!  It had the look and feel of an event that had been going on for years. The energy was palpable and suddenly, my desire to crawl back into bed was a distant memory.

I found Team Congo, then made my way to the check-in area and picked up my race number and shirt in just minutes.  Both my bib and the shirt had my name on them!  How cool is that?  I had plenty of time to peruse the vendor booths, use the port-a-potties (twice!) and lead a team warm-up before we headed to the start line.  The half-marathon runners had started 30 minutes before we 10K runners hit the route and 10 minutes later the 5K runners followed.  The course was well-marked with different colored arrows for each different distance.  I will admit, I had to keep checking my bib color to make sure I was following the right colored arrow.  (Good thing they were color-coordinated, because I’m known for what I’ve come to call “exercise-induced amnesia.”)  The route had many twists and turns, and though there were several road crossings, most of our time was spent on paved trails.  We started the race with a gentle downhill slope then turned on to a trail for a not-so-gentle uphill climb.  I felt like I was wheezing before I had even made it a mile!  Fortunately, what goes up must come down, so the downhill was much appreciated when it arrived.  At one section of the much-appreciate downhill there were signs for each charity represented at this year’s event.  I tried to read them all, but with 92 charities represented, it was impossible to read every sign as I passed.  As the twisting and turning continued, there were always volunteers to make sure participants didn’t veer off course.  The hills also continued.  Every time I enjoyed a downhill, I also began to dread the inevitable uphill that was sure to follow.  Up, down, left, right, out and back . . . this route was never boring! Besides the varied direction and elevations, we were constantly passing runners in the opposite direction either from the half marathon or the 5 or 10K.  It was helpful seeing all the other runners and I was always wondering which way we would be going next.

The morning was quite warm so the water stations were hopping.  The volunteers did a great job at making sure everyone had water as soon as they were within reach. Despite the many water stations, around mile 5 I felt myself getting slightly dehydrated.  I was hot and yet I realized I had stopped sweating and started feeling goosebumps on my arms. At first I couldn’t figure out why I would be dehydrated after just 5 miles.  But, then it hit me that due to my city’s water temporarily tasting like dirt (due to low rainfall amounts,) I hadn’t been drinking my usual amount of water all week.  But, with just one mile to go, I knew I’d be fine and would be able to drink my fill of water at the finish line.

When I hit the finish line, slower than usual due to the warm temperatures and hilly course, my first quest was to find water.  Initially, I didn’t see any!  I asked Amanda, Team Congo PDX’s captain, who was cheering us all in as we finished, and she directed me to a long line.  I headed that direction to see there were 2 lines with people filling their reusable water bottles or dixie cups.  I didn’t see any bottles, so I stood in line and waited about 5 minutes for a tiny little dixie cup full of water.  I have to say, that was a bit frustrating.  I was so thirsty!  I wandered around until I found the booth that was handing out the reusable water bottles, then got back in line so that I could fill my water bottle.  While I appreciated the take-home water bottle and the lack of waste, I didn’t enjoy the wait to hydrate!

Once I was happily hydrated, I meandered around enjoying the music of the live band Hit Machine (Those guys are awesome!) and made my way to some more of the vendors and the post-race snack area.   Cause and Event was a tough course, to be sure, but a great hill workout and a well-organized event with plenty of helpful volunteers.  Like I mentioned earlier, for a race in just its 3rd year, it is quite the production.  The all-volunteer staff has done an amazing job at making this race amazing and allowing a variety of groups to support their chosen charity without the need to organize their own events.  If you know of a group that is looking for a way to raise money for a specific charity, tell them about Cause and Event.  All they have to do is gather their friends and show up to run or walk. Easiest fundraiser ever!

4 Comments on Race Recap: Cause and Event 10K