Sunriver is by far my favorite place to run, and the Sunriver Marathon For A Cause has now become my favorite half marathon course and the perfect way to enjoy Labor Day weekend.  With 2 half marathons, one on Saturday and one on Sunday, I chose the Sunday race because of the route (which is different from Saturday's course.)  This event, which is in its 4th year, is well-organized with plenty of cheerful and encouraging volunteers from packet pick-up to the course itself and at the finish area.  Packet pick up was available on both Friday and Saturday, so I dropped by the Sunriver Lodge on Friday afternoon.  I was in and out in a matter of minutes with my race number, long sleeved Nike tech shirt, and great tote bag that I will definitely use over and over. 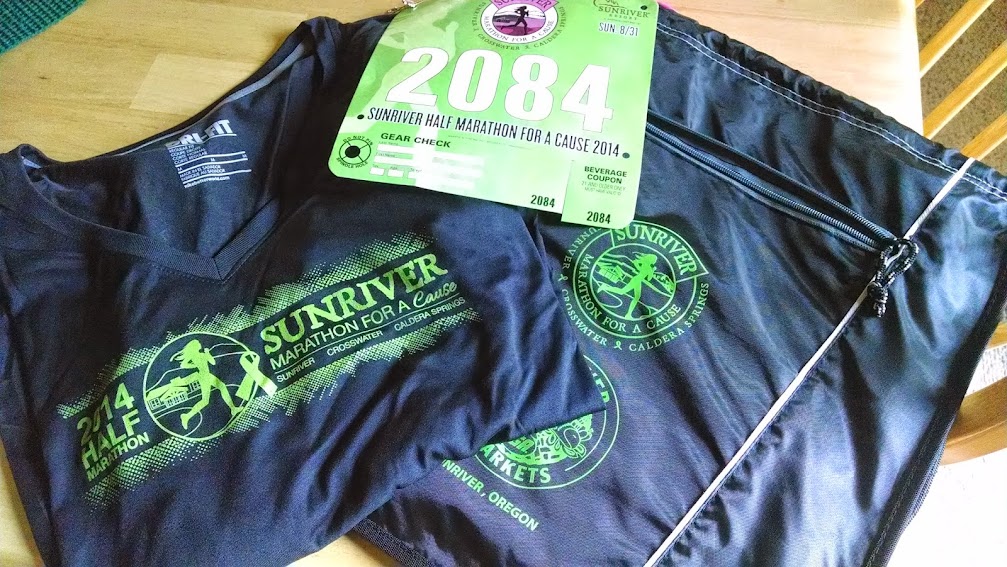 Sunriver Marathon For A Cause - Half Marathon Swag

On Sunday morning I arrived early, as I was a bit concerned about parking availability.  I had no trouble finding a parking spot, but I was hesitant to get out of my car, as my temperature gauge read just 39 degrees!  I knew I would warm up once I started running, but I couldn’t convince myself to wait outside for long, so I cranked up the heat and relaxed for awhile in the warmth of my car.  Eventually I coaxed myself out in time to hear the National Anthem being sung before the marathon runners started.  I hit the indoor bathrooms (Yes, indoor!) and waited inside the Sunriver Lodge for as long as I could before heading out to find a patch of sunshine to get my warm up in before the race started.  Soon the runners were called to line up in the starting area and it wasn’t long before the countdown was on and we were off and running.

I deliberately started out slow, very aware of the higher elevation and my need to ease in to my pace.  It seemed that a lot of the group was doing the same thing as we made our way out behind the lodge along Meadows Golf Course on paved paths.  My legs and hands were cold, but it wasn’t as bad as I thought it might be.  The route wound its way out to a road, then crossed Century Drive and headed out of Sunriver.  We made our way to what appeared to be a service road (which was more like a wide bark chip path) that led us to Crosswater Golf Course.  This private course is beautiful!  Surrounded by forest with the mountains in the background, we wound through the golf cart paths and over the many wooden bridges.  The frost on the greens made me feel colder, but added to the beauty of the course.  From certain sections of the course I could see runners everywhere I looked as they wound back and forth along the paths.  Even though I am not a golfer, I truly understood the appeal of this course.  The scenic views can not be beat!

When we made our way out of the golf course I was a bit sad to leave the scenery.   However, Caldera Springs was next (around mile 6) and though the scenery changed, it was just as beautiful.  Still running along paved paths, we were now running through the silent forest.  By this point runners were pretty spread out and the only other runner I saw was a guy in a white shirt running in front of me.  If you are into cheering crowds and city running, this course is not for you.  But, this was right up my alley.  No sounds except the music coming from my headphones and no distractions.  Just running out in nature.  I was loving it! At one point the winding forest paths became an uncharacteristic straight stretch. Perhaps it was the slight downhill slope, or maybe the fact that I finally saw some other runners up ahead besides “white shirt guy,” or maybe it was the juxtaposition of the forest scattered on one side of me and the straight line of telephone poles on the other side with the trees behind, but something here made me break into a smile.  I was reminded that I was truly enjoying my run.  We left Caldera Springs over a hanging wooden bridge which rocked as I ran across it, making our way towards the Sunriver Business Park.  This area was less scenic, but I began to see many runners that I hadn’t seen in front of me on the winding paths.  Slowly, I began working on passing them while “white shirt guy” still led the way, never letting me get close enough to pass, but never getting too far away for me to keep pace with him.  Around mile 11  there was a killer hill that took us out of the business park and back into Sunriver.  I had known the hill was coming, but it still sucked the wind out of me. When I finally reached the top, panting and barely even running anymore, I focused on slowing my breathing and trying to recover as I ran.   The gradual downhill was a welcome relief and I soon had my second wind and was ready to get to the finish line.  Still following “white shirt guy,” I began making my way back towards the Sunriver Lodge.  I had been following this guy since about mile 6 and was appreciating his pace leading me along.  Around mile 12 he suddenly began looking back behind him as if looking for someone.  I thought this was strange, as he’d been running solo for miles.  Suddenly he stopped and turned around, as if going back for someone.  After following him for so long, I strangely felt alone and a bit sad that he was no longer leading the way. It was weird how a complete stranger, who probably didn’t even know I was there, had become my running partner.  But, continuing toward the finish line, I began focusing on passing a few more people who were now within my sights.  Even though I knew where the finish line was, the route to the end was a bit deceptive.  I kept thinking that the finish was just around the next corner, but then there would be yet another corner.  Finally, around the last bend the finish line was in sight.  I heard my name announced as I crossed the finish line and was handed my finisher medal and a commemorative glass.

I walked around for awhile trying to catch my breath and keep my legs moving, while appreciating that even the finish area had great scenery with Meadows Golf Course nearby and Mt. Bachelor in the distance.  Even in my post-race “delirium” I was able to enjoy the beauty and start thinking about running this race again next year.