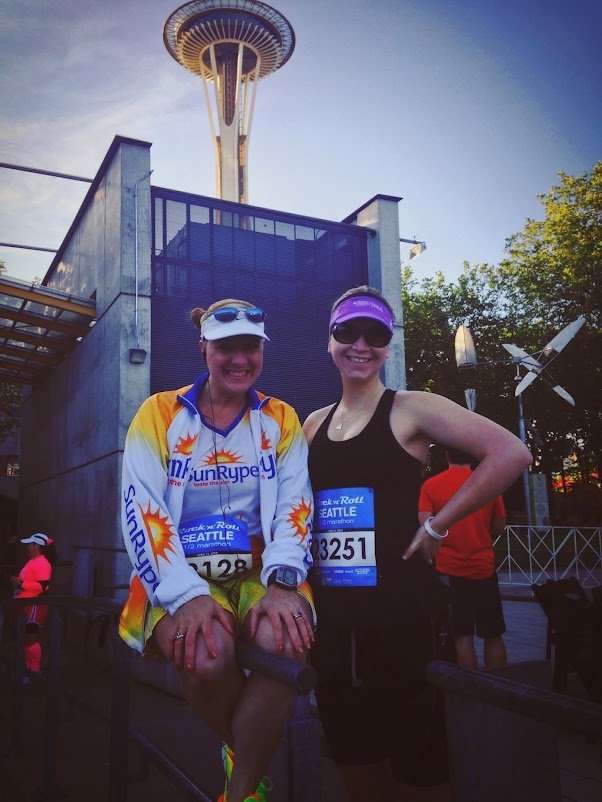 MAV + I in the VIP section of the Seattle Rock 'n' Roll Marathon before the race.

"Are you doing okay?" Maryalicia asked furtively. "Do you hate me?" "NO," I gasped as my feet slapped against the asphalt in the middle of a well-earned a walk break. "I don't hate you." "Okay. Good," she replied cheerfully. "Walk break's over!" "!@#$," I thought.

When we started just a couple hours before, Maryalicia had complimented me on my good running form and far-too-optimistic pace. At first, our scheduled walk breaks seemed so often and so long– now they couldn’t come fast enough or last nearly as long as I needed. What happened?

Flashback a few hours earlier, and MAV and I were getting up in a sunlit dive of a hotel room. Our room looked over the wide chasm of a construction ditch with the scenic view of a crane– and not the avian variety. Having done a lot of travel marathoning in the past, I knew that last minute hotel bookers got last minute product– either the $$$$ penthouse at the Hilton, or the still-overpriced hostel that just happens to be– for the one day you need it– four times its usual seasonal cost. We were stationed in a version of the latter. It was of course, still a place to sleep, shower, and change, and sleep we did for six glorious hours before it was time to trot out to the VIP section of the Seattle Rock ‘n’ Roll Marathon.

VIP came as a surprise to me. I’d heard that MAV might have VIP access, but I’d never had VIP status anywhere in my life except for once at a Secret Sisters show. It was like the one time as a kid that I’d caught a piece of confetti sent out over a crowd– in elementary school, that was as good as winning the Powerball. Now thirty years old, it takes a little more than a few strips of airborne paper to get me out of bed; thankfully, the VIP treatment did just the trick with unlimited, individually bottled Gatorade (lemon lime), bottled water, Umbria coffee, and all the breakfast foods you could dare to eat on a heated deck beneath the Space Needle before pummeling your body over the course of 13.1 to 26.2 miles.

Breakfast in the VIP section of the Seattle Rock ‘n’ Roll Marathon. Two more rows of food, a coffee station, and a water/Gatorade station not pictured.

I stuck with the usual– coffee, Gatorade, and peanut butter on one piece of bread. I was a little scared, to say the least, to start this race. With a new job and wedding planning, my training had more than slacked– it was non-existent. I’d run half marathons in February and April and two halves back-to-back the first week of May, then I decided I was burnt out and needed a break to rediscover what I loved about running, fitness, and my body. I started running a mile to my local Barre3 studio every morning from Monday through Friday at 6:00 AM and Sundays whenever I didn’t have work to catch up on. My arms became more defined, I lost 10 lbs, I felt stronger and more nourished– but– come race day for the Seattle Rock ‘n’ Roll, it had been six weeks since my last long run. This is basically how it went down:

Mile 1: Ok. Start out slow. Everything is great. I’m in the fast-people corral with MAV but: AMERICA. Why is Maryalicia blowing kisses to that old guy on the stage? Is my phone broken? Did I put on sunscreen?

Mile 2: WHOOOO!! Let’s do this. Gravity is awesome. Downhill runs are awesome. How tall are these skyscrapers? Are there buildings this tall in Portland? Why haven’t I ever visited Seattle before? WHATEVER. DON’T CARE. HAVING FUN.

Mile 3: Oh hey, Friend, you need a bathroom break? I guess I’m magnanimous enough to stop for that. That’s cool. I could totally finish this whole thing in like sixty minutes but we’ll wait in line behind this cool band while the person already in the Porta Potty is clearly giving birth.

Mile 5: Slow down? Why do you keep telling me to slow down? I can totally keep this pace up for another eight miles and change even though I’ve only run five miles two times in the last six weeks.

Mile 8: I AM THE MAYOR OF CHAMPION TOWN. After having spent the last three miles fantasizing about a 2:20 finish and being greeted with flowers at the end by a complete stranger, I am pretty sure that is going to happen. I tell Maryalicia proudly that if the rest of the course is this shady and flat, we are going to sprint the entire last mile.

Mile 9.5: We’re in a dark tunnel and the sounds of other runners cheering around me creates a physical sensation like a liquid blanket settling over my body. A DJ plays music I can barely distinguish from the sharp cheers I hear in this impromptu rave I have apparently decided to attend. Someone hands me a Salted Watermelon Gu. Obviously I am awesome enough to try something new on race day even though I have literally said the words “nothing new on race day” no less than forty-five times in the last twenty-four hours.

Mile 10.2: The Gu tasted like the liquid amoxicillin that my mother force fed me as a child in the ’80s. I can’t decide if this is a good or a bad thing. I am starting to feel weird.

Mile 10.5: Remember that Portlandia skit where Fred and Carrie go to L.A. and their pale, northwestern skin can’t take the sun? Remember that music that was playing in the background? That is the music playing in my head right now. I am fluorescent white, running on a highway, and I am dying.

Mile 11: Maryalicia reminds me of my rule about not taking walk breaks down hills and asks me “Don’t you still want to finish under 2:30?” I will probably have to kill her in her sleep.

Mile 12: We’re running past one of the largest and most iconic ferris wheels in America, and I could not give a damn. I beg Maryalicia to leave me behind. She looks confused and refuses. “No man left behind!” she cheerfully calls from a gentle jog ahead of me. Clearly she has no idea that there is a 50% chance I am going to die out here.

Mile 13.2: Ok. The medal is kind of cute. Shaped like a coffee cup. I guess that would be original if it was 1996. I refuse to open my mouth until someone puts a mimosa in my hand. I am still basically dying, but there is a prospect of pizza and couches in my future.

Mile 13.3: The VIP Section overlooks the headliner stage, where the Presidents of the United States are warming up. I am going to eat ALL of the food. All of it. There will be no food left when I am done. I plug my dead iPhone into an official charging station, load up a plate, and grab my first bottomless mimosa. The chair I sit in is the best thing that has happened to me all day.

Two hours later: After a shower, change of clothes, and a hotel check-out, I am back at the VIP Section for another round of mimosas, a turn with a Master Stretcher (is that a real thing?), and a ten minute massage with someone who clearly came from a celestial plane. MAV drove me a little crazy, but she also drove me to my best race time all season. Life is good. I guess I’ll keep doing this race thing after all. See you next year, Seattle.