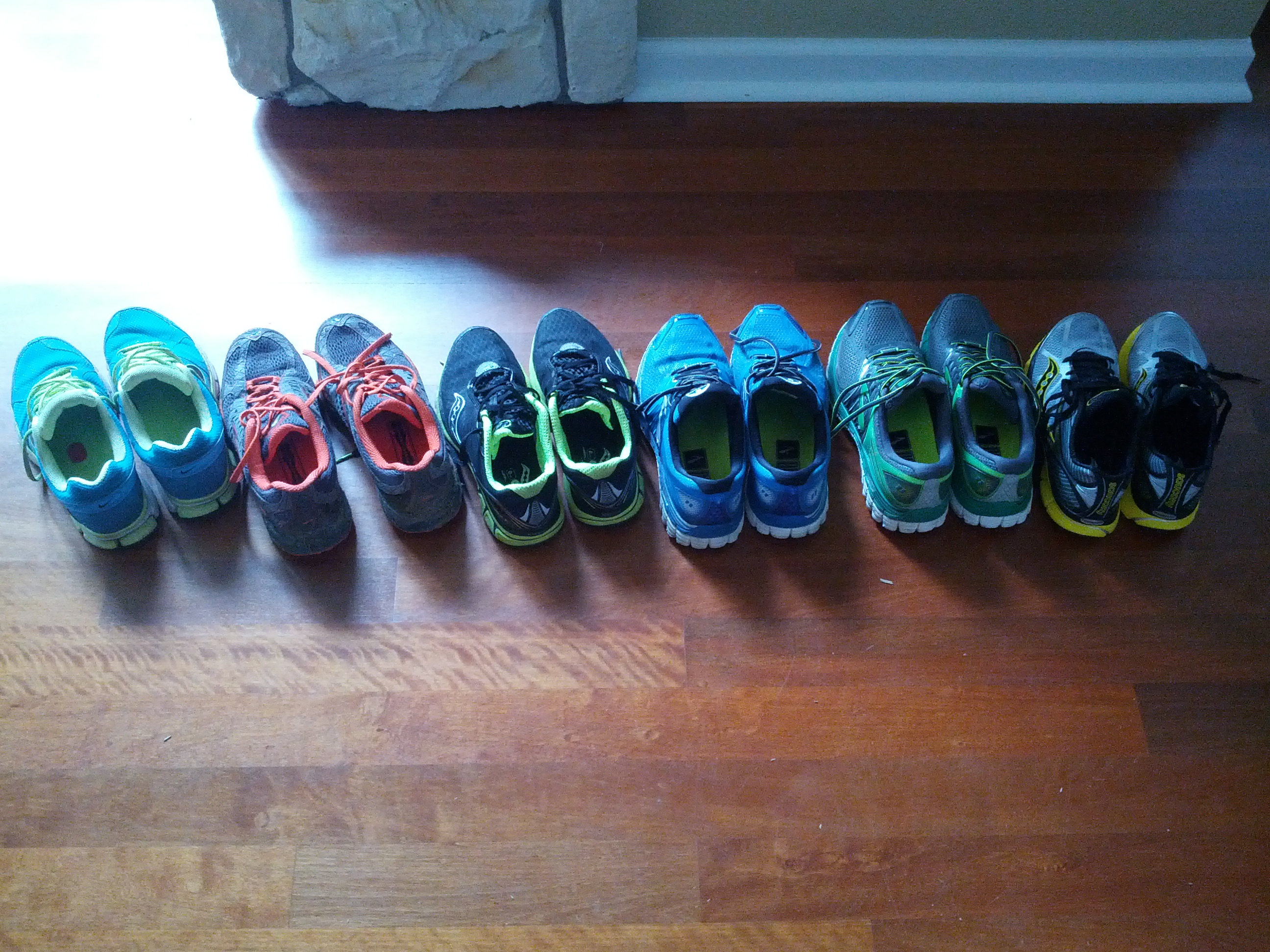 Let's talk running shoes! Unless you are elite enough to have an endorsement deal with a shoe company, you're probably on the hook for running shoes. And given the usual recommendation to ditch a pair of shoes after 400-500 miles (see here and here and here and here), a relatively non-extreme 30-35 miles per week can have you burning through four or more pairs of shoes a year. Considering that shoes run (ha ha) about $80-150 a pair, that's not chump change!

Most running websites seem to acknowledge that there’s a high degree of variability, depending on the shoe, the runner, the running surface, and so on. Some experts who don’t necessarily agree with the hard and fast number tend to go by how the shoe feels, or how the runner feels after a run (i.e., if you start to feel new aches, it’s probably time to get new shoes).

I’ve kept some of my retired shoes because I like the colors, and also because I use them when cross-training. (Yes, I could spend even more money on cross-training shoes, but things are already kind of ridiculous….) Sometimes I go to the gym intending to cross-train, but the Concept2 rowing machine is being used, so I end up running on the treadmill . . . on a “retired” pair. The blue pair of Brooks Glycerin 11s in the photo above (fourth pair from left) has over 600 miles on it.

I see that I haven’t exactly followed that 500 mile guideline. Besides the 600+ on that pair of Brooks Glycerins, I had 566 on the Nike Air Pegasus pair in the picture, 668 on a pair of Saucony Kinvara 2s that aren’t pictured, and 713 on another pair of Air Pegasus (not pictured). Oops.

What are easy ways to keep track of how many miles are a pair of shoes?

Because I’m kind of obsessive, I log my runs on a number of sites, including Fitocracy and Daily Mile. One of the very useful features of the latter is “gear management” — specifically, the ability to tag each logged run with a designated pair of shoes. Daily Mile then does the math and let’s me see right away how many miles I have on each active pair of shoes. I can also tell the website when I’ve retired a particular pair of shoes, so my list of active shoes isn’t cluttered up with shoes I no longer use.

Why do I have so many different pairs of shoes?

I didn’t really know what I was doing when I first started running back in the beginning of 2011, so I just went to Dick’s Sporting Goods and bought the cheapest pair of shoes that seemed to fit. It wasn’t until early 2012 that I went to Road Runner Sports and went through the whole custom fitting routine. The saleswoman suggested getting different pairs of shoes, which ended up being the Air Pegasus 28 and the Kinvara 2. One reason was to use the lighter Kinvaras for racing, and the other was to rotate shoes so that they could recover and thereby last longer. Note that this “decompression” theory doesn’t appear to be borne out by a study, but there is yet another reason that it might make sense, which is that different shoes stress your feet differently, thus possibly minimizing overuse injuries.

Anyway, I was pretty happy with the Air Pegasus 28s, but apparently when the 29s came out, Nike had made some non-trivial changes, which many reviewers seemed displeased with. Besides, by the time it came time for me to get new shoes, Road Runner was out of my size of 29s anyway, so I couldn’t test this change myself. As a “free agent,” I found that the Brooks Glycerin 11s were by far the most comfortable new model that I tried.

As for the Cascadia, I toyed with trail running for a while, and ended up springing for a pair of trail running shoes. I don’t do that much trail running, though, so I think most of the relatively low mileage on that pair has come either on grass fields (along the perimeter during my son’s soccer matches) or on light snow.

Where do I buy my shoes?

I’m a supporter of the idea of trying out any new model of shoes because sizing, feel, support, and other factors can and do vary among manufacturers. Neutral versus stability shoes may make a difference as well, but is something that’s probably very hard to figure out on your own. Running-specific stores, like Road Runner or Portland Running Company, are great because they have a wide selection of shoes, are staffed by people who run, and are set up to analyze your footstrike, etc.

(I’ll just note here that I am a big fan of Amazon, but my personal view is that if I try out a new model of shoes at a store and get the gait analysis, etc., that it would be really uncool for me to skip out and order that new model online from Amazon simply because of price. I figure that Road Runner “earn” a higher price per sale by offering the other services that Amazon simply can’t. Whether subsequent pairs of the same model should be bought from the bricks-and-mortar store is a different call, but I do keep in mind that the bookstore Borders went out of business because it couldn’t compete with Amazon, and I definitely missed its presence at Bridgeport Village.)

Can I reduce how much I spend on running shoes?

Apart from stretching out how long you keep them, there are other things you can do to reduce the cost of shoes. Here are a few tips:

* If you like Road Runner Sports, join the VIP club. It’s $25 a year except for the first year, when it’s only $2. You get 10% off everything, free shipping, and a 90-day period to return shoes for any reason. Basically, you more or less break even at two pairs of shoes.

* If you like Portland Running Company (which is, after all, a local store), join the Race Team. It’s $50, but you get 15% off everything, plus a custom designed singlet, access to exclusive events, support at local races, and more.

* Stock up when the shoe model you like is at the end of its production line, just as the newer edition is getting ready for sale. When I first discovered the Air Pegasus 28 and Kinvara 2 and ran long enough in them to know I liked them, I pounced on Road Runner’s “endangered shoe” sale and bought two pairs of Air Pegasus and one Kinvara even though I still had plenty of miles left on my initial pairs. Not all manufacturers seem to allow big clearance sales (I’m looking at you, Brooks!), but you can save a bit with those that do. For example, right now, Saucony Kinvara 4s are listed as “endangered” and, depending on color and size, can be as much as $20 off the $99.95 list price.

* Join Ebates. This is basically a referral site, kind of like how you see some websites that are Amazon affiliates; if you go through their link to Amazon, you don’t pay anything extra, but the websites get some small commission on whatever you buy. Ebates is like that, except it shares the commission with you. So if you start at Ebates and then link through to Road Runner, you get 5% cash back. But wait, every day, there is a Daily Double, so if you see that Road Runner is that day’s double, you would get 10% cash back!