For runners that enjoy swift competition, the Stumptown Quarantine 5k, organized by Team Red Lizard, was a big draw. Not only does the club have a reputation for attracting fast runners, but it offered a two-week window in which people could sign up. Runners could literally see how the competition stacked up when deciding whether or not to sign up. (We see this sometimes with the Greenway Time Trial, an ORRC race for which I’m a volunteer race director)—as live results are posted, runners and walkers get motivated to challenge the top times or to try and better their own time, based on how others seem to be running that day.)

The women’s winner of the Stumptown Quarantine 5k was Flannery Cerbin-Bohach, originally from La Crosse, Wisc., and now living near Cresco, Iowa. She and her husband, also a runner with a 2:19 marathon to his name, and their 3-year-old son live “in the middle of nowhere” on a hobby farm. This part of Iowa is just south of the Minnesota border and covered with rolling hills and high bluffs. I was intrigued by this fellow Iweegan who was running a race put on by a Portland-area running club, so I reached out to find out more about how she got involved. Cerbin-Bohach learned about the race through social media, and signed up. “This race was especially appealing because it was a pretty competitive women’s field,” she says. 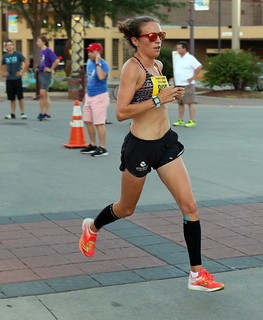 Cerbin-Bohach and her husband are members of Runablaze Iowa, a club aimed at developing and supporting post-collegiate runners based in Iowa. The club is based in Des Moines, nearly three hours away. (As an Iowa native, I should explain that we give distances in driving time and not miles.)

Last winter, Cerbin-Bohach set her sights on a 5k PR because she figured ”speed is the first thing to go with age.” She wasn’t deterred by the cancellation of all in-person races, running two solo 5k time trials and clocking finish times of 17:50 and 17:40. These practice races and the Quarantine 5k were all run on the same course.

Her previous 5k PR was 17:15 (of which she had her doubts of the course accuracy). But from her workouts and performances at other races, she thought a sub-17 5k was within reach. Shaving nine seconds off, Cerbin-Bohach finished the Quarantine 5k in 17:06, a pace of 5:30/mile. “I did surprise myself though because I actually executed it and made it happen. It was quite a mental break through. I imagine others can relate to that feeling of shattering a mental wall in running or in other aspects of life.”

Some people swear by solo runs and others will avoid them at all costs. For Cerbin-Bohach, it was what she needed in order to prove to herself that she was physically and mentally tough enough to reach her goal. She adds, “Had I run an in-person 5k I would’ve been distracted by the other runners and just settled for what my body knew was a familiar pace. Pushing myself to a new limit on my own was an education for my lungs and legs. I hope it translates to repeating the performance or bettering it once we’re back to in-person events.”

So while we know she won’t be heading to Oregon for a big race any time soon, we hope that she’ll come to our area for another race. “Under normal circumstances,” she says, she “wouldn’t fly halfway across the country for a 5k” so we wonder … maybe the next Portland Marathon? “I could never have that attention span,” she says, “for a solo marathon. We will see what the fall brings. I hope there will be in-person races, but if not then maybe another virtual race is in store.” She’s finished four marathons, but says she’s “still learning how to race them.” 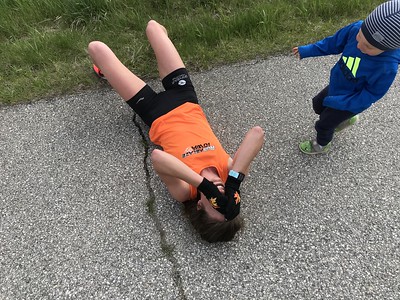 As for participating in the Stumptown Quarantine 5k, Cerbin-Bohach had an internal dialogue all week whether she should submit her results to the Stumptown Quarantine 5k. She says, “I felt self-conscious that I was an “outsider” as most appeared to be from the Pacific Northwest. However, I’ve always felt personally motivated by competition and that got the better of me. I watched results pour in and I felt like I should contribute to that virtual sense of camaraderie and the spirit of the sport. It was one of the more competitive virtual 5ks I could find too. It was exhilarating to be thrown into the mix in a “national field,” that was certainly a feeling I wouldn’t have felt in a local race this Spring.”

Cerbin-Bohach ran a great race, but more importantly, she gained perspective that I think is important to share: “Obviously, with virtual events there are the non-equalizing variables at play … we’re not all running the same course, in the same conditions. But, gosh golly there are still lessons to be learned about mental toughness, strategy, and race prep.” And for those of you still figuring out how to use your GPS watch, she adds, “Oh, and I appreciated that this opportunity forced me to figure out how to use Garmin Connect.”

Check out the Stumptown Quarantine Summer Series, kicking off on Saturday, June 28. We’ll have a post with more information today at 2p PST, but you can register online and learn more here as well.