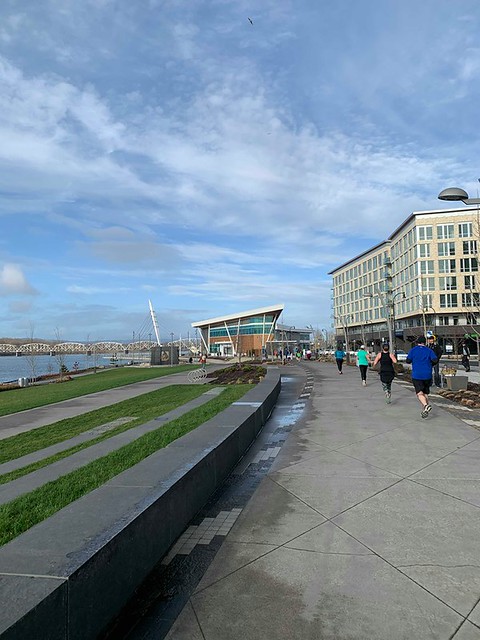 For my first race of 2020, I was looking forward to something local and lower miles (in case the winter rain was pouring down). It turned out that Race for Warmth in Vancouver was exactly what I was looking for, and more.

I avoided checking the weather all week, knowing that this January the snowflakes, raindrops, and sunshines on my weather app have mostly been lies. It was not until the night before that I checked and saw anticipated rain all morning long. Rain also greeted me in the morning so when I left at 7:30am (love that 9am start!), I had all my gear in the trunk. What a great surprise to see sunshine peeking through as I crossed the bridge into Washington. And that sunshine would be around all morning through my prep and run.

The race website had highlighted plenty of parking in the area. I missed the turn for the large parking lot but was able to find free street parking about four blocks from the starting line. It made for a nice warm up and not too far after I finished. 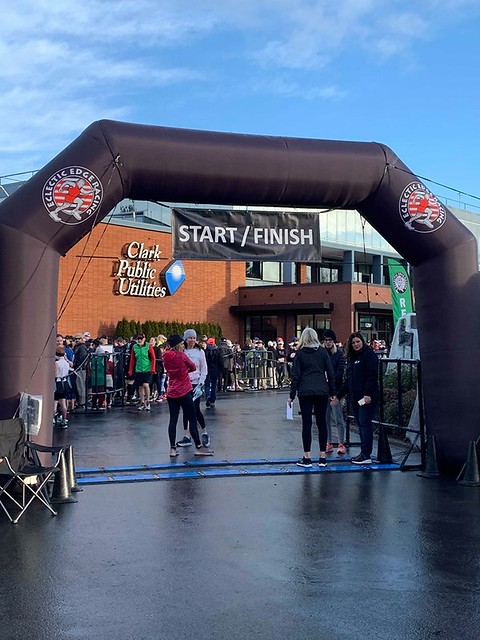 Packet pickup was a breeze and wandering among the booths, it felt like a very community-based event. I saw people spotting friends they didn’t expect and lots of circled up groups visiting. There were free grilled cheese bites plus hot chocolate and coffee to help keep warm before the start. Tables were set up with raffle items; each participant got one free ticket plus additional ones were available for purchase as part of a fundraiser. I dropped my goodie bag back at the car (with a new water bottle, snacks, and local coupons) and was back at the start with about 10 minutes to spare.

The 10K started at 9am, with the 5K starting five minutes later. As one of the 10K participants, that plan to start so close together is one of my small critiques about this race. The two races used the same course for the first mile, which meant as I was getting onto a narrower trail near Fort Vancouver, 5K sprinters were trying to fly by. I felt their pain a few miles later when the two courses merged again and I was running in the street because walkers had filled the sidewalks. Thank goodness it was a quiet morning in Vancouver so there was no car vs. runner battles. 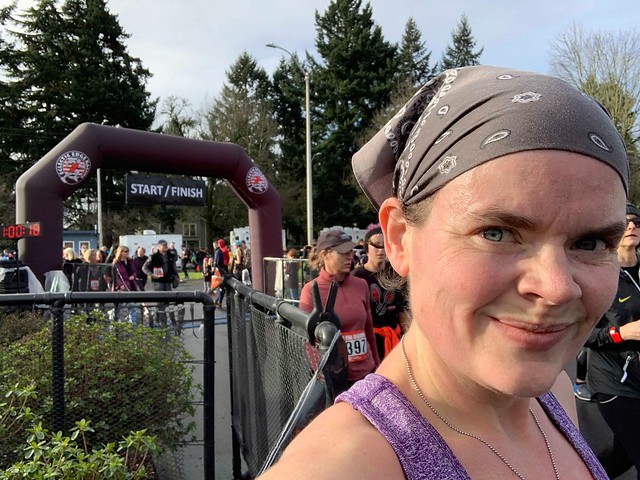 The 10K course went through the Fort Vancouver area, then used an out-and-back along the waterfront. Three aid stations had water at perfect spots on the course, and there were plenty of volunteers at corners to cheer us on. I was excited when we didn’t turn back the way we came and ended up along a new portion of the waterfront I had not seen before. It was lovely and looked like the perfect place for dinner and an evening stroll. There were some early morning walkers out (I imagined heading for brunch), but still lots of sidewalk for us runners.

I was a bit turned around by these new parts of the city and starting to get tired when the 5 mile sign came into view. I switched from NPR podcasts to some girl power music to get me done. The music was helpful in energizing the last mile dodging around walkers through main streets in the city. Once I spotted my car, I knew I was just a few blocks from the finish line.

The after party for this event was perfect for a January morning. There was soup or macaroni and cheese. And even better was the hot chocolate bar with marshmallows, whip cream, peppermint, caramels, and other topping options. As I cooled down from the run, that warm drink was all never knew I always wanted. There was also an after-after party at a local brewery. But my after-after party was complete with cocoa and warm clothes. Maybe next year I’ll be more of a Vancouver after-after-party girl.