Running in the dark is something that most of us do as a necessity so we can get our mileage. For a few of us, running in the dark happens when we find ourselves in a race that starts before daylight, or keeps us out after the sun goes down. If you’re one of those brave souls who finds themselves pounding the pavement, or the trail, in the black of night, you know how important a good headlamp is.

Recently I was asked to test the Biolite 330 No-Bounce Rechargeable Head Light, in Ocean Teal. Having owned and tried several headlamps, my primary concern is always one of battery life. The Biolite uses a lithium-ion battery that lasts for about 3 hours on high, or 40 hours (according to their tech specs) on low. Besides the claim to long battery life, Biolite also talks up the fit, which is known as 3D SlimFit Construction. And while that might sound a little hokey, I will say that it fits great, while also being foolishly light. But the real test is after the light go out!

My first outing was about an hour, which gave me a chance to test brightness, fit, and options, such as the tilt adjustment and the different spotlight choices. Interestingly, the low setting was plenty bright for my neighborhood run, where street lights were present. Even when I got into darker places, the lowest setting was quite good. Another initial thought was also how easy it was to adjust the light settings even while wearing gloves. Definite plus! 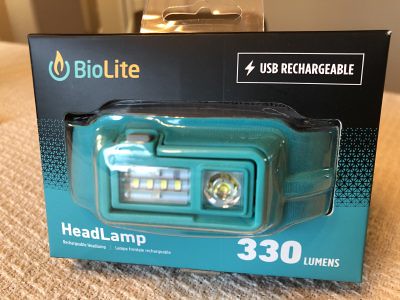 My second outing was a little more than 3 hours, mostly on trail, in the dark where no other major lights were present. Again, the low setting was decent, but the white spot with the white flood option was crazy, in how I could see everything, well in advance, while also not feeling like I was getting tunnel vision. I didn’t leave it on high for long, given I wanted to make sure I had enough light to get through my run, but it was nice to know it was so powerful in the event I needed it. At the end of that second outing, I had yet to charge the light after its first charge when it was new, meaning I got 2 good runs in before seeing the indicator light come on warning me to charge it.

My last run was another 3 hour affair, but I kept it on low the entire time. Again, the Biolite was plenty bright, and when I was done, only one of the battery lights had gone down. Admittedly, I am still a little skeptical of the 40 hour claim, but I do believe it will get me through the night. The fit is really nice, the weight is superb and the battery charges quickly with the supplied cord. Add all this to a really good price for a rechargeable headlamp and Biolite has a real winner.

Thank you to BioLite for providing us with a sample. Please read our transparency page for info on how we do our reviews.