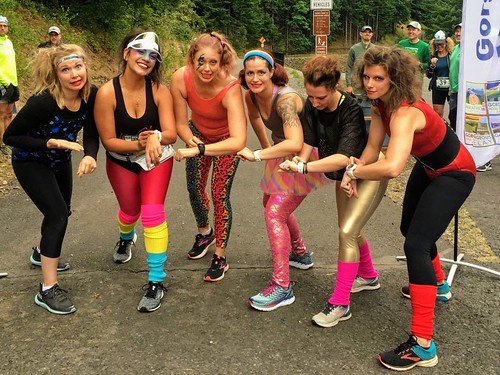 Robyn (who forgot her watch), Lisette (our supermodel), Kelly (the instigator), Nikki (pretty in pink), Reilly (disco-ready), and Naomi (it’s all about the hair) at the start line.

“I should have packed more clothes.” This was the thought running through my head as I ran my first leg of The 2019 Gorgeous Relay in the rain. Sparkly tights, a tutu, and a leotard not really meant for a running a relay in meant I was feeling water soaking pretty much every crevasse of my body. But don’t let that discourage you from this relay, because like EVERY Gorgeous event, it was still a blast. I don’t regret doing this, or ANY of The Gorgeous Series relays EVER because they are: So. Much. Fun!

Our day running the OG Gorgeous Relay, the one that started it all, began in Viento State Park near Cascade Locks. Our team, which had decided to make this a themed run and dressed as GLOW (Gorgeous Ladies of Wrestling-turned wRunning,) had an 8a start time — the final wave of the relay. This course, as expected, was phenomenally beautiful. You can’t really get any better than the Columbia Gorge when you’re running in Oregon. There was a brand new section of the course that runs down the Historic Columbia River Highway State Trail this year. Leg 8 takes runners up from Bridal Veil to iconic Vista House and the view from there is just simply stunning. After that, runners will take off towards Troutdale and finally back into Portland out to NE Halsey where the run ends in front of Von Ebert Brewing at Glendoveer. The relay sold out this year, so if you want to do it next year, sign up early!! 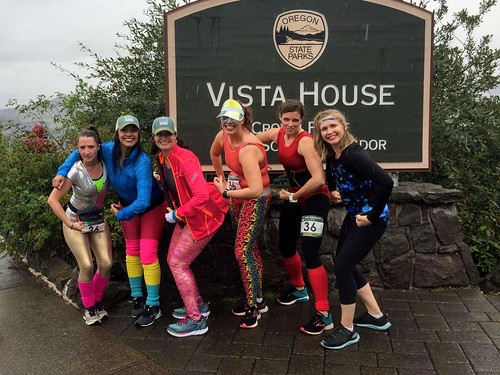 Nikki’s Thoughts: Like some of the members of our team, I wanted to get in extra miles, so I did legs #2 and #3 back to back. We had begun the race in somewhat dry conditions, but by the time I began running, it was raining, just as forecast, as it would most of the day. After fixing a wardrobe malfunction (getting dressed at 4:30a in the dark resulted in my friends noticing I was unwillingly wearing a thong, which was actually my leotard on backwards) I was ready to go. And by go, I mean slog up a hill for the first two miles against the rain and wind. This part of the race was not my favorite, though it was pretty.

After I cleared the hill, my ankles thanked me as I hit some flat road and found my team cheering for me at the exchange where I would not be stopping. It was nice of them to support me as I began my second, much flatter leg. Due to the fact that this relay is on the smaller side and we were the last team to start, I didn’t see any other runners while I was out there at all. I did see Race Director Kerry out there a lot, sweeping in behind to get signs, and rather than take that in a weird stalker way, I chose to approach it as though I had my own personal crew there to cheer me along. And Kerry and his wife Traci both are so great at that!

I got wet. Really wet. And I was wearing makeup that I could feel itching my face during the whole run, so I just tried not to blind myself. Puddles were like lakes in places, but it was kind of fun once I embraced it. I finally got to Marine Park, which I recognized from running Bridge of the Goddess a few years ago and after one small loop, I was done. For now, at least.

The hardest part was stopping because it didn’t take long for me to feel cold. And as mentioned in the beginning of this recap, I was wishing for more clothes. I had extras but they were the ones I was planning to wear after the race, and I still had one more leg to run later. The weather was not getting any better. Luckily, I’d brought my most comfy sweater that I loved bringing to relays because it is like a cozy blanket. If you have a sweatshirt like that, I recommend you take it to every relay you do that’s not in the heat. It saved me. I didn’t have to run again until leg #12, so I just did my best to huddle up next to the heater in the back of our van and try to dry out.

By the time I got to my last leg – the very last leg of the relay – I was ready to be done running and to start celebrating. I passed two women who were running the entire course from start to finish and they looked great. They had started at 7a and they were plugging away at a decent 9 minute per mile clip. I had opted to wear a coat which didn’t take me long to regret, as the rain had finally stopped and I got hot fast, I finally had just one last road to cross and was told by a volunteer that I had another .79 miles to go. This took us off Halsey and onto a bark chip path near the Glendoveer Golf Course. There were rolling hills and the bark chips were both a welcome change and an additional obstacle. Before long, there was my team, waiting for me at the finish line! They all held hands in a chain across the path, and they were chanting the words to “red rover.” I broke through pretty easily, but in all honesty, I didn’t really understand what was going on until I got there.

So the bottom line on my thoughts about this relay? It was a beautiful and fun course, and I had a great team. As most people who do a relay know, if you have a good team, that’s the thing that’s worth gold. It can make or break your experience. I had run the Gorgeous Portland Pub Run with them in May, so I already knew we’d found a magical unicorn team of ladies who just “got” each other and geniunely had a great time no matter what. The icing on the cake is that the Gorgeous Series runs are always done very well. There’s a lot of thought put into them and it’s very obvious that these race directors want you to have a memorable and fun time. My only complaint was the weather, and there’s no way to control that here in Oregon. It is what it is. I think I would’ve enjoyed the views more if I wasn’t trying so hard to keep the rain out of my face. But would I do it again? Absolutely! I would just bring more clothes. Especially socks. Lots of socks.

Kelly’s thoughts: I am the primary reason our previous Gorgeous Relays were not run in costume. I was afraid of chafing, didn’t want to spend money on a costume, and didn’t want to have to deal with getting everyone on the same page. Then, on our last relay, Lisette wore me down and convinced me to finally get on the costume bandwagon. Luckily, the Netflix show “GLOW” provided the perfect example of badass ladies embracing leotards and spandex, crazy hair and make-up, and being more focused on being strong than on how they looked in their costumes.

Not long after we started, as a matter of fact, our team put in place a rule: no negative talk about our fuel belts (you know, the extra energy you store in your midsection). So when you have that rule in place, the only thing left to do is to completely own the fact you’re wearing rainbow leopard print leggings and a sherbert orange leotard.

Gorgeous Relays attract a certain type of runner. The type that, when seeing someone wearing a skin-tight costume, appreciates the spirit and tells you that you look awesome. I love Gorgeous Runners. 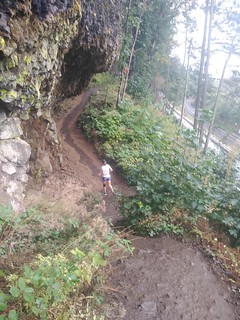 I ran legs #6 and #9. Leg 6 is 4.51 miles of rollers – nothing bad, really … until you get past Multnomah Falls. On the way there, you pass by multiple waterfalls, which was really something, and then I got the pleasure of weaving through tourists at Multnomah Falls in my costume. Then I got on the trail, was immediately reduced to walking, and maybe a little laughing at how crazy this trail was. I have to admit I got passed by two women on this trail, but we all had to laugh each time one of us dropped an f-bomb.

It was nice to have a section on actual trail, and I managed to stay upright, but the most amazing thing of all is that I learned running in a leotard is actually quite comfortable. I didn’t have any chafing, no wet shirt clinging uncomfortably, and honestly, 12/10 would run in a leotard again.

Despite the rain, and the aforementioned leotard, everything came together and I felt great on leg #6. When it came time to start leg #9, though, from Crown Point, I was cold, it was raining harder, and it was windy. Lucky for me, my teammate Reilly decided to keep running after leg #8 and join me for leg #9, so at least I had company.

The elevation profile for leg #9 looks like a nice, gentle downhill, but there were a few inclines for which I was not really jazzed. But, having company on a run makes hills a little less horrible, and before long we had less than a mile left. We got to the exchange and sent Naomi on her way – she was going to tackle legs #10 & #11 before handing off to Nikki to bring it home. 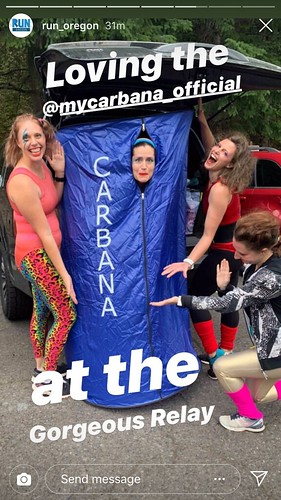 Like Nikki after her last leg, when I finished, I wanted nothing more than to change into dry, warm clothes. Lucky for us, we had a Carbana, a lightweight changing tent that hangs from the liftgate or door of a vehicle. This was a game-changer at this relay, because not only did it provide privacy, it is 100% easier to peel off wet clothes when you’re not crammed in the backseat of a vehicle. Zippers on both sides let you unzip the car side, so you can leave your bag in the vehicle and change without all your dry clothes having to wait on the wet ground until you’re ready for it.

By the end of this relay, we’d already made plans to set our calendar as soon as the 2020 Gorgeous Relay Series dates are announced. Better yet, I’m now fully on-board the costume bus, mainly because my teammates embrace it and aren’t afraid to go all-in. We won’t be at the Gorgeous Coast Relay (because of other race conflicts), but watch for team Friendship is Magic next year!