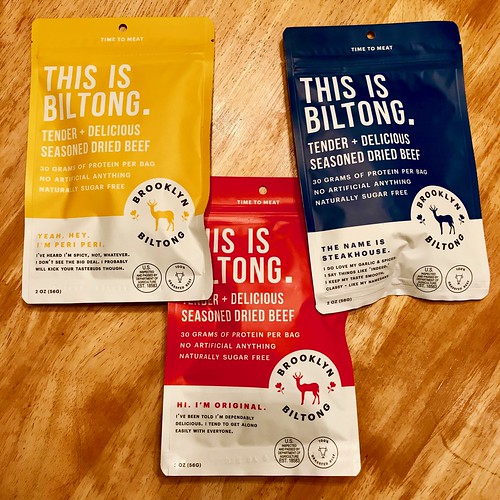 While I often seek out ways to have a more plant-based diet, I still have a primal urge for meat every once in a while. I can’t remember the last time I had a steak, but I do enjoy myself some beef jerky from time to time. I find it a nice packable post-workout snack that won’t weigh me down yet still give me some needed protein. So when I stumbled into Brooklyn Biltong I was intrigued to try some for myself. So what exactly is biltong?

[Biltong is] South Africa’s version of beef jerky. Dried slowly with air instead of heat, biltong maintains ridiculous mouth-watering flavor and tenderness. We like to say, if prosciutto and beef jerky had a baby, that baby would be biltong! Instead of drying our meat with heat and adding a bunch of corn syrups, we dry our grass fed beef with air and keep all sugars far away from it. The result is a tasty, moist improvement on the traditional plastic beef jerky you might be used to.

You can see the benefits just from that descriptor – 100% grassfed beef, no artificial ingredients, no sugar, and hand crafted in small batches instead of mass production. I’m not a guy who does many speciality diets, but Biltong is friendly to Paleo and Keto friendly diets. They have three flavors – Original, Zulu Peri Peri, and Jo’burg Steakhouse. Here’s a little more about Brooklyn Biltong before jumping into some tasting.

CEO Ben van den Heever grew up in Pretoria, South Africa. He could often be found at his grandfather’s butchery. Oupa Dawie (his grandfather) was a very lovable butcher and respected hunter. He made some of the “best biltong” in Pretoria. Ben would never leave without a paper bag full of fresh biltong. [When Ben] was living as a programmer and part time musician in Brooklyn, NY, he made his own biltong every now and again, based on his Grampa’s recipe. After he met and married American Emily Conley, they started their journey in an inspiring city!

The company started with Ben and Em (now van den Heever too!) on their Brooklyn stoop eating leftover wedding food. Having gotten married the day before, they were talking about the party. They kept coming back to their friends excitement over the small batch of ‘kitchen biltong’, happily devoured at the reception. This made Ben and Em think about the opportunity there was for biltong in the States. As they ate, they were sharing food with some homeless as they passed by. Ben said, “I wish we still had some biltong to give them.” And like a light flipping on, from those two moments, Brooklyn Biltong was born.

Now on to the testing.

Right out of the bag, it’s easy to see that this is not your typical jerky as we have have become accustomed to. 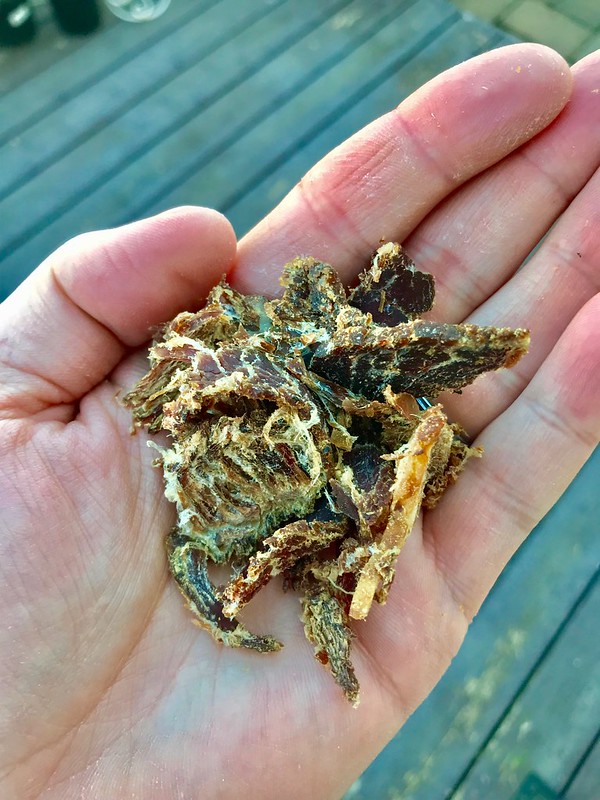 The Original is a tender take on beef “jerky”. It’s soft and delicious and would be perfect as a snack or a topping on some meal. Zulu Peri Peri has a little bit of kick to it – thanks to garlic and peppers (the name pays homage to the Peri Peri chili pepper. It’s not super hot, but the bite is really a nice accompaniment. Jo’Burg (as in Johannesburg) Steakhouse also brings the garlic but has a little hint of paprika to it.

After trying these out, I think these are way more versatile than I initially thought they would be. These feel like they would fit nice as a topping on a salad and pizza, as well as part of a charcuterie plate. The bags are definitely a little more expensive than the mass produced offerings in the store, but you are trading off added sugars for fresh and natural goodness. Right now, they can be purchased online, as well as in Cost Plus – World Market stores in Oregon.

Playing off of the quoted story above, about wishing that there was leftover food for the homeless, they donate 10% of their profits in actual biltong to The Homeless Bus in NYC – an actual bus that heads into New York City every Saturday night, providing hot meals, warm socks, and personal sized toiletries to homeless individuals on the streets of New York City.

Thank you to Brooklyn Biltong for providing us with samples. Please read our transparency page for info on how we do our reviews.