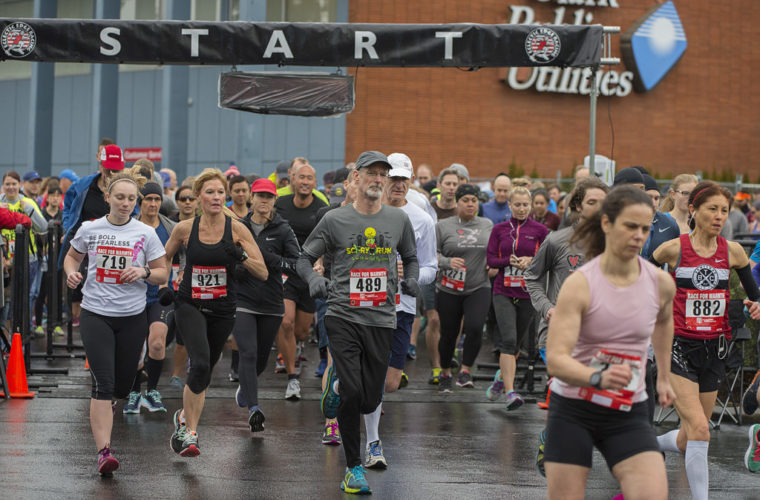 Are you looking for a fun race with a great cause to start off you 2019 race season? This might be the one you should choose! The Clark Public Utilities, Race for Warmth, supports Operations Warm Heart which has provided nearly $2.4 million to over 11,000 customers who are barely making ends meet, but don’t qualify for other government programs that could help them pay their winter bills. This race, now in its 5th year, is a great fundraiser for this program with every dollar of the race registration going directly to it. Over the last four years, the race alone has raised over $150,000 for local families. Awesome!

I wasn’t prepared for the sheer numbers of participants (590 in the 5k alone), the energy of the crowd and staff, and the well-organized and fun event. Color me pleasantly surprised!

The race started and finished at the Clark Public Utilities, a nice location with a large parking for pre-race festivities. We lucked out in the parking department, partly because some small parking spaces that had been missed, but mostly because we got there early (or what we thought was early). Bib pick-up was inside and a walk in the park. I’m sure it was crowded at times, but everything seemed to have a flow to it when we were there. There were complimentary drinks (coffee and hot chocolate), as well as fruit – both from local vendors.

Following the race, finishers received a free pint glass, beer was on-tap from the latest addition to Vancouver’s rapidly expanding brewery scene [and a local restaurant] was serving Three Bean Soup and bread that was quickly wolfed down. Not a bad post-race at all!

As I sat back on my drive home, I was so happy that I had been able to attend. My expectations were far exceeded, and I can be sure I will never underestimate Vancouver again!

There is both a 10K run and 5K run/walk option and a free kids race for kids ages 3-8 years old! The 10K and 5K go from the Clark Public Utilities building in downtown Vancouver, Washington and weave their way along the city and and along the Columbia River. Included with registration you receive a long sleeve performance shirt (guaranteed size if registered by December 31!!), draw string backpack with goodies, entry into prize drawings and don’t forget about the cool and fun after party!!