Sometimes I decide to run a race because it’s close to home and convenient, and sometimes I run a race for which I invite a friend from the East Coast, we book a hotel room and make it a super fun girls weekend on the Pacific Coast. The Run on the River in Astoria falls into the latter category. So we loaded into the car and drove out to the beautiful Oregon Coast! We made it to Astoria in time to pick up the race packet in front of Buoy Brewing Company on the Astoria Riverwalk. We had chosen a hotel just two blocks from the start line, and after a pizza dinner and a good night’s sleep, we were ready for race morning. 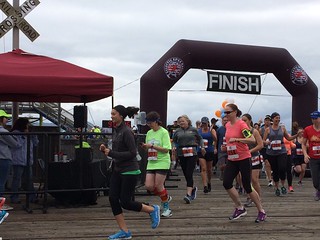 Our plan had been to run the half marathon, but due to nagging heel problems I had to drop down to the 10k, while my friend rocked her half marathon training and was ready to crush her goal. The half marathon started first at 9am, so we walked across the street to be there about half an hour before that. It was cool and overcast, perfect for a run. The MC for the day was already having fun heckling (in a good-natured way) race participants milling about the start area, which made the waiting time pass quickly. The start line was on the pier leading to the 6ht St Viewing Platform, and many runners took the chance for some pictures and selfies with the beautiful view of the Columbia. 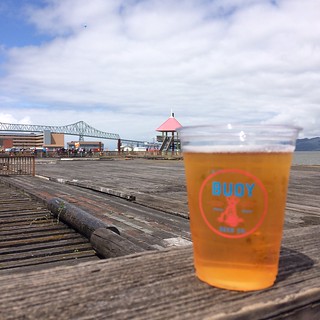 The half marathon started first at 9am. The USATF certified course took the runners to the west first for 1.55 miles to the first water station and turnaround, and passed by the start line again at mile 3.1, where 10k runners and walkers were getting ready for their 10am start. The course for the 10k was straightforward, flat, and well staffed with volunteers. The Riverwalk is paved in most places, but in other places it is made from wood planks, and the trolley tracks share the path as well. At times it was extremely important to watch ones footing (the worst bumps and holes were marked with spraypaint), and I was amazed that participants with running strollers were able to maneuver as well as they did.

The sights along the way were beautiful. The Astoria Bridge is one of my favorites, and it was in view during a lot of the race. The river was gorgeous, especially as the sun was breaking through the clouds. The support along was just right: on the 10k course it’s nice to have three water stations ready. According to my friend’s reports, the half marathon support was just as good. 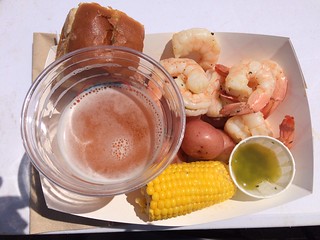 After we finished the run, we were able to race back to our hotel room to shower and check out, then we returned to the finisher’s party at Buoy Beer Co where we enjoyed some delicious beer and seafood boil. The sun was shining by now and it was a gorgeous day on the river. You can see pictures and videos of the event on Instagram and official race photos here. Results are posted by Eclectic Edge Racing. The 2019 race is scheduled for Sunday, May 19th, and registration is open with early prices available through November 24th.