The 5th annual Run on the River half marathon, 10k and 5k will be held at Astoria’s Riverwalk on Sunday, May 20th. The event is organized by Astoria Parks and Rec department and is a fundraiser for Astoria Parks Recreation and Community Foundation providing scholarships for individuals and families to access health and wellness opportunities through Astoria Parks and Recreation.

This race will be my tenth half marathon, and I’m looking forward to the flat course along the river and the cool ocean breeze. In order to avoid congestion on the course, the start times are staggered: Half marathon walkers have the option to start at 8:30am, then runners start at 9am. The 10k starts next at 10am, and finally the 5k at 11am. 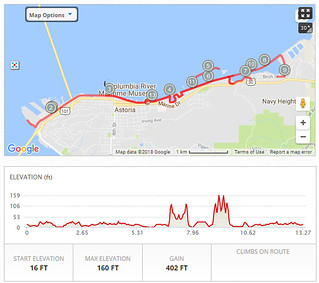 The course this year is USATF certified! All distances start at the 6th Street viewing platform, and participants head west, under the Astoria Bridge to the turnaround point after 1.55 miles on the shores of the Youngs River (overlooking the Astoria-Warrenton Bridge), then heading back the way we came. When we pass the start line, the 5k runners are done; 10k and half marathon participants keep heading east.

After passing the start, the 10k runners’ second half of their race is pretty straightforward and flat on the Riverwalk. The second 10k turnaround point is located near the Sea Lions of Astoria pier. The half marathon, naturally, goes beyond, even running out onto the pier to visit the Sea Lions! Then for a little while, the course becomes non-flat, or rather quite hilly, when adding an out-and-back excursion on the Riverwalk side trail to the trailhead in LaPlante Park. Returning back to the waterfront, we head east for another mile to the very end of the Riverwalk near the water treatment plant, and another hilly mile into a neighborhood to the final turnaround of the race near the mile 9 maker. From here, we head straight back to the start, skipping any out and back side quests we may have taken on the way out.

All finishers receive a beautiful glass finisher’s medal made by Fernhill Glass in Astoria. In past years the medal has been blue and red, and this year’s color will be announced soon on the Run on the River Instagram.