A few weeks ago, we highlighted the World’s Best Running Shorts II by TrueRevo. They have designed the “Smartphone Pocket System” (SPS), which “contains a strategically placed phone pocket on running tights & an outer opening such that the user can slide the phone from the outer to the inner just as if he is sliding it into a normal pocket.”

We were sent a pair to check out as well and here are our impressions:

I received a pair of their white on white shorts to try out. They look, feel, and perform like any solid pair of running shorts. They are light and look pretty sleek as well – nothing overly flashy or out of place. They are made from an anti-bacterial fabric which has held up as expected through numerous runs and washes. There is an attached compression shorts that fit down further on the leg than I anticipated. It was almost to the knee – which I appreciated – but some others may not wish for that much coverage.

The main feature in these is the addition of the cell phone pocket within the compression short. This keep the phone dry on those unavoidable rainy Run Oregon days, yet still leaves the phone accessible via the outer pocket. There are actually three parts to this feature: the outer pocket on the exterior shorts, the inner holding pocket on the compression part, and the addition of a middle flap that keeps the two seperated via a small button. 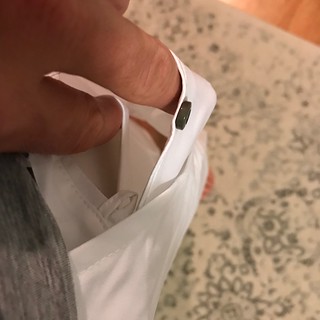 Inner, middle, and outer parts of the cell phone pocket

This middle section appears to act as a secondary protection between the two pockets, yet makes access simple enough. I am not sure that this flap is necessary for most runs – as the phone is held quite tight against the leg – but is a nice addition that definitely has value when the rain hits hard.

I really like these shorts. Sometimes adding “new” stuff to running shorts can make it so that the design of the most important parts of the shorts – the comfort and function – becomes lost. I think TrueRevo has done a great job at not losing sight of that and have created a very nice pair of shorts with a new feature that gets the job done.

Just a reminder that their Kickstarter has already reached its goal, so pledge before December 4, 2017 to land  a pair of cool and functional running shorts for less than retail.