I’ve wanted to run Bridge of the Goddess for years. Unfortunately, it always falls on the same weekend as the Gorgeous Relay, which is a tradition for me. They are on different days, one on Saturday and the other on Sunday, but when you have a teammate depending on you, I’ve opted to save my legs for the relay. This year that tradition had a hiccup with nagging injuries for my long-time running partner (combined with the cancellation due to the summer fires in the Gorge). It was bittersweet – I was disappointed to miss the relay, but was happy to look into Bridge of the Goddess right away.

I’ve wanted to run this one for a number of reasons. First, I love events targeted towards women. There’s just a different dynamic that’s hard to explain. Cascade Locks and the Gorge are the perfect backdrop for a run, and made even better to actually start the race on the Bridge of the Gods. Finally, any race organized by Run with Paula Events is guaranteed to be fun. No details are overlooked and there’s a reason she has such a solid reputation in the running community. 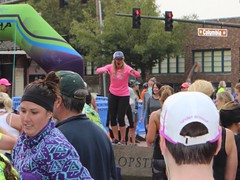 As soon as the Eagle Crest fire made headlines, organizers noted that they were monitoring the situation and would keep everyone updated. Like everyone in the Pacific Northwest, I was heartsick to see the loss in the Gorge. It was announced that the run would be moved to Vancouver, Washington, a necessary step, but given the fact that I had my heart set on the Gorge and the course, it just didn’t have the same feeling initially.

Race morning I was expecting to see some long faces, disappointed to miss out on the Gorge. Yet, I didn’t see a one. Instead, there were excited ladies all around me, thrilled that it wasn’t cancelled and they still got to run on a great weekend. So many races have been canceled lately as a result of the fires, and this seemed to be more rallying together than I anticipated. I ran into a girlfriend who has run it every year since it started and wasn’t going to let a little course change ruin things. There were ladies dressed as Wonder Woman and Greek Goddesses, but my favorite was ‘Ruth Bader Ginsberg’ (I really hope she won the costume contest). 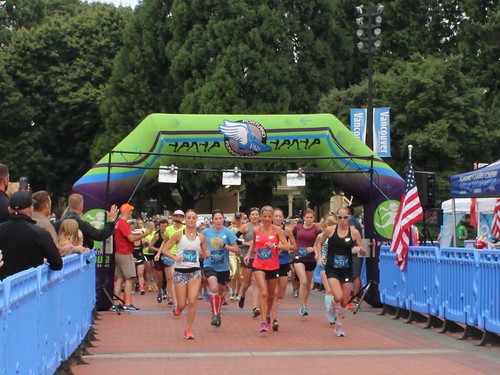 Besides the change in course, there was no other indication of the rather last minute venue switch. I skipped out on the warm up since I was catching up with a girlfriend I haven’t seen in years, but ladies huddled together for some dynamic stretching with a Zumba-inpsired number. It almost seemed as if this had been planned in Vancouver all along, with how well it was put together.

We had perfect running weather – overcast and a comfortable temperature as we left downtown Vancouver towards the Columbia River. Running a quick section next to the river and then up to the Fort Vancouver area. While it wasn’t technically the same course as the Girlfirends’ Run for a Cure Half Marathon, it was the same area with a different configuration, which was a fun change.

As expected, their aid stations were perfectly placed and there were plenty of volunteers along the course. I love that it had a couple out and back sections, so you could see more of the runners in front and behind you. I appreciate the mile markers, but somehow missed Mile 11. I know it was out there, but I must have run right by it and seeing that Mile 12 sign was such a pleasant surprise. 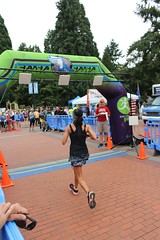 It wasn’t the beautiful course in the Gorge and we didn’t get to start on the iconic Bridge of the Gods, but it was a fun event nonetheless. Kudos to Run with Paula Events for keeping the run intact and the City of Vancouver for allowing us ladies to take over. The organizers and city impressed me, but I was most impressed with the ladies out there. They didn’t let the ‘Year of the Fire’ dampen their spirits in the least. There wasn’t any grumbling or complaining, and their enthusiasm was infectious. I was honored to be running among so many Goddesses, ladies just excited to be running together.

I didn’t hang around for the burgers and beer at the finish line, but grabbed some water and my necklace and headed out. Not quite the run I was hoping to do in the Gorge, but definitely a successful event and I’m grateful they made it happen. For a couple of hours, it took our minds off the devastation in the Gorge and allowed us to see another pretty area in the Pacific Northwest. I have to run it again, to actually start on the Bridge of the Gods, but I’m glad I got to run it regardless of the venue. It allowed me to see the true heart behind the run and the drive of the women around me and reminded me that an event is so much more than just a pretty course.