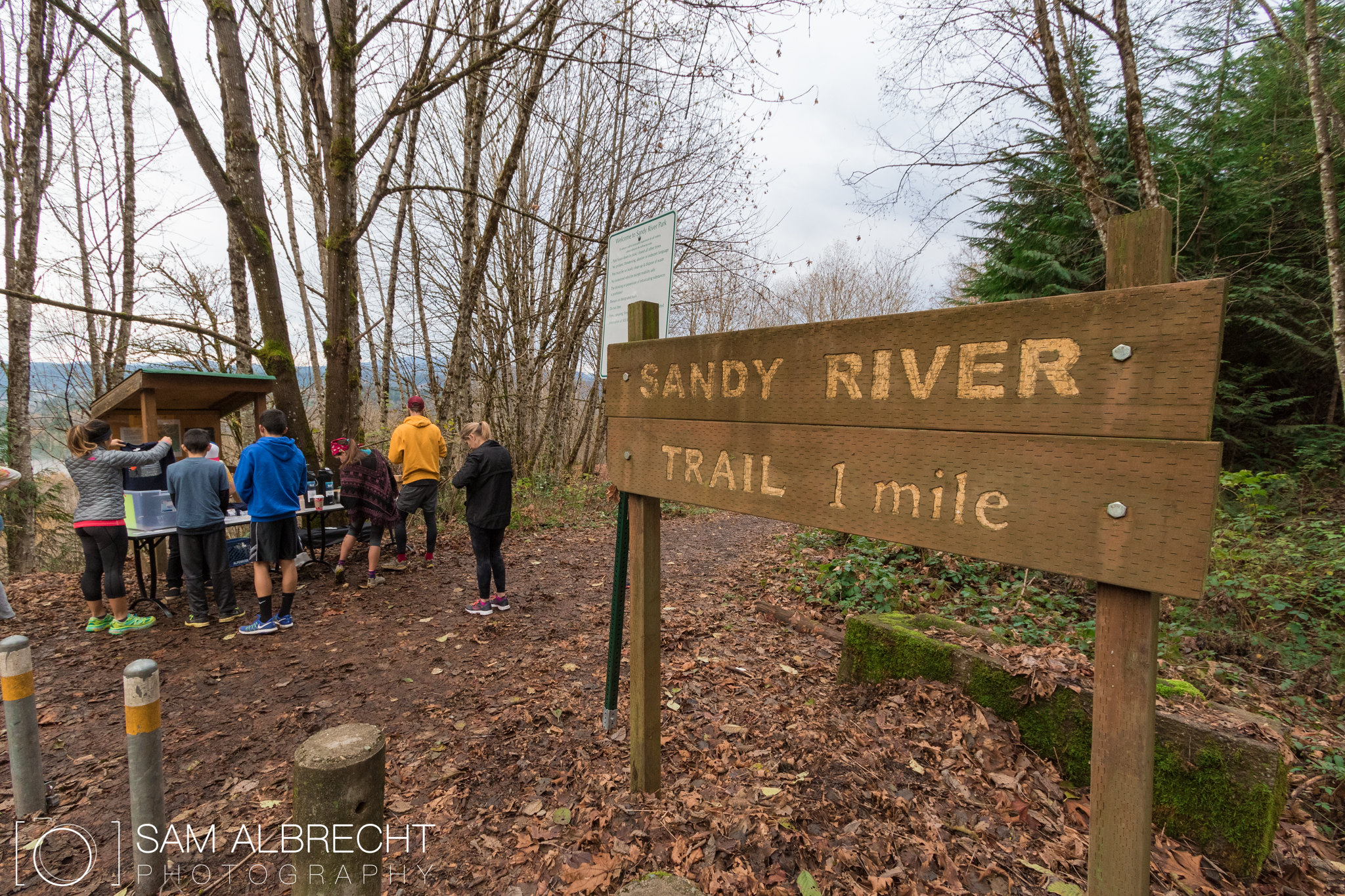 Thirty-five runners gathered at the end of SE Marcy Street in Sandy, Oregon on Saturday, November 26 for the first annual Sandy River Run. With a generous serving of Turkey Trots and Thanksgiving-themed runs to choose from the days just prior, each runner who stood in the chilled early morning at the top of the Sandy River Trail were looking for something a bit more hearty to fill their plates. Advertised as 100% trail with six hundred feet of elevation, the 5-kilometer trail run was the best choice to satiate their adventurous appetites.

“The trail is beautiful. It’s steep. And it’s extra muddy. Be careful, or else you’ll fall on your tookus,” race director Anthony Bucci announced lightheartedly to everyone. Known to some as The Beerded Runner, Bucci has a love for trail running and the outdoors, and organized the Sandy River Run as the first event in his developing racing company. “Trail running is my passion, and I’m really appreciative that you all came out to run these gorgeous trails in my hometown this morning.”

After explaining course markings, and offering up a quick prayer over the participants, Bucci kicked off the start of the race and the lead runners took off down the steep doubletrack descent like they were running a 400 meter track event.

I tried my best to hang on, knowing descents are my strength, and sat about six runners back when we made the first turn onto the Jim Slagel Loop Trail. The trail pared down quickly into what most trail runners dream of: a flowy, scenic, runnable ribbon of singletrack dirt lacing through the forest. I’d catch an occasional glimpse of the closest runner in front of me as we started to drop towards the swift Sandy River, and felt assured that I was following the course markings correctly.

The heavy rains over the holiday weekend made the steep, muddy descent down to the river’s edge a bit unforgiving, but the view at the turnaround was spectacular. Some runner’s reached down and touched the cool water before turning around and beginning the climb back up towards the Jim Slagel Loop Trail. A couple of stronger runners passed me on the climb while I was busy catching my breath, but when I got back to the junction of the two trails they were out of sight and I was a bit confused which way to go.

Two women appeared on the trail to my right, and were walking back toward where I had just ascended. This doubled my quandary as I was certain they hadn’t been in front of me. Another runner, who I knew had been in front of me appeared from the same spot. “Do we go this way?” I asked pointing up the hillside. “Ya, I think you’ll go up this twice,” he replied. “Seems like everyone’s a little mixed up.”

I began the climb up the muddy double track and watched that runner turn the bend and disappear out of sight. I resigned my care at this point, not worrying if I was on the correct route or not. I would do the two loops, finish the race, and head home happy to have played in the woods for a little that day. For a shorter trail race, this event had everything in the mix: a fast downhill start, the flowy single track, and now this long climb; runnable, but definitely one to suck the wind from your lungs.

I kept a slow, methodical cadence up the hill until I saw the course photographer who directed me to make a right turn for the second loop.

The race finished with the same long grind back up to the finish line where participants stood, breathing heavy, holding up their wrists to one another’s faces and comparing distances. My watch logged a meager 2.6 miles, which I figured was enough to eat one of the last free donuts provided by Joe’s Donuts, a generous sponsor of the event along with Mountain Moka of Oregon. I thanked Bucci for hosting the event, walked to my car, and drove home.

What the Sandy River Run fell short with in course markings and direction, it abundantly made up for with its beautiful, diverse venue, local proximity, and a close knitted, grass-roots community feel that gave back a generous portion of race proceeds to the City of Sandy Parks Department. As a first time Race Director, Bucci delivered what looks to be an ongoing successful trail event for runners of all capabilities and backgrounds to consider. Find Bucci on Twitter (@beerdedrunner) and Instagram (@thebeerdedrunner), as well as the Sandy River Run on Facebook for more information on upcoming events and activities near the Gateway to Mt. Hood: Sandy, Oregon.