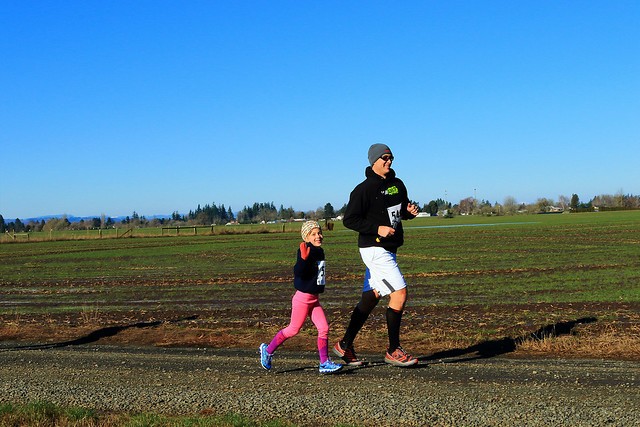 The 7th annual New Year's Day Hangover Run by Run Wild Adventures is coming back to Salem and I couldn't be more excited to continue this traditional running. 2017 will be my 5th running of this event, with last year being my oldest daughter's first race. Her excitement from this event led her to completing 4 more throughout the year, and she's already ready for the race that started it all. My middle daughter (almost 5) will be joining in her sister's footsteps this year as well!

Despite a name like “Hangover Run”, this race really is a great event for the entire family. The race field is small (about 150), the course is straightforward, and the atmosphere is down to earth and low-key. The event is professionally timed and there is a post-race spread of bread, soup, and beer. The 3k offers a great course for runners of all ages, shapes and sizes. It starts off on packed gravel/dirt trail, before giving way to dirt trails, grass (sometimes frozen), and dirt. It’s a fun and ever changing 1.86 mile course.

The 5k is brand new this year! It follows the same route, but completes a second loop. The addition of this length actually increases the race options to three distances. As the 3k and 5k start at different times, runners can choose a 3k or 5k, or run both to complete an 8k. And, if you include the Beer Mile, you can get a total of 6 miles (1 fueled by beer) in by the end of the day.

What is a Beer Mile, you say? Well…

A Beer Mile is a drinking game combining running and speed drinking. This event takes place on a 1/4 mile flat cross country course. The race begins at the starting line with the consumption of a standard 12oz beer, followed by a full lap around the course. The second lap continues in a similar manner; another 12oz beer is consumed before commencing the running of the second lap. This process is repeated for the next two laps. Following the completion of the fourth running lap (and four beers), a competitor has finished the race. Competitors who vomit before they finish the race must complete one penalty lap at the end of the race (immediately after the completion of their 4th lap). Note: Not required to drink an additional beer on the penalty lap. Also vomiting more than once during the race still requires only one penalty lap at the end.

Fortunately, the beer is provided by local brewery Seven Brides Brewing, so at least you aren’t needing to run with disgusting macro beers in your belly.

Check this one out for 2017 and kick your year off right. Say hi if you see us out there!