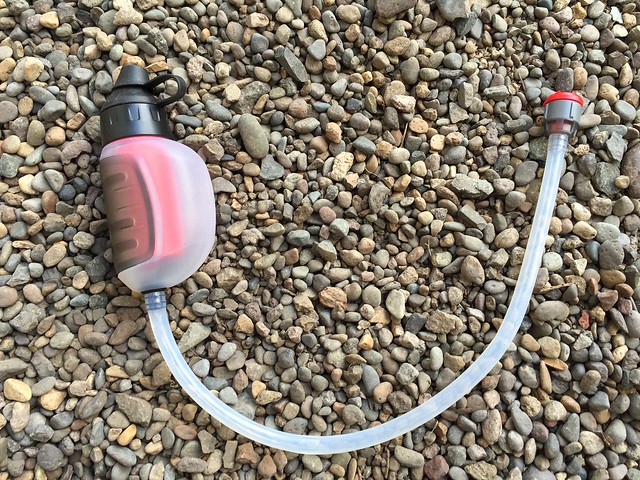 Sometimes we just want to run. We don't want to have to worry about packing all of our running stuff up and make sure we have enough pockets or vests for fuel. Obviously it's a good idea to do so, but sometimes simpler is just better - let's hit the trails and get "lost" for a bit. One really great way to simplify your gear, while still ensuring that you won't run out of water, is by bringing along the MSR Trailshot Microfilter, a new product to be released at the beginning of 2017.

It’s small and simple – hold it in your hand, pull up to a body of water, place the hose in, and one-hand squeeze the Trailshot to drink straight from the top (or use to fill bottles you may have). It’s extremely light (5 ounces) and not cumbersome. It’s something small enough to run with it in your hand or keep stowed away in a pack, or even a pocket, until it’s needed.

I tried this straight to mouth as well as into a bottle. I found it took just over a minute to fill approximately a liter (as they claimed it would) – really quite fast enough to allow me to load up and hydrate without spending too much time. It also doesn’t require even a full body of water, as the small tube did an admirable job for even some smaller water spots.

According to the info from MSR, the filter uses “hollow-fiber technology” that will effectively remove common backcountry bacteria and other nasties. I wouldn’t recommend this if you are going to need significant protection (i.e. filtering potentially virus-laden water in third world countries), but for what we have here in the Pacific Northwest, you should be good. I ended up getting this clogged only a handful of times, but the end result of a few shakes yielded it clearing itself up.

This seems like a PERFECT addition to any of you backpackers, ultrarunners, or just someone who wants to go run the backcountry with one less thing to weigh you down and worry about. Be on the lookout for it in 2017.

Please note that the TrailShot we received is not the final design. MSR has decided to make a design change on the drink interface. Currently, the cap doesn’t snap onto the spout as easily as they would like. The spout is in the process of being altered so that the cap closure is improved. The filter portion works well and will not not be affected by this update.

With the BeFree Filter, you no longer have to worry about where your next drink will come from. Just fill up the flask and let the EZ-Clean Membrane do the work. Gently squeeze the flask for instant refreshment. Maintain the EZ-Clean Membrane quickly and easily for longer life and more enjoyment. Simply fill the flask with water, attach the cover and shake free the debris. Or, remove the filter from the flask and swish in any lake, river or stream. And when you’re ready to “hit the road,” the collapsible flask packs small to fit into tight spaces. Just Smash, Stash and Go! Worry less, Discover more, BeFree.

Impressions: Keeping with the theme of lightweight and space-saving hydration products, Katadyn has a brand-new collapsible .6L liter flask that would make a backcountry activist squeal with delight. The BeFree weighs just over 2 ounces and, when not filled, can roll up to any pocket. It really is super small  It comes with a “integrated .01 micron microfilter that protects users against harmful organizations like bacteria and cysts”.

There is no hand pump in the BeFree – runners would just shake or swish the membrane in the water and you are done. The BeFree also claims to fill a liter in 60 seconds, and I found this to be the case as well. As it is said to last for at least 1000 liters of filtering, this $40 investment will last through more than enough camping trips, hiking excursions, and ultra-running races.

If you have a Hydrapak bottle, know that the BeFree filter is compatible with the 43mm bottles – allowing for easy transferring between the two, for only one price.

To enter the giveway, head to our Rafflecopter giveaway! Winner will be selected on October 5th!