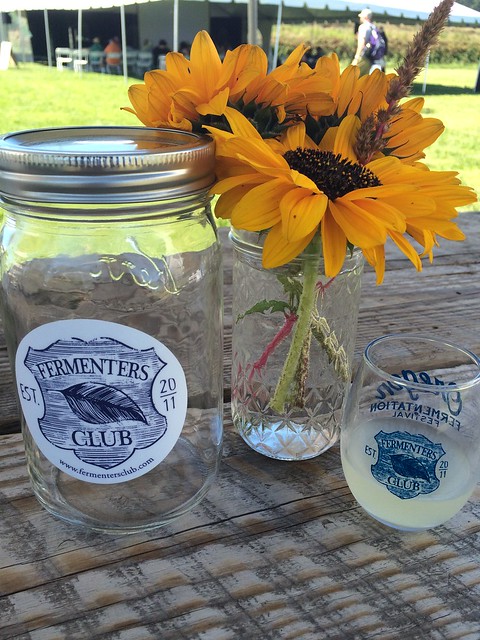 I’ve known for years that probiotics are important for a healthy digestive system, but have limited my sources to pretty much kefir and tempeh. My probiotic world blew up big time at the Second Annual Oregon Fermentation Festival on Saturday, September 10th on Sauvie Island. Held at Kruger’s Farm, it’s a relatively quick jaunt from Portland and the weather couldn’t have been better. The timing was perfect with summer winding down and just before the craziness of fall with pumpkin patches and corn mazes. Not sure how crowded it would be, my girlfriend and I decided to get there early. Parking was easy, there was barely a line to get in and all of the vendors were perky and excited.

Demonstrations spread throughout the day

The 150-acre farm was a perfect location since there was a lot to see and do:

We went all out and opted for the Ambrosia Garden, more on that later. Entering the festival, we fully intended on making the rounds one time and return to our favorite booths after the initial sweep. Our plan didn’t actually come to fruition as we spent a lot more time at each tent than we anticipated. The first one that caught my eye was Nature Nate’s Popped Sorghum. I’ve seen it at New Seasons, but have never been brave enough to test it out. Nature Nate was there with samples in every flavor and we took him up on it. We also took him up on giving us a plastic bag for our purchases since I, as usual, left mine in the car. Definite faux pas packing plastic at the Fermentation Festival, but I will remember my bag next year.

There were all sorts of sauerkrauts, kimchi and kombucha to sample. Once I stepped out of my comfort zone, I discovered a whole new world of foods. Sauerkraut in all sorts of flavors, kimchi in a variety of heat options and a huge array of komubucha. One of my favorite booths was a young entrepreneur from Portland. He makes Aidan’s Atomic Pickles and, while I loved his little business, I don’t do heat, let alone atomic level heat. He talked me into a batch low on the heat factor scale and I discovered I’m an even bigger wimp than I thought. I still loved his business and was impressed a young man would choose to spend his Saturday at the festival versus behind a screen. I didn’t see traditional kefir, but there was a water kefir that was delicious and refreshing and I’m hoping to see Rawk Star Creations in more stores.

Fermentation Club goodies were available to purchase and you can’t ever have too many trucker hats.

Speaking of refreshing, back to the Ambrosia Garden for the over 21 crowd. Ciders , beer and mead were included and since I’m not a beer drinker, I sampled the ciders and mead. Once again, I braved flavors I wouldn’t normally order, including a chipotle mead and a pumpkin spice cider. The chipotle mead wasn’t my favorite, but the pumpkin spice cider was the best. I’m not into the spiced drinks that come around in the fall, but this one had just a hint of pumpkin spices and it worked, enough that I will be looking for it at New Seasons, alongside my other 2 Town Ciderhouse favorite.

There were presentations scheduled for the day and an area with live music and miscellaneous performers. We didn’t take advantage of any seminars or dance, we were too consumed with the various vendors and making our own jar of pickles. For anyone who would say there isn’t enough to do at the Oregon Fermentation Festival, I would adamantly disagree. We spent several hours there and definitely needed more time. I’ll be back next year and will pack a bag for my goodies, pack a well-balanced lunch and make sure I have a little more time.