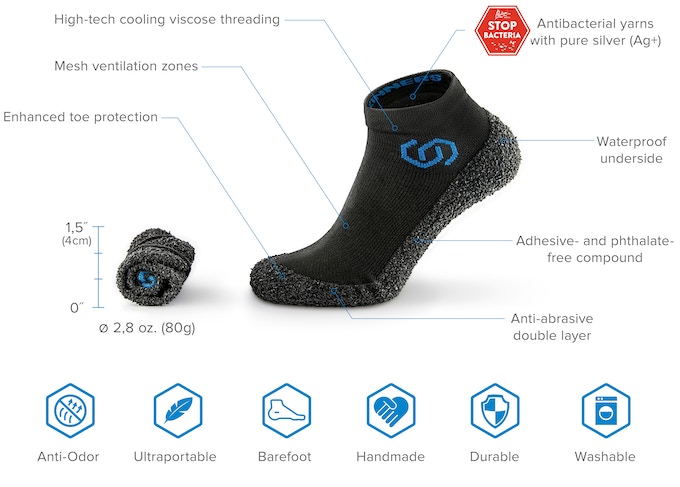 Product: Skinners Footwear Location: Chicago, IL (made in Europe) End Date: Thursday, July 21st Pledge Goal: $10,000 (already funded at over $480,000) Running shoes are great (unless you're into that barefoot running craze), but let's face it, after a long run, shoes of any kind can feel cramped and restrictive for feet that just want to swell up. Skinners Footwear is a hybrid sock/shoe in case you can't walk around barefoot or in socks. First, here's how the company describes its product:

To enhance our performance, move faster and go farther, man has invented a lot of special kinds of footwear: rollerblades, cycling shoes, cleats, climbing shoes, heavy-duty hiking boots etc. But all too often this footwear is so specialized that we are forced to sacrifice on comfort, convenience, and even safety. To overcome the limits, where footwear starts to be a burden rather than a benefit, we developed Skinners – ultraportable footwear for every adventure.

Each Skinner is a little bigger than a no-show tube sock, and when worn, comes up pretty low on the ankle. The top half of the Skinner feels like a running sock, while the bottom is still soft and flexible, but sturdier. It’s covered with what feels like a coarse rubbery crust (almost like barnacles on a ship). This bottom surface is waterproof and also provides some measure of gripping/traction. It comes with a convenient carrying pouch, as well.

I in fact happened to have finished a long run when I received the sample product to review, so I tried it on immediately upon opening the package. They slip on easily and feel very comfortable, more or less like wearing socks. Supposedly you can run in them although I don’t think I’d recommend that unless you are already used to minimalist footwear or barefoot running. The only very minor drawback that I found was that if you tend to shuffle your feet, as I do, on occasion the gripping surface on the bottom (which rises up over the toe area) can snag on carpeting. Otherwise, these are great for pampering your feet in a setting where you don’t want to touch the ground directly, like say in a hotel room (if you’re a germophobe).