On Saturday, April 9, I got up at 7 a.m. and soon headed out to nearby Lake Oswego for Double Dog Dare U Event's Double Five Challenge. I had signed up for the full challenge, which was to run the 5 mile race and then follow up immediately with the 5K, but I still had a bit of lingering Achilles tendon soreness, so I was a little skeptical of my ability to finish both distances without retarding the healing process. Fortunately for me, race director Pattric Langley was completely understanding and would have let me abandon the double challenge if I didn't feel up to it. With that in my back pocket, I arrived at George Rogers Park about 15 minutes ahead of race time. (Yes, as usual, I cut it kind of close....) I drove around the upper part of the park once in an effort to find the best parking space and ended up a short hill above the race's staging area. I hadn't had a chance to make it to the pre-race packet pick-up, but there were enough race volunteers that there was no wait. I received my race bib (#58) and race shirt adorned with the race logo. It was on the cold side of mild, and I was dressed only in shorts and a Run Oregon tech shirt. I was therefore mildly tempted to put the race shirt on as a second layer (but I don't do that); instead, I jogged back to my vehicle to deposit the shirt. About a minute before race time, Pattric Langley announced that 5 mile racers (including those of us doing the Double Five) should line up behind the start line, as we were about to start. I positioned myself somewhere near the middle of the group of about 60, and then the race started. The route began on a closed off parking lot with a wide lane, but we soon reached a wooden foot bridge that took us to a short trail, then another bridge, and more along the William Stafford Pathway, and then we were on Old River Road. To left was the Willamette River. We weren’t exactly on the shoreline, but it was easily visible through the trees. For about a mile there was a slow, steady rise that wasn’t really noticeable – until the return, when I found myself thinking first, “wow, I had to go up that!” followed by, “oh no, I have to go back up that for the 5K!!”

It was a quiet morning, and the air was still. I stopped feeling cold; in fact, it was about perfect running temperature once I had gotten going. Because the race course was on an open path, there were other people – local residents, I’m guessing – who were walking, running, or cycling. On the river were several crew teams. All in all, it was pretty close to an ideal Oregon image to make big city people jealous. 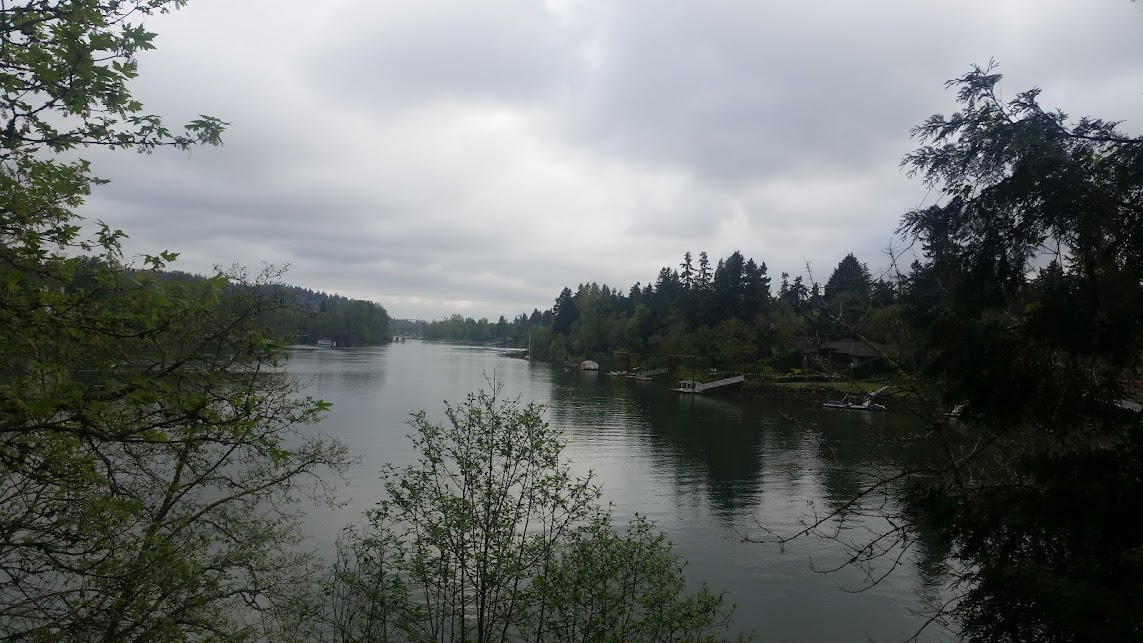 The race course was identified by bright yellow arrows, with “WRONG WAY” signs posted along the incorrect forks as an extra precaution. At a few key spots there were live flaggers. Although I found myself running more or less alone for about a mile stretch because others were either far ahead of me or behind me, I never felt lost.

We turned off Old River Road a little less than two miles into the race and headed into a residential neighborhood for a loop. The water station was located around here. I thought about passing it and getting something on the way back, but then I dimly remembered something about a loop in the middle of the 5 mile course…. Good thing I had that vague notion!

At about the halfway point of the 5 mile race, there was a short steep hill. Someone had helpfully marked in chalk the observation “a hill?” I initially misread it as “hell?”

After this loop connected back to the main race course, I was soon merged with 5K runners heading back toward the finish. Needless to say, given my three months of running lightly (about a third to not quite half of my usual mileage), I was going to PR only because I haven’t run a 5 mile race before. Still, I managed to pick up the pace in the second half of the 5 miler, helped by the fact that much of it was a slow, steady decrease in altitude.

Leaving Old River Road for the trail path gave me an extra boost of energy. I crossed the two foot bridges and made it to the finish line.

Except I wasn’t finished, since I had the other part of the challenge left to complete. I did stop for about 30 seconds at the water table before heading back out on the course.

The 5K route was the first 1.55 miles of the 5 mile route – i.e., about a track lap shy of the water station. I knew what to expect, but I was taking it easy at this point, and not entirely by choice. This was my longest run of any kind, race or training, this year due to ramping my mileage up slowly, so obviously “racing” was only going to last so long. But I managed to close with a bit of a kick, and my Achilles tendon didn’t seem any worse for wear afterward. As I crossed the finish line, I heard the race announcer call out my name, time, and pace. Another race volunteer handed me the Double Five Challenge finisher’s medal.

After finishing the race, I checked the raffle board and saw that bib #59(!) was a winner. D’oh! If only I’d procrastinated signing up by … a day? The results kiosk was there as well. I entered my bib number and saw that I was #7 overall in the Double Five Challenge, and #3 in my age/gender group. A race volunteer congratulated me and handed me a third place ribbon. That’s pretty cool, I thought. When I checked the online results, I saw that my age/gender group had a grand total of … three finishers. Bubble burst.

Review: This was my first Double Dog Dare U Event, and I was impressed with the organization of the event. The pre-race email provided clear and concise instructions about race day, including links to maps of parking locations. The course was well-designed and very scenic, and a delight to run. Huber Timing provided timing services, including nifty email and text messages upon completion of each leg of the Double Five Challenge. With a grand total of 39 runners in the Double Five, 22 in the 5 mile race, and 21 in the 5K, it was a relatively small and intimate event, but I think it could easily accommodate twice as many racers or more. I had a nice time and enjoyed this race a lot.

Results: Full results for the Double Five, 5 mile, and 5K (including separate split times for those who ran both distances) can be found here. Each individual runner’s  name can be clicked to bring up an individual page with more stats and a printable finisher’s certificate.

Photos: Lots of photos can be found here.

The next Double Dog Dare U Event is the Youngberg Hill Half Marathon on May 15.