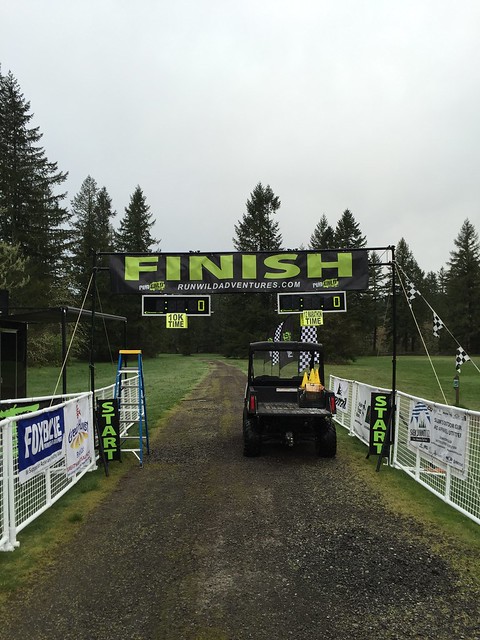 I don’t get out to do as much trail running as I would like. There are some great trails within a dozen miles of my house, and even more as the radius expands. But with my schedule (work, family, blogging), I try to spend as much time on the roads as I can without committing driving time into my training. Luckily for me, Run Wild Adventures, the Mid-Willamette Valley trail racing authority, puts on enough nearby trail races throughout the Winter and Spring to keep me happy. The 2nd annual Vortex Half Marathon and 10k was held at Milo McIver Park in Estacada – a (surprisingly) large State park with miles upon miles of trails ripe for the tackling. I had been to Milo McIver park for a Muddy Buddy race in 2011 – before I was even involved with Run Oregon  - and remembered how challenging it was. That was, however, when I was extremely out of shape and not prepared for much of any physical exertion. I had a flashback to that event upon entering the park, and my stomach started churning a little more than usual due to this flashback.

I don’t even know where to start when it comes to running in Run Wild Adventures races – they are all just so well done. The Vortex Half completed my lifelong accumulation of participating in all RWA events – and they just continue to get better. From the simplicity of pre-race (pick-up, bag drop) through the after-party – they just seem to have it down. It’s motivating and fun, merging a small-race comradery with big-race excitement. Over the 13 miles of criss-crossing and distant loops, the trails were marked so amazingly well, I feel it would have been impossible to veer off track. Flour markings and flags were strategically and perfectly placed and aid stations were well-spaced.

//embedr.flickr.com/assets/client-code.jsPrior to this event, I had participated in 39 half marathons, but never one on trail. I had done the 2015 Peterson Ridge Rumble 20-miler, but I still wasn’t sure how I was going to feel. The elevation chart looked menacing, but more lenient than the Silver Falls Half Marathon. The first half mile or so on a relatively wide gravel path allowed runners to thin out a bit before hitting some smaller trails. There is a short and steep mini climb near mile 1, and then some up and downs over the next mile and a half or so. Things leveled out for a bit, but that didn’t mean we could be careless, as there was mud to traverse even when the climbs weren’t much.

I am not a professional trail runner by any means, but I thought that the conditions were almost perfect for trail running. There was no rain, but there were numerous spots along the whole course where there was a good amount of mud. However, it was maneuverable and there was no need to wade through puddles of water. It was just a perfect trail race in that sense.

There were a few more short and sweet climbs around mile 4, but things were definitely manageable. There was a longer, more gradual incline between miles 6.5 before maxing out near mile 9, but there wasn’t anything all that terrifying or breathtaking (besides some views). The final 3 miles were essentially downhill, which led to me being able to catch my breath and feel like I was cruising to the finish.

For my first trail half, I felt ridiculously good. Part of that was me being in good shape and (for once) not overexerting myself at the start, but most of it was just being happy to take in all the WA provided. I don’t want to echo my first paragraph, but the entirety of the experience – coupled with a few great views and fantastic weather – really made for a great Saturday. Can’t wait to come back next year.