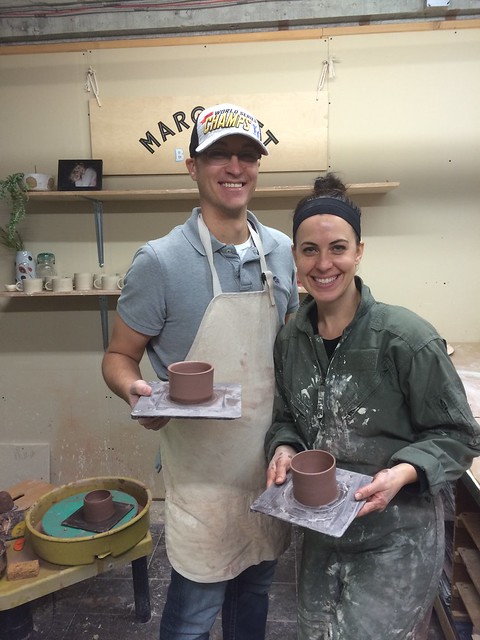 Run Oregon loves running - that's no surprise. But we also love the Pacific Northwest and all that it has to offer. Running is a part of us, but it does not fully define us. In our new "Make a Day of It" feature, we aim to showcase some great local non-running events and highlight where to run and how to make the most of your experience! The next installment of this series is Margaret and Beau ceramics classes! First the running: Margaret and Beau, which is one young lady's artistic business dream, is within Shop People, a shared workspace in SE Portland. It is on Oak Street, right between SE Grand and MLK. Inner SE isn't the most idyllic location for runs, but it is not impossible (if you are OK with street crossings). We did our session following the Shamrock Run, so we didn't need to run before or after. However, on non-race days I would recommend heading either a few blocks north or south before going towards the river and connecting with the Eastbank Esplanade. From there, you can make your run as long or as short as you want - either around the Waterfront or up the Springwater. I would also recommend checking out a couple of locations to complete your SE trip:

Apparently, the theme for a couple’s 8 year anniversary is pottery. Being a romantic at heart (or something like that), I decided to get literal with the theme, and instead of buying her a set of pots – and probably screwing it up – I decided we would make our own.

There are a variety of pottery classes in Portland, but the majority of them seem to be either 1) painting already made items or 2) community classes – neither of which is what I was going for. As I mentioned before, Margaret and Beau, is Rachael Metzger’s ceramics studio within Shop People, a shared workspace in SE Portland. Shop People is one of the coolest, and most Portland places I have ever been in. The space opens up down an alley, but the inside is giant, with areas for wood working, welding, painting, and every sort of art under the sun.

Rachael has her own cozy space, but it’s definitely big enough to get the job done. My wife and I took turns listening to technique from Rachael as she readied our clay and she took us step-by-step through the process while she whipped out a perfect vase in no time flat. My wife drew the short straw and stepped up to the wheel first. Of course she was a natural, which made me even more nervous about my ridiculously bad artistic abilities. However, Rachael put me completely at ease as I took my turn. She was right alongside of me, gently reminding and guiding me along – all without just taking over and doing it. The next thing I knew, my mound of clay actually started doing what I was intending for it to do and over the next couple dozen minutes, it ended up being a functional item. Anyone that can make an artist out of me deserves all the praise in the world.

My wife and I each took a few more turns at the wheel, moving quicker than we did the first go-around and creating a few more solid pieces in the process. After we left, Rachael took on the responsibility of firing, coloring, and shipping the pieces – all of which for a nominal fee.

Keep in mind that since this is a shared space, other artists may be around doing their own work. So, while lessons may be private – don’t expect complete isolation. Also dress accordingly, as pottery is not meant to be clean!

I couldn’t believe how great of a time I had, despite my artistic limitations. I strongly recommend you check out something a little different and a lot awesome. Make a day of it.