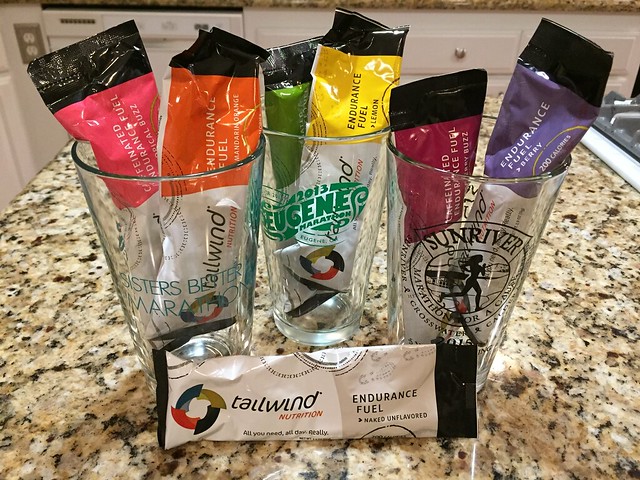 Price: 7-pack for $16 Description: The easiest way to wrap your head around Tailwind is to think of the 3 components of successful fueling: calories + electrolytes + water. Moderate exercise burns 500+ calories/hr and race pace can exceed 1000 calories/hr, but most people can process and absorb only 200-300 calories/hr during exercise. Given the calorie deficit, the goal of fueling is to make your stored energy (stored as glycogen) last as long as possible through efficient calorie uptake supplemented by energy converted from fat stores, while maintaining electrolyte and hydration balance.
Tailwind‘s dextrose (glucose) and sucrose (glucose + fructose) fuel matches what the body absorbs, so it enters your bloodstream quickly without challenging the digestive system. Active transport mechanisms in the small intestine act as pumps specifically for glucose and fructose molecules, pumping them into the bloodstream. The transport mechanisms require sodium to function, and the pumping action actually moves more water into the bloodstream than if you drink plain water alone. Tailwind‘s fuel is combined with electrolytes and water in the proper ratios, which maximizes the absorption rate of each to maintain hydration and electrolyte balance. Once absorbed, Tailwind‘s fuel can be burned immediately, directly offsetting calories that would otherwise be drawn from glycogen stores. Tailwind is designed to be sipped regularly throughout exercise to keep your stomach and digestive tract happy while providing steady energy.

Your hydration pack will love Tailwind too. Tailwind dissolves completely on contact with water and cleans up with a quick rinse. No film, no lingering aftertaste, no gooey mess.

Not everyone is a fan of energy gels. I know that my wife, new-ish to the running scene pretty much gags when even thinking about trying one. She has a sensitive stomach and a sensitive gag reflex – a combination that makes some refueling (literally) hard to swallow. Tailwind aims to combine calories and necessary electrolytes, and keep you hydrated at the same time. The ingredients are natural and non-GMO, and the taste is solid. Please keep in mind that taste between people is very subjective and you should always sample some stuff before you take my complete word for it.

When I put the first packet in my HydroFlask, I was a little concerned it was going to be too strong. I mean, it smelled initially like a punch in the face – and I wasn’t sure if I was going to like it. However, after a hearty shake (I found I had to shake longer than you would anticipate to avoid getting crystals in that first swig), the taste was actually a lot lighter than I thought it was going to be. This was pretty consistent with all of the flavors. My favorite so far has been lemon, though the “Naked” was surprisingly enjoyed. It’s not completely flavorless, but just a small amount of sweetness to be good.

I think this would be really solid for those who run marathons, ultras, or other long distances on a semi-regular basis. I know many ultra runners have challenges with bonking late in their runs (for obvious reasons), and some of the complaints is that they just can’t stomach solid foods, or even gels or gummies for that matter. Tailwind would do the trick, and other reports out there state that it keeps the stomach settled while providing the energy (I also experienced no stomach issues).

The packages are easy to open, and would be a cinch to pull out on a run and toss in a bladder or water bottle. For those of us who don’t need as much water during a shorter race, I like how they show you exactly where to pinch off if you only want a half packet.

There are a lot of great reasons to try Tailwind, including the science behind the creation. I highly recommend you read about it to see if it fits for you. Follow them on Facebook as well.

Flavors (in most products):

Price: Sample packs to try all kinds runs around $40. Depending on the product, most 12-count boxes will run around $15-30 (Amazon).

Description: GLUKOS founder Mark Jensen, a former collegiate runner and Ironman competitor, realized there was a gap in the energy product market.This led him to extensive research and development to find the optimum source of energy that was both healthy and effective for athletes, similar to an oral IV. GLUKOS is similar to an IV because it contains the same basic ingredients, including water, glucose and electrolytes like sodium. Glucose is the only fuel the human body can use to produce natural energy. Unlike other energy products on the market, GLUKOS does not contain High Fructose Corn Syrup, which actually creates lactic acid, and triglycerides in the muscles that hurt performance and recovery, caffeine that artificially increases the heart rate and causes dehydration, and artificial sweetener.

They are also partnered with the Rock N’ Roll Race Series.

I’m always a guy who likes to shake up my in-race hydration. I don’t dislike anything and am ready and willing to try all comers, be it an energy gel, gummy, or anything else. I have an iron stomach in that respect. Overall, I was pleasantly surprised with the stuff in Glukos’ arsenal.

As for the energy gained, I generally saw the same mild boosts that I get from similar products – but was happy to feel that I was using a little more natural approach to the “genre”. I did note that there is Stevia in a few products. I’m not 100% sure the final determination (it is FDA approved), but some people have strong feelings against it. Just an FYI is all – make your own decisions.

Description: Nuun tablets are electrolyte tables that you can add to a bottle or glass of water to turn it into a flavorful, low-calorie electrolyte drink.  The tablets come in four different formulations (for different life situations) and come in a variety of flavors.

The original Nuun tablets have been reformulated and renamed “Nuun Active“. They are caffeine free, are naturally flavored and colored, contain a balance of potassium, magnesium, and sodium, and are sweetened with monk fruit extract, Stevia leaf, and a small amount of dextrose for better absorption of nutrients. Each tablet is intended to be dissolved in 16oz of water and has 10 calories. They are packaged in colorful bottles with white lid and are available in nine flavors.

Eleven flavors of the old formulation are on sale on the Nuun website as well (as of 3/4/2016).

I was first introduced to Nuun several years ago while running Hood to Coast. During a relay, all “don’t do things you haven’t tried before,” rules go out the window, so I tried it – and was very pleasantly surprised. The flavors are nice and the sweetness not overpowering. Since it is extremely low-calorie (around 10 calories per tablet), I didn’t feel like I was over-indulging with sugar. The original formula used sorbitol and acesulfame potassium as sweetener (which has a mild flavor to me, but can trigger GI discomfort in some people), and the reformulated tablets are sweetened by monk fruit extract, stevia leaf, and dextrose.

I use Nuun year-round in all situations, whether exercise related or not. When my husband went to Central America on a mission trip, our pharmacists okayed Nuun instead of the electrolyte tablets that the pharmacy sells. I like Nuun during runs, especially in the hotter months, since the luke warm plain water half way through my run is not nearly as palatable as Nuun flavored water. After any distance run I drink a glass of Nuun almost immediately. When I pre-hydrate I follow the pharmacist’s recommendation of one glass of electrolytes after every two glasses of plain water.

I’m excited for the new Nuun Energy. I don’t consume a lot of caffeine, but like the option of a cold, low-calorie, caffeine-laden drink for summer afternoons if needed. I’m rather sensitive to the flavor of most sweeteners that are not sugar, so the addition of stevia leaf as sweetener is disappointing to me, but if you’re not as picky as me about your low-calorie sweeteners (like Matt above), you’ll like the new varieties very well.