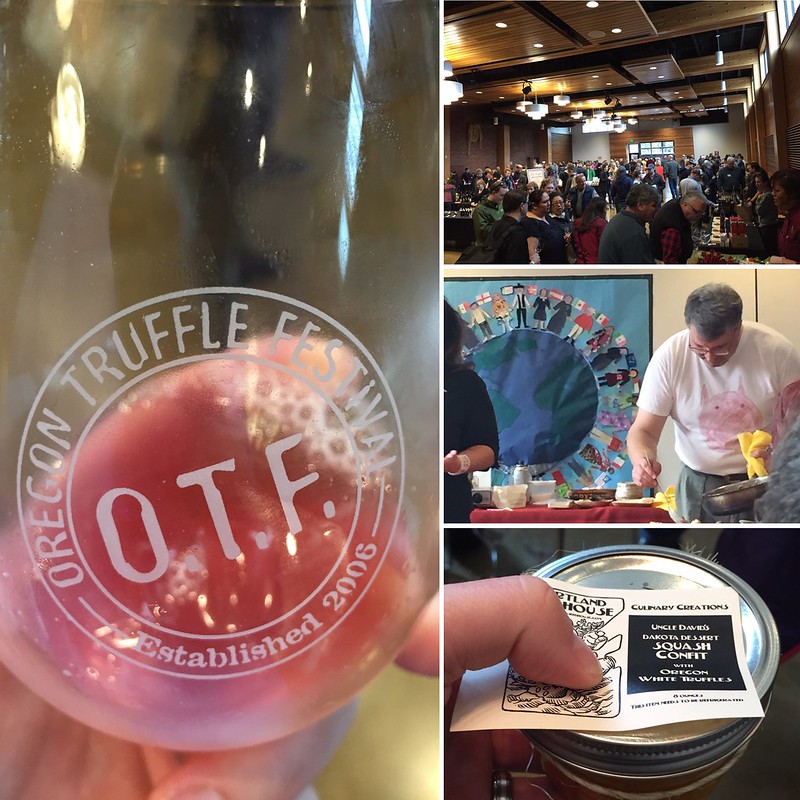 Run Oregon loves running - that's no surprise. But we also love the Pacific Northwest and all that it has to offer. Running is a part of us, but it does not fully define us. In our new "Make a Day of It" feature, we aim to showcase some great local non-running events and highlight where to run and how to make the most of your experience! The next installment of this series is Oregon Truffle Festival! First the running: Even though the Oregon Truffle Festival events span cities, I am going to keep this centralized to Newberg, as that was the location of the Newberg Fresh Truffle Marketplace (see below for info). One of my favorite routes to run is from Jaquith Park to the North Valley Friends Trail in the northern edge of the city (here is the route). The route is just short of 2 miles one-way, and the paved NVT trail is about a 1-mile loop so you can get nearly a 5 mile run from that point.

I recommend staying on one of the residential streets (like Main Street) for as far as you can due to the fact that it has sidewalks and a bike path. Some of the streets that are more rural have small shoulders, so just be careful of cars. The uphill .4 mile stretch on the Hillsboro Highway (219),from North Terrace Drive to NE Bell Road, features the sidewalk ending – SO BE CAREFUL. This route follows some of the streets that the CPRD Camellia Run runs on, and if you head up the hills any further and you won’t be too far from the Bald Peak Half, an awesomely hill(and hell)acious race.

Of course, you can start from anywhere in Newberg and make your way north to add (or subtract) miles off of this route. The Chehalem Parks and Rec Department also has a list of trails, but some of them end up being relatively short. However, it appears to be their desire to eventually connect most or all of them to create up to 70 miles of connected trails. Their website seems a little outdated, so we can not vouch if the full connectivity has been created yet. Let us know if you know (or are up for some self-exploration)!

Did you know that, “In the rarefied world of truffles, Oregon is known as the premier center of research and expertise outside of Europe. Oregon is also blessed with an abundance of wild truffles with culinary qualities equal to those of Europe, and as with French grapes, Oregon has the perfect climate for cultivation of the renowned French truffles.” I did not. Mostly, I knew that truffles are expensive and delicious, and that was pretty much the extent of things.

My wife and I were allowed to attend the Newberg Fresh Truffle Marketplace, held at the Chehalem Cultural Center (there is also one in Eugene on January 31). While we were allowed as guests, tickets cost only $15 (or $22 with wine tasting and a commemorative glass). There was a wide range of vendors within the marketplace, from wineries, distilleries, and breweries to artisanal cheese, meats, and oils – not to mention truffles. I was very partial to the up and coming Wolves & People Farm House Brewery, which was pouring samples. I can’t wait for their brewery to open up – word on the street is it’s going to be amazing. We also got to take in some cooking demonstrations, which were engaging, funny, and delicious all rolled into one.

The atmosphere was alive and fun. Even us novices never felt out-of-place, nor were we make to feel uncomfortable by not knowing the basics around truffles.

Events within the Oregon Truffle Festival:

The Oregon Truffle Festival is in its 11th year, and has now expanded to be nearly month-long festival that takes place in Eugene and the Newberg/Yamhill area. From the Joriad (i.e. Dog truffle-sniffing championships) in Eugene on January 16-17, to a series of dinners and events in the Willamette Valley from January 22-24, to a flurry of gatherings back in Eugene from January 29-31, there is something unique for everyone! There is a Fresh Truffle Marketplace in Eugene this upcoming weekend, so I highly recommend heading down there and partaking. Even though this year’s festival is over half done, make sure you keep this on your radar for 2017.

Cost: Varies depending on event, but many sell out well in advance so don’t dilly-dally. Consider making a weekend of it and taking in a bunch of great events as well.